It’s all been building to this. Today will see one person crowned the 2016 GT Academy International champion, beginning their path to becoming a race car driver as part of the Nissan Driver Development Program. Less than three months later, the winner will be making their competitive debut alongside Jann Mardenborough at the 2017 24 Hours of Dubai in January. You can watch it all unfold above, starting at 14:00 Silverstone time (click here to convert). 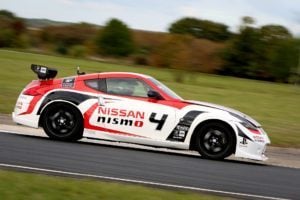 Yesterday’s events saw another competitor eliminated from each of the six regional teams. Each team’s mentor hand-picked the two teammates that would fight for their survival via head-to-head racing in the tried and true 370Z race cars.

As expected as we near the end of race camp, the racing was incredibly close. For Ponpon Naraipitak (Thailand) and Francisco “Quattro” Adriano IV (Philippines), the race was a chance to shine, as they blitzed their competition and earned their place in the final day. Pandu Hartanto of Indonesia would unfortunately falter after a week of consistency, his mistake allowing Catra Felder to advance. The remaining dozen are listed below:

Looking to catch up before the race gets underway? Check out our previous articles: