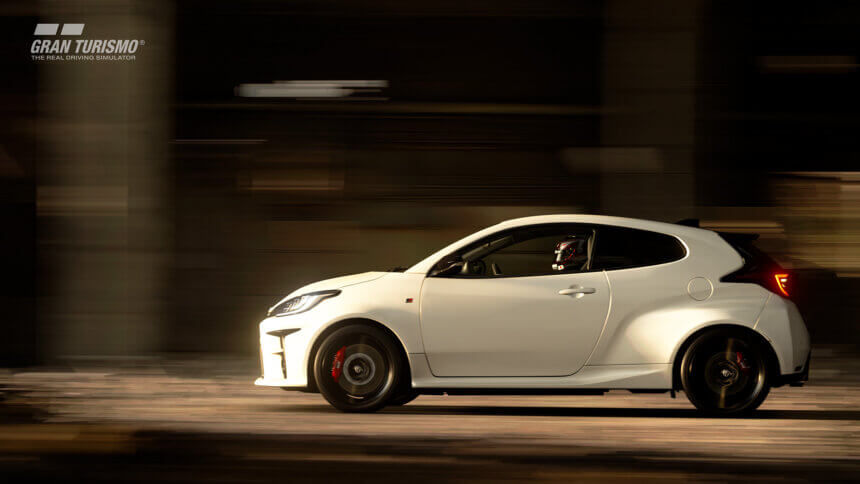 In addition to releasing the new Toyota GR Yaris into GT Sport today, Sony and Toyota Gazoo Racing are running a rather exciting competition. Four lucky users could find themselves winning a PlayStation 5, courtesy of the homologation special hatchback.

Just like the in-game time trial, this particular GR Yaris competition will run from now until December 13. You’ll need to get to work in GT Sport‘s livery editor and Scapes, along with conjuring up some prose, but ultimately all you need to do is Tweet to be in with a chance of winning.

To be eligible, you must apply four Toyota GR decals to the car in the livery editor: one on the leading edge of the hood; one on the rear bumper; and one on the lower door panel on each side. The relevant decals also came to the game in the 1.62 update. You may, if you wish, create a livery for the car but it may only use the official Toyota Gazoo Racing colors of red, black, and white.

From there it’s simply a case of crafting a Scapes image. Just pick one of the 1,235 Scapes locations in the game, and place the GR Yaris into the scene. You can use any of the vehicle, camera, or effects settings to create your shot, so long as it is within the game’s scope. Images edited outside of GT Sport aren’t permitted.

Once you have your image, you need to submit it via Twitter. This will require you to follow the official Toyota Gazoo Racing global Twitter account — @en_toyota — and Tweet them with the official competition hashtag of #GR_Yaris_Dream. However you’ll also need to compose a few words on how the image fulfills your particular dream with the GR Yaris. You may only submit one image per entry, and only up to three entries in total.

When the competition closes, Toyota will select one overall winner and three runners-up, all of whom will win a PlayStation 5. You only have a month, so get photographing!

PlayStation 5
51 Comments Discuss this post in our forums...
Test Your Badge Knowledge With Our Car Logo Quiz

Gran Turismo Series 38 Apr 12 by Andrew Evans
As players are waiting for some good news around PlayStation 5’s Gran Turismo 7, a development over the weekend could mean that Gran Turismo will also head to the world…

Gran Turismo Sport 509 Apr 12 by Andrew Evans
A new week means a new set of GT Sport Daily Races to get to grips with, and this week’s trio of events brings a mixture of pace to satisfy…

Gran Turismo Sport 509 Apr 5 by Andrew Evans
There’s a fresh set of GT Sport Daily Races now available, with players taking race cars — albeit in name alone in one case — to three of the game’s…