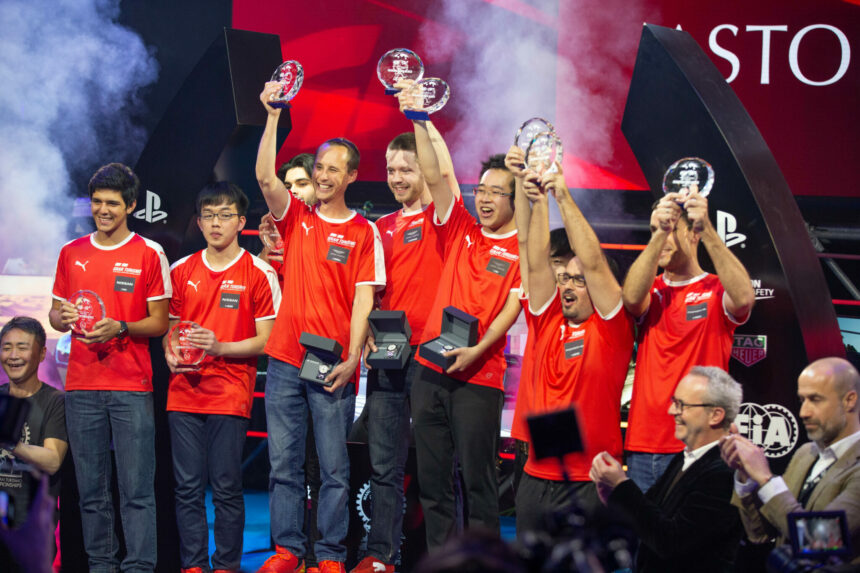 In the curtain-raising Manufacturer Series event at the Paris World Tour, Team Aston Martin has taken a thrilling victory.

For the World Tour, the Manufacturer Series was a four-race affair. Each of the team’s three drivers took a round each, with a final, double-points race using the whole crew. 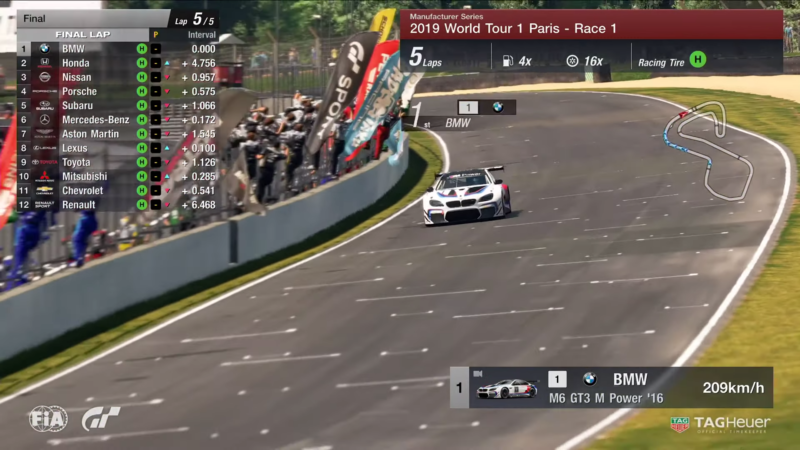 Aston Martin was on the back foot after qualifying for the first round at Brands Hatch. In a field separated by less than a second, the team’s Japanese driver Yoshiharu Imai could only place the Vantage Gr.3 in tenth.

BMW’s Nicolas Rubilar took pole position at the last gasp in the top-six superpole shootout, ahead of Renault and Honda. Once again, the Nissan team of the three regional champions Ryota Kokubun, Mikail Hizal, and Nations Cup champion Igor Fraga, was a hot favorite, but could only place fifth. Champions Lexus meanwhile started just ninth.

As the flag dropped for the five lap race, the top five quickly escaped from the rest. Rubilar in particular managed to work out a healthy advantage in the BMW M6, while David Dolinsky seemed to be fighting with the twitchy Renault RS01 as Thomas Leonhart sent the Honda NSX past him, unusually around the outside of Hawthorn.

On lap three, the Renault won, as Dolinsky dropped a tire onto the dirt at Clark Curve and span. It proved the defining incident of an otherwise relatively serene race, with Renault falling to last.

In the end, Rubilar coasted to victory, followed home by Leonhart’s NSX and Fraga in the Nissan GT-R. 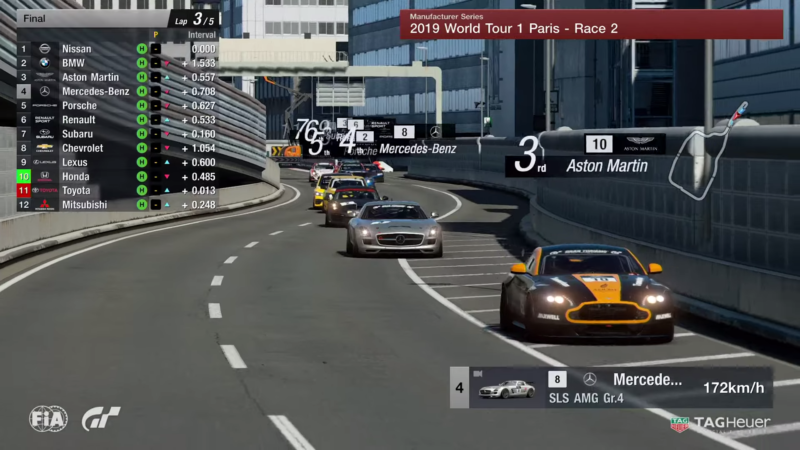 The racing moved to Gr.4 and the Tokyo city courses, and the action started almost immediately. Yuta Tsunashima in the BMW M4 pulled out an advantage of his own while Porsche and Nissan scrapped over second place — Shunichi Arai in the Honda NSX had dropped from second to sixth even before the end of the first lap.

Kokubun made the GT-R’s straight line pace count and dragged clean past Sergio Fonseca in the Cayman. Soon he was on the back of the M4 as Tsunashima made an error in the first complex, but rather than attempt the pass at the hairpin he opted to use the power on the fast back section.

Further back, Lewis Bentley in the Corvette and Facundo Dudulec in the front-wheel drive Megane were making huge gains. Heading into the hairpin on lap four they were three wide with the fading Cayman — all coming out unscathed bar some traded paint.

Thomas Compton-McPherson was quietly dragging the Vantage Gr.4 up through the pack too, gaining a place each lap on average. Eventually he came home in second, behind the Nissan and ahead of the BMW. That left those two teams tied at the top of the table. 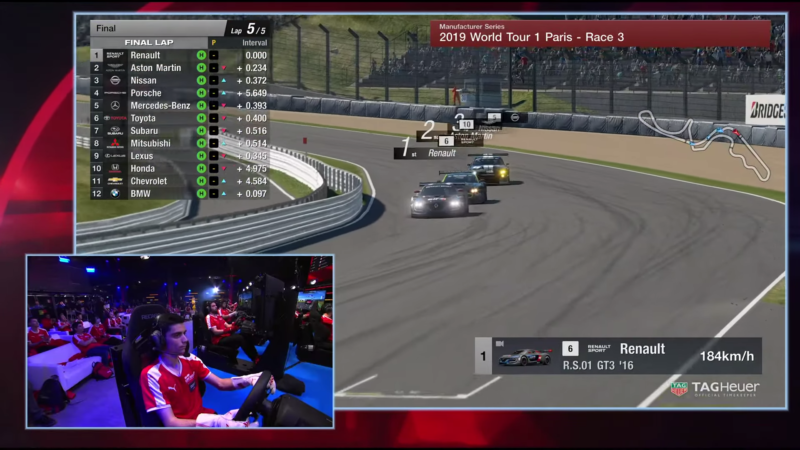 With European champion Mikail Hizal on pole in the Gr.3 GT-R, it looked like only a major incident could stop Nissan from taking the overall lead. The GT Sport World Tour duly delivered.

On cold tires, Hizal took a little too much speed into the first turn and understeered onto the astroturf. He wasn’t alone — it was a disastrous start for Mike Zocher in the BMW too, who followed Hizal off the track, and Yasushi Fujioka also picked up a five-second penalty in the Chevrolet.

This all allowed Christopher Marcell in the Aston Martin to disappear up the road, ahead of Pedro Marzan in the Mercedes AMG GT. Coque Lopez had managed to stay clear of the first turn incident too, and stole second with an audacious pass at the end of the first lap.

Avoiding the chaos behind them, with six cars trying to get through the Casio corner at once, Aston Martin and Renault were setting the pace. Marcell looked to have the win, but Lopez repeated his first lap pass right at the death to get the RS01 across the line first. Nissan came third — enough to take the overall lead — with Mercedes demoted from fourth to ninth with a post-race penalty. 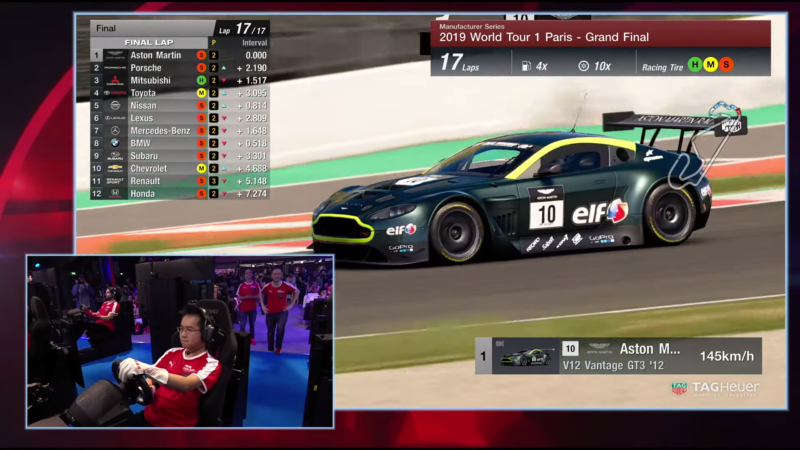 Until now, all races had used the same — racing hard — tires. For the final round, teams had to use all three tire compounds, with all three drivers required to take part in the 17-lap race.

That threw some strategy into the mix. Polesitters Renault and championship leaders Nissan both chose to use the durable but slow hard tires at the start. That soon saw them swamped by cars on softer compounds, particularly Shogo Yoshida in the soft-tired Mitsubishi Lancer.

Soon though all concept of strategy was out of the window. A huge incident on lap three at the Banc Sabadell corner caught up four cars at once, including Fraga’s Nissan GT-R and Bentley’s Corvette which had also carved through the pack on soft tires.

That spread the field out a little, shortly ahead of the first pit window. The majority of teams moved on to the hardest tire still available to them, but Renault made an error and took a second set of hard tires. That meant another stop on the next lap for the mediums, dropping the polesitters to last.

Kokubun was involved in a recovery drive, pulling the Nissan up from tenth to seventh. By the time of the second pit window, he was hot on the tail of the Lexus and chose to stay out for one more lap before handing the car, and soft tires, for Hizal to take to the line.

Having used both softest sets to build a lead, Mitsubishi was the sole car on hard tires for the end of the race. With a potential deficit of two seconds a lap to the Aston Martin on soft tires behind, it didn’t look like it would be enough.

Sure enough Imai was able to close up and, starting the penultimate lap, sweep past the Lancer. With double-points that was enough to give the team a huge advantage in the championship — even getting onto the podium would not have been enough for Nissan to dislodge Aston.

Mitsubishi lost another place to Porsche on the final lap — again the tire differential coming into play — but ultimately rounded out the podium. 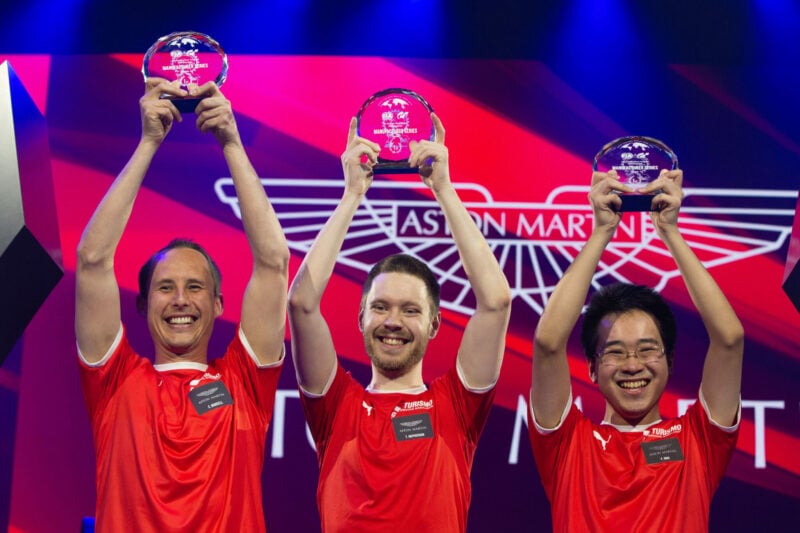 That was enough to give Aston Martin the race win and the overall title, moving up two steps from its World Final position. Fifth place saw Nissan occupying the second step, while Porsche took third in both race and the championship standings.

Gran Turismo Sport 176 Feb 24 by Andrew Evans
The latest game update for GT Sport has arrived. Weighing in at 176.8MB it is, as expected, not a major content update, but it does bring along some interesting changes…

Gran Turismo 7 255 Feb 23 by Andrew Evans
Gran Turismo fans will have to wait a little longer to get their hands on the next full entry in the series, as Sony has revealed the game won’t make…

Gran Turismo Sport 1323 Feb 22 by Andrew Evans
A new set of GT Sport Daily Races has arrived, and the next seven days will put you in racing action at circuits — real and fictional — around Europe.…

Gran Turismo Sport 176 Feb 19 by Andrew Evans
Somewhat unexpectedly, there’s a new update coming to GT Sport this month. It’ll be the first update to the game this year, following on from the 1.62 update back in…

Gran Turismo Sport 2245 Feb 18 by Andrew Evans
Updated February 20: Since we posted the details below, all corresponding information has been removed from the official Gran Turismo website. We’ll update this article with more information as we…

Gran Turismo Sport 1323 Feb 15 by Andrew Evans
The latest set of GT Sport Daily Races, running for the next seven days, will see you recreating the golden era of rally in a rather unusual event — as…

Gran Turismo Sport 2245 Feb 12 by Andrew Evans
Polyphony Digital has released more information on the scheduling for the 2021 season of the Gran Turismo FIA Online Championship. Although we don’t have a full race calendar yet —…