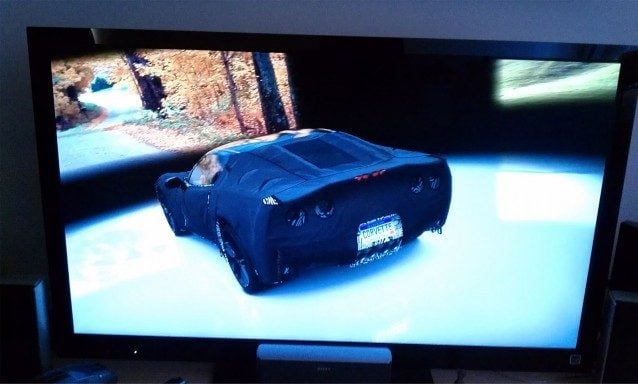 Two very curious reported discoveries in GTPlanet’s Forums are attracting quite a bit of attention today.

The most significant comes from GTPlanet user jstickboy13, who reports having seen a camouflaged Corvette C7 appear during one of the game’s “screen saver” sessions, which displays race replays or Photomode locations during period of player inactivity.

GTPlanet user edwinpr also saw the car, and was able to verify jstickboy13’s claims with the following video.

Close observers will note the car’s license plate appears to display the word “POLYPHONY” in the blue stripe along the top. Those following development of the new Corvette will recognize it from many recent spy shots which have been published in the automotive media.

The inclusion of a camouflaged car is, of course, not unprecedented for the Gran Turismo series; GT5 Prologue introduced a camouflaged version of the Nissan GT-R, which was later updated in the game after the car was officially unveiled.

The second curious sighting comes from GTPlanet user Ferraridude308, who reports having spotted a striped Lamborghini Aventador in Gran Turismo 5’s online Photo Stream website. However, since this blog post was originally composed, the suspicious stripes have since been proven to be shadows cast on the car.

As always, stay tuned in to our forums as our community continues to analyse, discuss, and verify these claims.