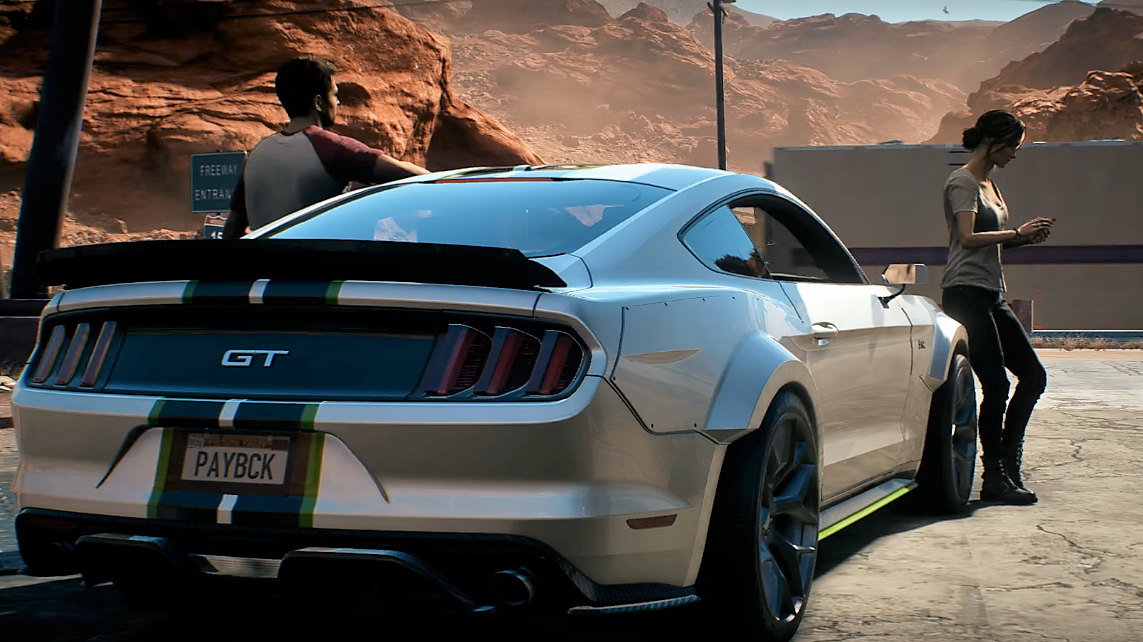 A new trailer video for Need for Speed Payback sees the expected deluge of E3 racing game coverage getting underway a little early.

Shown during the EA Play event, the trailer depicts the game’s heist mechanic, using the same event seen in the original reveal. The aim is the theft of a Koenigsegg Regera from the back of a moving truck.

One of the big new additions to NFS this time around is the ability to play as all three protagonists. This is in a similar vein to Grand Theft Auto V, but as far as we can tell there’ll be no switching on the fly as is available in GTA V, with the game switching to the different characters according to the script. Nevertheless, this should give missions a much more dynamic feel than in past NFS games.

The heist starts with the player, as ‘Tyler’, driving a 2017 Ford Mustang GT in a bid to catch up with the truck holding the cargo. We hear the team over the radio giving the player advice on how to deal with the situation. The other two characters are Mac, The Showman, and Jess, The Wheelman. She’s in the passenger seat of the Mustang for the hijacking.

As Tyler tries to catch up to the truck, several BMW X6 SUVs join the chase to make sure he fails his mission. The player must bash and barge the SUVs off the road or into roadside apparatus. In a sequence that could belong in Burnout’s Road Rage mode, Tyler bashes the Bimmers into road signs, other cars and light poles.

As you can probably tell, somebody really doesn’t want Tyler to steal the Regera. That somebody is ‘The House’, a major cartel which controls the underworld of Fortune Valley, the setting for Payback. If something illegal is happening in Fortune Valley, you can bet The House is behind it.

Developer Ghost Games says that Fortune City is the largest world that’s ever been built for a Need for Speed game. It’s also the most open, as evidenced by the Mustang’s trip off the beaten track in a bid to catch up to the truck.

The physics model is slightly different than last year’s offering. Gone is the choice of arcade or sim-cade modes. This time around, Ghost Games has built a handling model dubbed ‘hero’ physics.

This gives the player the impression they’re driving in an action movie. The new handling model makes it easy to look cool when you’re weaving through traffic, or trying to outrun the cops.

After shaking off the BMWs the player catches up to the truck. This starts a cut scene, with Jess climbing from the Mustang and jumping onto the trailer. It’s very reminiscent of the original The Fast and The Furious movie.

The scene continues in a shower of sparks until Jess, driving the Regera, explodes out of the back of the truck. The camera switches to Jess and the player gains control of her for the next sequence.

Need for Speed Payback brings some new aspects to the long-running franchise. This kind of high-octane action feels like a large departure from last year’s Need for Speed. Those looking for their arcade fix in addition to feeling like you’re Dominic Toretto’s best friend should look no further when Payback releases this November.

Andrew Evans · Jun 11, 2017· Comments
If you like your racing game action well onto the arcade patch of the Venn diagram of driving, October looks set to be a decent month for you. Need for Speed Payback, the 2017 release from Ghost Games, will head to PlayStation Plus as one of the month’s two free games.

Kyle Patrick · Jun 11, 2017· Comments
If you’ve been driving around Fortune Valley looking for something new, you’re in luck. The Need for Speed Payback June update landed earlier this week, and it brought a variety of new content to the game.

Brendan Rorrison · Jun 11, 2017· Comments
Ghost Games has detailed the latest update for 2017’s Need For Speed Payback. Among a host of gameplay changes, some new content will arrive for players with both paid and free additions arriving next month.

Kyle Patrick · Jun 11, 2017· Comments
A new update has touched down for Need for Speed Payback today. Alongside multiple fixes and changes to the game itself, it introduces two DLC vehicles that should be plenty familiar to movie fans.

Joe Donaldson · Jun 11, 2017· Comments
The highly requested online free roam is now available for Need for Speed Payback in its latest update. Dubbed “Alldrive: Hangout”, this new feature allows gamers to cruise the streets of Fortune Valley with their friends.

Kyle Patrick · Jun 11, 2017· Comments
The folks at Ghost Games rang in the new year with Need for Speed Payback news. As it turns out, a fan-favorite feature is returning in the form of online free roam.

Brendan Rorrison · Jun 11, 2017· Comments
Ghost Games has detailed the first big content update coming to Need For Speed Payback, with the open world racer adding a host of free and paid content next week. Let’s break down what players should expect on December 19.

Joe Donaldson · Jun 11, 2017· Comments
The latest release from the long-running Need for Speed series is here. With plenty of action, Payback looks to entice gamers through street racing and in-depth customization.

Kyle Patrick · Jun 11, 2017· Comments
After an insanely busy couple weeks in the world of sim racing, Ghost Games has revealed the full car list for its arcade racer, Need for Speed Payback.