Electronic Arts has shown off the first trailer for the next NFS game. Titled Need For Speed Payback, it launches November 10 worldwide.

The trailer follows an earlier teaser image posted by Ghost Games, the same team responsible for 2015’s Need For Speed. While it doesn’t give much away — that’s what EA’s E3-adjacent EA Play event will be for — there’s still plenty contained within the 85-second trailer.

After the perpetual night setting of the last game, fans will notice a full day cycle on display. There’s been a change in setting as well, to the fictional area of Fortune Valley. From the sounds of it, this new location should offer a lot more variety than the previous game. The official site lists a city (Silver Rock), desert, mountain, and canyon. It all seems much more about open-world exploring than the relatively hemmed-in nature of the last game.

As you’d expect of a modern NFS title, there’s a storyline. Players will assume the role of Tyler Morgan, former street racer. Your job is to take down The House, a cartel that has its hands in the pockets of the local business and cops. Yes, the trailer wasted no time using “the house always wins”.

Cars will be divided into five categories in Payback: Race, Drift, Off-Road, Drag, and Runner. If that sounds not only similar to the last game to you, but also to The Crew, you’re not alone. With the second installment of that franchise set to launch soon, it’ll make for an interesting comparison.

Like any driving game, the big focus here is on the cars. The trailer kicks off with a glimpse of the latest Mustang RTR, a car built by Vaughn Gittin Jr. Soon after, we watch as Tyler’s crew loads a Koenigsegg Regera into a trailer.

Next, we’re treated to a botched semi-truck hijacking straight out of the Fast & Furious franchise. It’s unclear if this is the same Regera-carrying truck or not. Nonetheless, we spotted what appears to be the new Dodge Challenger SRT Demon here, in addition to the big, burly BMW X6M.

Petrolheads will no doubt be focused on the big reveal of the 2018 BMW M5, however. BMW hasn’t even officially revealed it in the real world yet! This isn’t the first time NFS has been a step ahead in this regard, though. 2015’s Need For Speed included the smaller M2 before it went on sale.

The M5 will have some high-powered four-door competition too. The Porsche Panamera Turbo makes a brief appearance in the video, confirming that while the EA exclusivity deal may be dead, Porsches will still appear in NFS titles.

Other cars we spotted in the trailer: 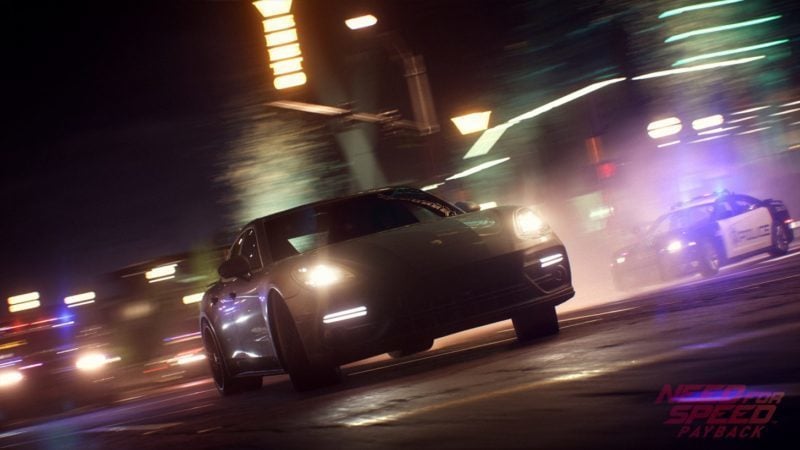 When Is It Out?

EA has announced Need For Speed Payback will launch worldwide November 10 on PS4, XB1, and PC. As is increasingly common these days, there will be a Deluxe Edition. It will include exclusive in-game goodies, and provide early access starting November 7.

In addition, all pre-orders will receive the Platinum Car Pack. This will include five pre-tuned versions of cars already available in the game (though Ghost only lists four):

EA Play will provide us our next look at Payback — including gameplay — on June 10. We came away mildly disappointed with 2015’s Need For Speed, largely due to the handling model. Due to this we’ll be keeping an eye on Payback at E3 to see what improvements Ghost has made.

Andrew Evans · Jun 2, 2017· Comments
If you like your racing game action well onto the arcade patch of the Venn diagram of driving, October looks set to be a decent month for you. Need for Speed Payback, the 2017 release from Ghost Games, will head to PlayStation Plus as one of the month’s two free games.

Kyle Patrick · Jun 2, 2017· Comments
If you’ve been driving around Fortune Valley looking for something new, you’re in luck. The Need for Speed Payback June update landed earlier this week, and it brought a variety of new content to the game.

Brendan Rorrison · Jun 2, 2017· Comments
Ghost Games has detailed the latest update for 2017’s Need For Speed Payback. Among a host of gameplay changes, some new content will arrive for players with both paid and free additions arriving next month.

Kyle Patrick · Jun 2, 2017· Comments
A new update has touched down for Need for Speed Payback today. Alongside multiple fixes and changes to the game itself, it introduces two DLC vehicles that should be plenty familiar to movie fans.

Joe Donaldson · Jun 2, 2017· Comments
The highly requested online free roam is now available for Need for Speed Payback in its latest update. Dubbed “Alldrive: Hangout”, this new feature allows gamers to cruise the streets of Fortune Valley with their friends.

Kyle Patrick · Jun 2, 2017· Comments
The folks at Ghost Games rang in the new year with Need for Speed Payback news. As it turns out, a fan-favorite feature is returning in the form of online free roam.

Brendan Rorrison · Jun 2, 2017· Comments
Ghost Games has detailed the first big content update coming to Need For Speed Payback, with the open world racer adding a host of free and paid content next week. Let’s break down what players should expect on December 19.

Joe Donaldson · Jun 2, 2017· Comments
The latest release from the long-running Need for Speed series is here. With plenty of action, Payback looks to entice gamers through street racing and in-depth customization.

Kyle Patrick · Jun 2, 2017· Comments
After an insanely busy couple weeks in the world of sim racing, Ghost Games has revealed the full car list for its arcade racer, Need for Speed Payback.