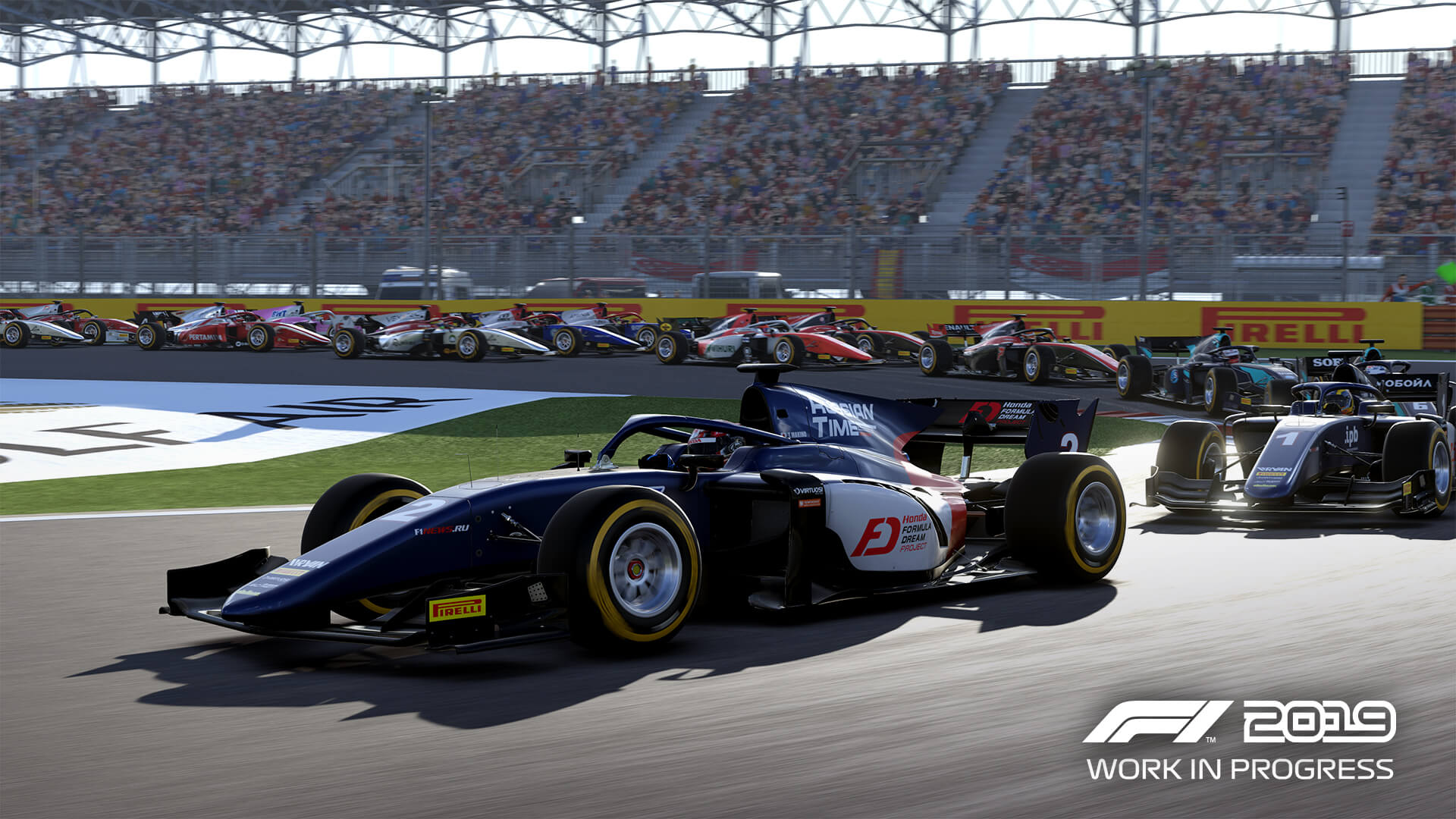 We continue our coverage of F1 2019’s first media hands-on event with a handful of gameplay videos from the title. These will include players’ first real look at the new Formula 2 class, but first, here’s a showcase of the game’s improved night-time visuals.

Codemasters has been working on F1 2019 for the last two years. While we’d never call last year’s title a bad-looking game — at least, we didn’t in our review — the team has spent the time tweaking the visuals. At first, even we’ll admit we couldn’t see much of a difference, but a direct back-to-back comparison during last week’s presentation confirmed it. The biggest change is undoubtedly the lighting engine, specifically during night races.

Modern F1 cars are incredibly complex shapes, and 2019 adds a great deal of subtlety and complexity to reflections. You can see it best in the above videos, featuring a Renault lapping Bahrain circuit.

Also notable above is the improved atmospheric visuals. The spotlights dotting the track all feature a bit of a haze around them, giving a palpable sense of depth to the air. We saw this elsewhere in the game during the early hours too, with that slightly misty feeling of morning.

None of this is reinventing the wheel, but it’s a solid set of tweaks to bring the visual experience closer in line with the real thing. The benefits aren’t just for players either: with the F1 esport series set to be even bigger this year, the game’s broadcast appeal is important too.

In addition to the replay above, you can check out the onboard below:

Andrew Evans · May 5, 2019· Comments
Motorsport is proving just about impossible to stage right now, with quarantine measures, travel restrictions, and even just concern for the safety of drivers, team personnel and fans. With the backdrop of the current global climate, esports has really started to take its chance to shine.

Michael Leary · May 5, 2019· Comments
If you have yet to take last year’s Formula One game for a spin, now is the perfect time. There’s now a free trial of F1 2019 available on Steam, Xbox Live, and the PlayStation Store, until March 18. That gives players eight days to dive into Codemasters’ 2019 F1 effort and see what all the fuss is about.

Andrew Evans · May 5, 2019· Comments
F1 fans, your long winter doldrums are nearly over. The 2020 Formula One World Championship gets underway this weekend with the traditional curtain-raiser in Australia.

Andrew Evans · May 5, 2019· Comments
The F1 Esports New Balance Pro Series reaches its climax this evening, and for the first time in three years there’ll be a new champion lifting the trophy.

Michael Leary · May 5, 2019· Comments
‘Tis the season to be streaming. With the holiday season in the air, Sony has added some new games to its PlayStation Now cloud gaming service. For sim-racing fans, one game in particular stands out among the others.

Michael Leary · May 5, 2019· Comments
The latest update for F1 2019 is now available on the PC and PlayStation 4 platforms. Version 1.08, dubbed the “Visual Update”, brings updated liveries and sponsor logos to all cars in the game.

Kyle Patrick · May 5, 2019· Comments
The latest version of F1 2019 is now available across all platforms. Version 1.07 follows a quick succession of updates since the game’s late-June release, focusing in on detail changes.

Kyle Patrick · May 5, 2019· Comments
The latest patch for F1 2019 landed on PC and PlayStation 4 earlier this week. It’s a small one, bringing with it a handful of useful improvements to Codemasters’ latest.