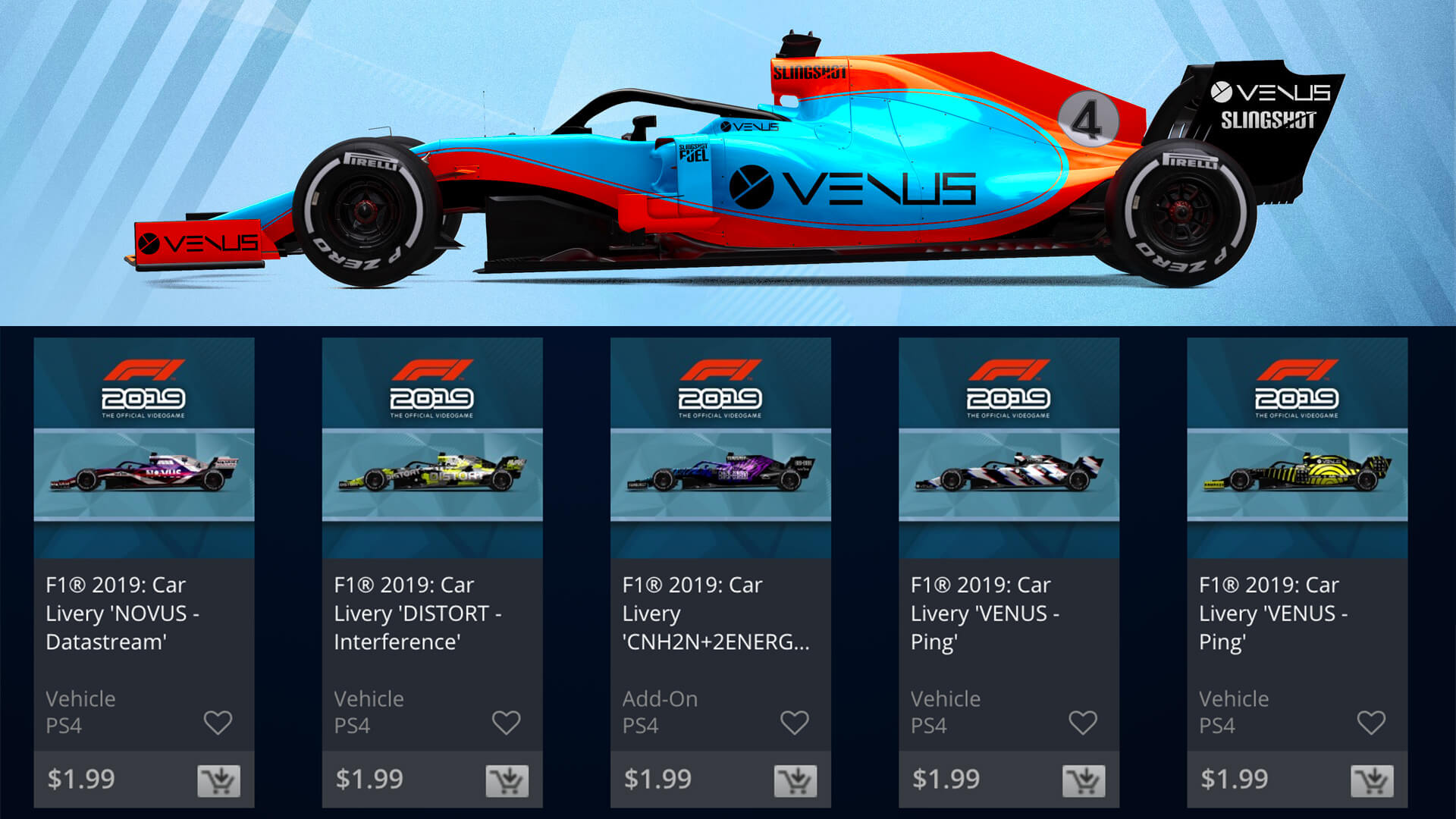 F1 2019 is now available across the globe. It introduces a variety of new features to Codemasters’ long-standing franchise, including a rather controversial one: microtransactions.

We learned about the inclusion of microtransactions before launch from Codies itself at a preview event. There, game director Lee Mather explained that customization would be central to the game’s online modes this year. Players would use the new spec F1 car, with multiple liveries available to tweak to their own tastes. Their digital avatar would get in on the action too, with custom helmets, outfits, and gloves.

Players can unlock a good chunk of these items via multiplayer actions in F1 2019. However, some are only available through real-cash purchases. With the game now out, we have a clear idea of the associated costs.

It’s important to note that these liveries are all editable, though not as freely as elsewhere in the genre. Players can tweak the colors, usually anywhere from two to four per livery, to their specific choices. It’s certainly far more DriveClub than Forza or Gran Turismo in terms of creative freedom.

As it stands, there are more options available to players via in-game unlocks than microtransactions. It’s unclear how the numbers will grow post-release, however.

Andrew Evans · Jun 30, 2019· Comments
Motorsport is proving just about impossible to stage right now, with quarantine measures, travel restrictions, and even just concern for the safety of drivers, team personnel and fans. With the backdrop of the current global climate, esports has really started to take its chance to shine.

Michael Leary · Jun 30, 2019· Comments
If you have yet to take last year’s Formula One game for a spin, now is the perfect time. There’s now a free trial of F1 2019 available on Steam, Xbox Live, and the PlayStation Store, until March 18. That gives players eight days to dive into Codemasters’ 2019 F1 effort and see what all the fuss is about.

Andrew Evans · Jun 30, 2019· Comments
F1 fans, your long winter doldrums are nearly over. The 2020 Formula One World Championship gets underway this weekend with the traditional curtain-raiser in Australia.

Andrew Evans · Jun 30, 2019· Comments
The F1 Esports New Balance Pro Series reaches its climax this evening, and for the first time in three years there’ll be a new champion lifting the trophy.

Michael Leary · Jun 30, 2019· Comments
‘Tis the season to be streaming. With the holiday season in the air, Sony has added some new games to its PlayStation Now cloud gaming service. For sim-racing fans, one game in particular stands out among the others.

Michael Leary · Jun 30, 2019· Comments
The latest update for F1 2019 is now available on the PC and PlayStation 4 platforms. Version 1.08, dubbed the “Visual Update”, brings updated liveries and sponsor logos to all cars in the game.

Kyle Patrick · Jun 30, 2019· Comments
The latest version of F1 2019 is now available across all platforms. Version 1.07 follows a quick succession of updates since the game’s late-June release, focusing in on detail changes.

Kyle Patrick · Jun 30, 2019· Comments
The latest patch for F1 2019 landed on PC and PlayStation 4 earlier this week. It’s a small one, bringing with it a handful of useful improvements to Codemasters’ latest.