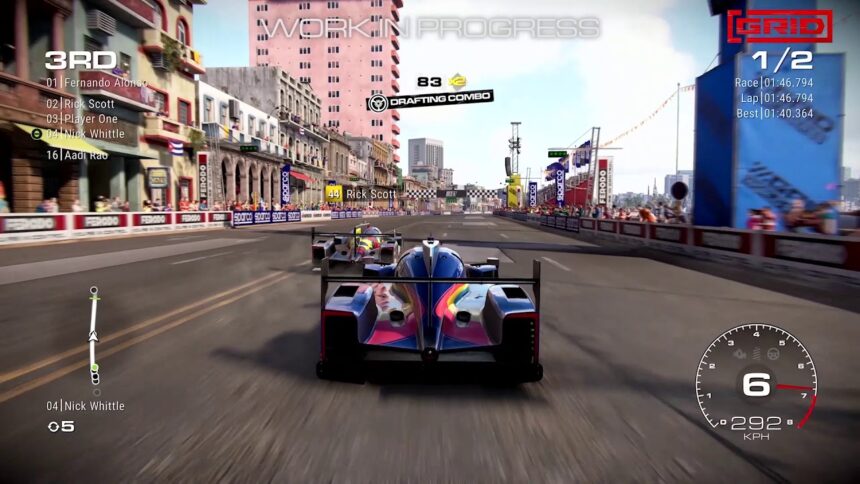 After revealing that the IMSA DPi prototypes are coming to GRID, Codemasters has shared the first in-game footage of the race cars in action.

This taster video gives gamers a look at Cadillac’s DPi-V.R, in a one-make race around the new Havana street circuit. The Cuban street circuit has plenty of tight corners, offering up passing opportunities in the braking zones. Check it out below:

The Caddy is unsurprisingly quick, knocking on the door of 200mph at multiple points on the track. The player isn’t quite fast enough to pass the lead car though: that’s none other than Fernando Alonso, whose FA Racing livery also adorns the player car.

The narrow layout of the track forces cars into close quarters, leading to plenty of contact — and the explanation of the Nemesis system.

As drivers bump and grind for place, they alter their relationships with the other championship contenders. Make contact with one AI driver repeatedly and you’ll find they’re now labelled as a nemesis. This increases their aggression around you in particular: they just want to beat you.

This won’t be your only relationship with AI drivers either. Codemasters is including 72 teammate profiles, all with different attributes. In the examples in the video, some may be quick, consistent racers, but lack a team attitude. These ones will ignore your off-track interactions, turning off their radios when you have requests. Others may be less aggressive, needing more hands-on instruction from the player to get their best results.

GRID touches down in October on all major platforms, including Google’s upcoming Stadia.