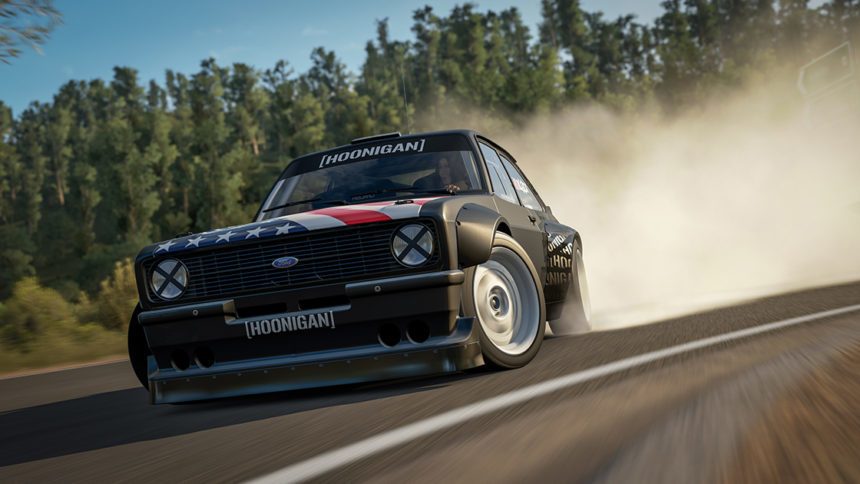 Earlier today, Turn 10 released the newest update for Forza Horizon 3. Weighing in at 690MB, the update expands the Hoonigan offerings in the franchise.

We covered the pack in detail last week when T10 first announced it. As a refresher, here are the seven new vehicles:

We first heard about a Hoonigan pack a whopping ten months ago thanks to drifter Corey Hosford. While his car showed up last year as a visual modification for the S14-generation Silvia, the RWB-fettled Porsche Hosford earmarked is one of the seven new cars.

The Hoonigan car pack also includes the next evolution of Ken Block’s insane “Hoonicorn” Mustang. With a set of turbos bolted on, it boasts a monstrous 1400 hp. It’s not the first car of Block’s to show up in the game either: his Focus RX was one of the stars of the Blizzard Mountain expansion.

If you ask us, the most interesting car may just be the least-powerful. The Ford Escort sounds like it’s right up our alley. Raucous, high-revving nat-asp four cylinder? Check. Light weight? Check. Rear-drive? Check. Sounds like fun.

The pack also introduces a new set of achievements, worth 500 GS. The full list is below:

The Hoonigan Car Pack is available on the Xbox Store for $6.99 USD. Players that pre-order Forza Motorsport 7 will receive the pack in FH3 for free, as well as in FM7 when it releases October 3.