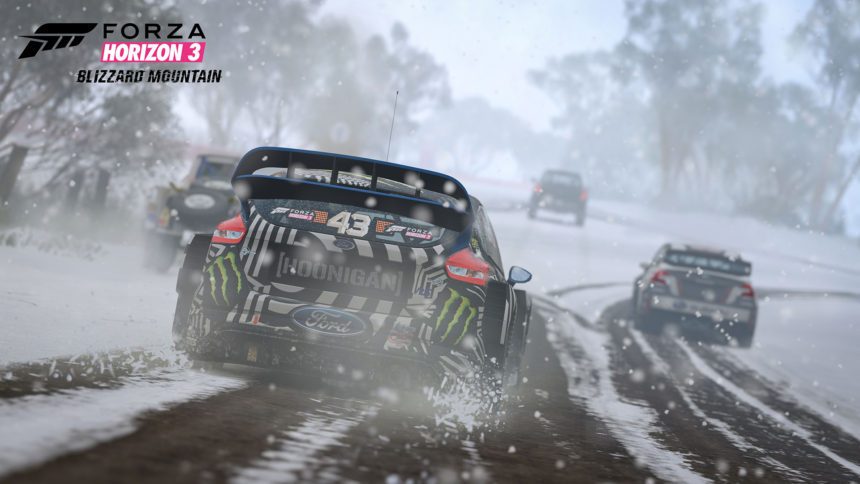 Grab those snow tires and your favorite ride, because snow is falling in Australia. For the first time in the Forza Horizon series, players are going to set off on a wintry adventure atop Blizzard Mountain as they vie for the title of ‘King of the Mountain’.

First teased at the tail-end of November’s car pack reveal, Blizzard Mountain takes players out of their comfort zones and drops them into an all-new playground experience, fighting against the challenging weather conditions of snow, ice, extreme elevations and blizzards.

Included in the expansion will be a new campaign featuring over 50 new events and challenges to compete in, and new race types the likes of which include Hill Climb, Descent and Blizzard race events. If that weren’t enough, players can also expect to find new Bucket List Blueprint and Rivals Events on their mountain adventure, in addition to new bonus boards, beauty spots, and earn 28 new achievements worth 500 Gamerscore.

As those familiar with the series may expect, a new playground is deserving of new rides to explore the terrain in, and Blizzard Mountain delivers with eight new cars fitting for the task(s) at hand. Leading the pack will be Ken Block’s 2016 Focus RS RX, a vehicle previously confirmed for the game a few months back. The remaining new metal is as follows:

The eighth slot is reserved for a new barn find that will hidden somewhere in the snow-covered bounds of the mountain. For those that prefer to know what it is now, you can check it out in the gallery of this post.

To celebrate the release of today’s adventure, we’ll be hosting a live stream this afternoon at 21:00 GMT, and you’ll be able to tag along and explore the snow-covered mountain alongside us. We’ll also be announcing the winners of our Forza Motorsport 6 DLC giveaway: come along and join the fun!

UPDATE: FH3 received a 2.9 GB update coinciding with the release of Blizzard Mountain, but players will need to download the separate 3.66 GB expansion on the Xbox Store before the location appears on the map.