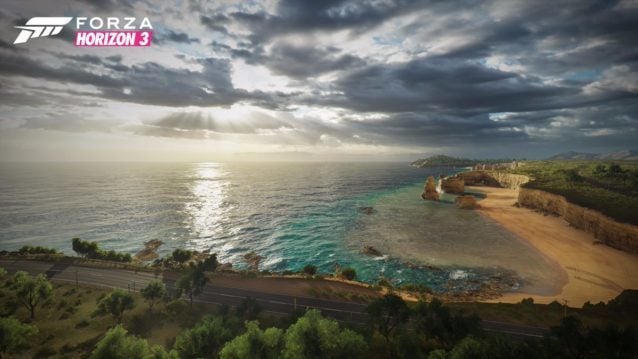 This week’s garage update for Forza Horizon 3 takes on a bit of a different tone from the past 2 weeks. Showcase cars in previous weeks include some modern-era powerhouses and historic sports cars. This week however — the game is changed forever. Ferraris are lovely, and Aston Martins are prestigious, but this week a new entry into the garage roster makes all other competitors in the Horizon festival null and void. Say hello to the… 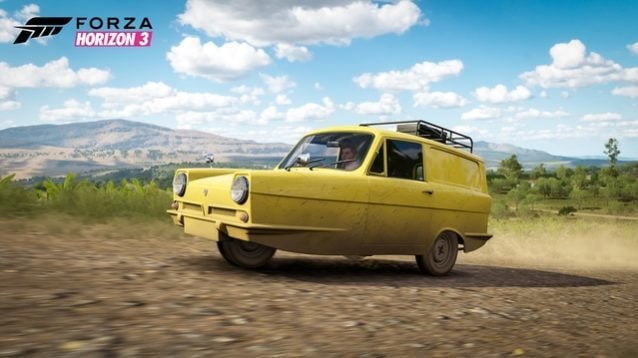 The Reliant Supervan III is a three-wheeled wonder best known by those in the UK for featuring in the hit BBC comedy ‘Only Fools and Horses’, in which the main characters used the car for doing some shady business. Del Boy and Rodney can vouch for the car’s usefulness, however we aren’t quite sure how it will stack up against the Aston Martin GT12.

Viewers of BBC’s Top Gear will also know that Jeremy Clarkson is a fan of the unique car’s smaller sibling — the Robin. Despite being most memorable for being continuously and purposely rolled, Clarkson felt a rare streak of guilt in a recent review:

“Rolling a Reliant Robin on purpose is a bit like putting a tortoise on its back. It’s an act of wanton cruelty.”

Please keep this in mind when you’re tempted to hoon this thing.

What can be assured is that this little custard-colored Reliant will be an absolute blast to drive off-road. The potential for Supervan events online are limitless: off-road outback challenges anyone? 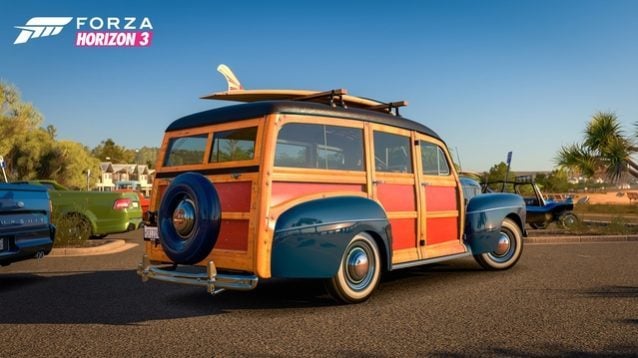 In Forza Horizon 3 there are a lot of cars built from a lot of different lightweight materials, used to make each vehicle as efficient and fast as possible. However, one material that has been criminally left out is wood. Not exactly synonymous with modern car design, the material usually finds it’s home in interiors at best. Fear no longer, woodie fans – the Ford Super Deluxe Station Wagon has you covered. The Deluxe Station Wagon must be one of the fastest bedside cabinets ever produced, packing 100BHP with a V8 engine to boot.

Style-wise, white wall tyres complete that 40s look and a holster on the roof mean you can store your surfboard safely on trips across Australia. This American icon’s hyperbolic name, unique looks and V8 mean you’re sure to turn heads when taking this for a spin. Just don’t expect to beat any Ferraris in a drag-race.

Usually, we get 3 showcase cars complete with renders but this time Playground have only supplied two. However, this week’s overall roster reveal is considerably larger, containing 64 cars you can expect to find at Horizon 3’s launch. The list is included at the bottom of this article. 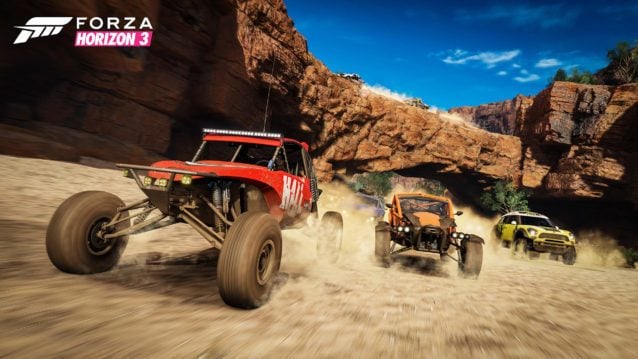 It is this variety of cars and the environment that is helping Horizon 3 to potentially be one of the best digital automotive experiences this year. At E3 2016, Forza Horizon 3 swaggered away with the award for best racing game at the show. It picked up various other accolades from media outlets too, in what was a very successful debut showing. The awards continue to roll in for Playground Games, with FH3 picking up the best racing game award on show at Gamescom.

Gary Slater · Aug 24, 2016· Comments
We suspected that it may be coming sooner or later, but now Turn 10 has officially confirmed the news: Forza Horizon 3 is reaching the end of the road.

Michael Leary · Aug 24, 2016· Comments
It appears Forza Horizon 3 still has some life left in it – at least, enough for what looks to be a final hurrah.

Michael Leary · Aug 24, 2016· Comments
Big savings have once again come to pass for the Forza series, courtesy of Deals With Gold. This week, Microsoft has combined Forza Motorsport 7 and Forza Horizon 3 into a neat bundle. If you’ve yet to make the jump, now is as good of a time as any.

Kyle Patrick · Aug 24, 2016· Comments
Amidst all the news about the upcoming Forza Horizon 4 this past month, an impressive stat on its predecessor flew under the radar. According to Ralph Fulton, FH3 has had over 9 million players since its September 2016 launch.

Brendan Rorrison · Aug 24, 2016· Comments
Xbox Live Gold members can pick up two discounts on substantial Forza DLC. With reductions for Motorsport 7 and Horizon 3, those looking to enhance their experience should have a look at what the sale has to offer.

Kyle Patrick · Aug 24, 2016· Comments
Playground Games is keeping the Forzathon events coming for its open-world Forza spin-off. Players will have regularly-scheduled challenges all the way into February 2018, according to a new set of Xbox achievements.

Gary Slater · Aug 24, 2016· Comments
The latest Forzathon challenges are now live for Forza Horizon 3 players. The focus for this weekend is all on hypercars. Going under the name “Speed Is Key”, the newest challenges will see players putting their foot down in the world’s fastest cars.

Gary Slater · Aug 24, 2016· Comments
This weekend marks one year since Forza Horizon 3 was first released. To celebrate the occasion, the latest Forzathon events offer players a new batch of car and manufacturer-specific challenges.