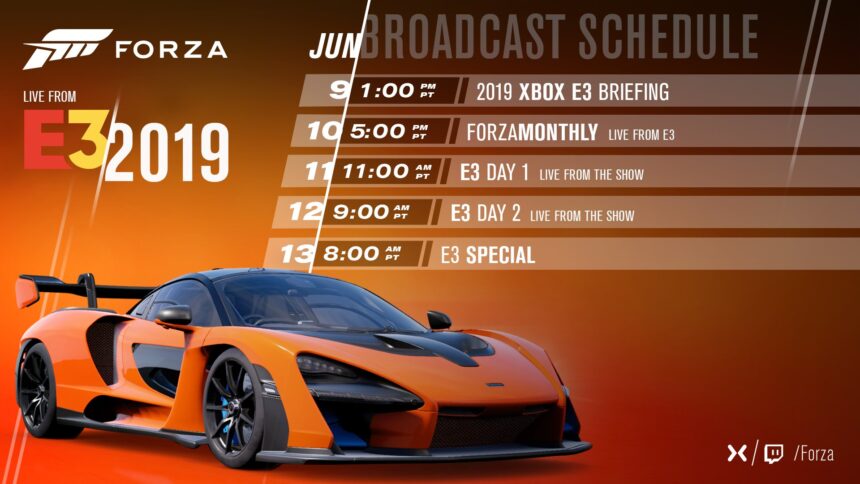 The Forza teams have revealed this month’s major streaming schedule. Sure enough E3 will play a big role, with the Forza Monthly show coming the day after Microsoft’s briefing.

Things will kick off with the mothership’s presser on Sunday afternoon. With Sony sitting out this year’s expo, all eyes will be on Microsoft. We wouldn’t be surprised if the company provides the first real concrete info on its next-generation plans, including the “Scarlett” family of consoles. It has promised 14 first-party reveals for Sunday, too.

That comes off the Redmond-based giant’s buying spree last year, which greatly expanded its developer stable. That included Playground Games, the team behind Forza Horizon 4. Going by the latest tweet from the official Forza account, we should expect plenty of info on the game next starting Sunday:

#XboxE3 is nearly upon us and hype is rising to fever pitch! To celebrate we have numerous livestreams lined up for you over the next few days where we'll take stock of the news coming out of the conference. Save the dates and come join us! https://t.co/RFcsIRzyKk #ForzaHorizon4 pic.twitter.com/oEujI19wz6

Tellingly, only FH4 gets hashtag recognition here. The most likely scenario is a spotlight on the long-awaited second expansion for the title. If rumors are true, it should be a pretty blocky affair…

Forza Monthly will kick off on Monday. Expect a recap of Sunday’s announcements to take the lion’s share of the show. We wouldn’t count out any surprises though: there could be word on the recent ForzaRC private test, and maybe even some cross-promotion for the upcoming $100,000 Le Mans Esport Super Final.

We’re not expecting much on Forza Motorsport 8, however. While Turn 10 recently announced it was “transitioning its weight” to the next title, it’s still early days. We’re sticking to our prediction that the team is skipping a year to align with the next Xbox’s launch. That means this will be the first E3 since 2010 that won’t feature a Forza game reveal.

It would be a pretty bold move if the Forza crew drove the Koenigsegg Jesko and Agera RS all the way down to the show from its Seattle HQ, though!

The live streams will continue through the week, straight from the E3 show floor.

We’ll be keeping a close eye on Sunday’s presentation. Stay tuned for more Forza news over the coming days.