In an awesome demonstration of ‘virtual’ driving skills in the real world, GT Academy winner Lucas Ordóñez successfully competed in the 24 Hours of Dubai!  With highly experienced teammates like former F1 driver Johnny Herbert, Alex Buncombe, and Rob Barff, the pressure was on Lucas to keep the lap times low and the car on the track.  He managed to do just that, and despite a mechanical setback, helped the Nissan team finish 9th in their class 451 laps and over a distance of 2431km.

The significance of the event was not lost on Kazunori Yamauchi, who attended the race: 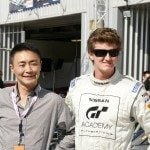 “It is a dream come true for me to see my game develop a real racing driver,” he said. “I have been hoping for it to happen for ten years.  Lucas’s performance has been excellent, but I would expect that from a driver trained using Gran Turismo. I haven’t had much time to watch him drive but he is very calm and never seems to worry. I always believed that someone good at GT could drive as fast as a professional; in fact, I think that they could even go faster.”

Without a doubt, this is a big milestone for motorsports and the Gran Turismo series – someone with ‘virtual’ experience held their own against some of the world’s top drivers, legitimizing ‘sim racing’ as a way to break into a full blown racing career.  We wish the best to both Lucas and Lars, and will be keeping an eye on them here at GTPlanet to see where they go in the future.  For more on the race, check out the team’s official blog and these photos from the event.

Things have been a little quiet on the GT Academy front recently. As GT Sport‘s full esports competition got into action, the gamer-to-racer program seemed to wither somewhat...