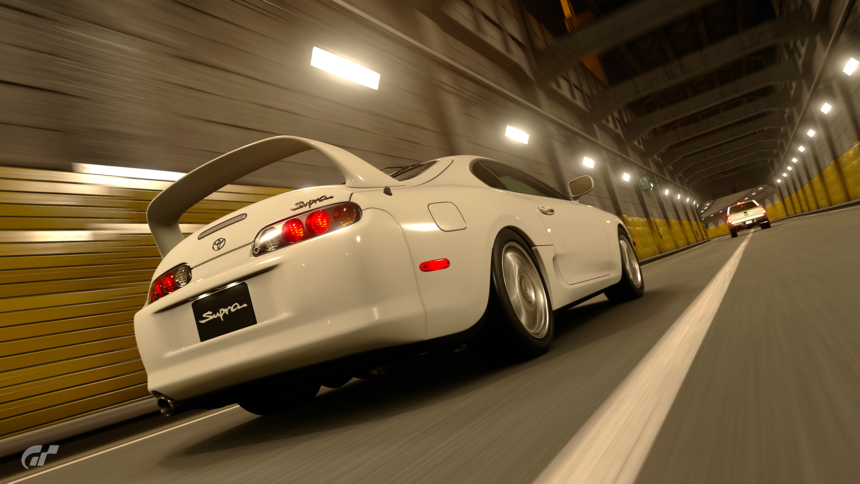 Gran Turismo Sport received its latest update earlier today. The 1.11 version of the game brings 10 new cars to the roster, and we’ve test driven a trio of them here.

You can get the full details of what Polyphony has included in the 1.11 update here. If you’d like more info on the cars specifically, read all about ’em here.

I’ll cut straight to the chase here, with one of the franchise’s most popular cars: the Supra.

Given that the Supra is now the second car to appear in every mainline console GT game (behind last month’s R32 Skyline), I wanted to do something that felt a little old-school. With zero of GT1‘s classic circuits in the game (at least for now), I hit up Tokyo for that Special Stage feel.

A stock Supra is probably more rare than most hypercars these days. So it’s a bit of surprise driving the fourth-gen and getting to know its personality. It’s actually a peach: easy to place on the road, it feels smaller than it actually is. It isn’t rowdy, and that smooth inline-six is certainly more characterful than the 2.0-liter turbo fours that dominate the 300hp range these days.

It’s a cruel irony that one of the most modifiable cars in the scene is now in a game with very little in terms of customization, but as a lesson on what Toyota actually built — not a tuner’s special — it’s an excellent addition.

I couldn’t resist. Before driving the 2000GT, I had to create a livery based on the classic Shelby Racing cars. Sharing a surname with Scooter Patrick, his No. 33 car made the most sense.

I took Japan’s prettiest car to the new East layout of Maggiore. Surrounded by hatchbacks, the 2000GT looks tiny. It is, of course, but even something as pedestrian as a Focus ST looks like a hulking crossover as you come up to pass it.

Feeling true to its roots, the 2000GT does not have a high threshold for grip. It will slip into a lazy slide at low speeds, but the car telegraphs this so clearly that it’s easy to gather back up.

Those 50-year-old tires mean it probably won’t be a threat in any N200 races, but the person driving it will be having fun.

With one of the new Italian cars being locked behind a 20-million credit asking price, I settled on the next-oldest car to explore Monza.

Monza made its debut in GT5 back in 2010, as did the 512BB. For this test drive, I decided to run the chicane-less version, letting the Berlinetta Boxer really stretch its legs.

These new car packs have given a better opportunity to feel GT Sport’s physics engine. At launch, everything bar one Audi car was new metal, and most of it was race-oriented. Driving a ’70s-spec Ferrari feels different: there’s a squidge to the tires that just isn’t there in modern machinery.

That didn’t stop me from sliding it around, though. With 360hp sent out back, the 512 requires care with the throttle. The long-legged gearbox acts as a sort of traction control, but that can only go so far. The trick with the 512BB is to get pointed in early, so that you can unwind the steering lock as quickly as possible to let that V12 put in work.

Stay tuned for more test drives throughout the weekend!

Gran Turismo Sport 607 Sep 21 by Andrew Evans
You’ll get a rare chance to test out your oval racing skills in this week’s GT Sport Daily Races, with a new set of three events. Our headline event comes…

Gran Turismo Sport 607 Sep 14 by Andrew Evans
This week’s GT Sport Daily Races, have an unusual twist with two events where the car is provided to you — and in both cases it’s a pick and mix,…

Gran Turismo Sport 607 Sep 7 by Andrew Evans
There’s no taking things slowly in this week’s GT Sport Daily Races, as all three events put you in race cars. Race A sees a return of the front-wheel drive…