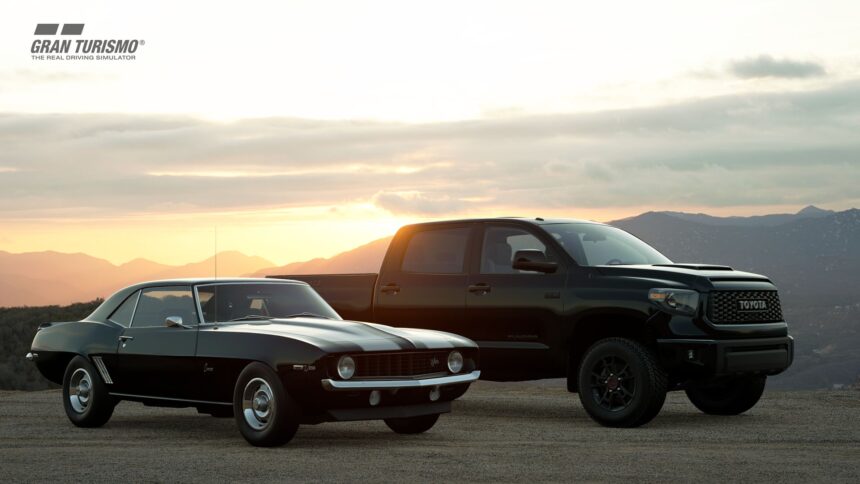 Polyphony Digital has released the official trailer for tomorrow’s 1.40 update, offering a small look at what’s to come.

The major headline here is the addition of six new tracks, around three layouts of a new Sardegna Road Track. This is in roughly the same location as the game’s existing Sardegna Windmills rally course, but is a new, asphalt race circuit.

You’ll have already seen two of the three variants if you tuned in to the GT World Tour events last weekend. The climactic Nations Cup battle used one of the layouts in a race that came down to a last corner decider between the three leading cars.

There’s also five new cars coming to the game. We’ve known about four of them for a little while, but the fifth appeared in the traditional Twitter teaser from studio boss Kazunori Yamauchi only yesterday. They are:

Four of the five are pretty self-explanatory, but the X2019 needs a little introduction. It’s based on the X2014 Standard, an evolution of the original X2010 (first called the X1) concept designed by Red Bull Racing’s Adrian Newey.

The X2014 is a little sensitive to aerodynamic conditions, and in close racing it can become a bit awkward. This inspired PD to create a “Competition” variant, which we’ve seen in World Tour events to date, with different wing profiles to provide better pack battles. There’s also a change from a two-liter V6 turbo engine to a three-liter, naturally aspirated V12.

All five vehicles are available to purchase in the PlayStation Store.

Along with the X2019 Competition, there’ll be a new endurance series event designed for the car in GT League. There’s also seven other new rounds in the existing GT League events in the game, covering all four levels and including Gr.B Rallycross, Lightweight K Car and Gr.1 series.

The official trailer and blog post don’t give any information on any other changes. As yet, there’s no official word on the wet weather conditions we saw used in the World Tour Nations Cup at the weekend either, although the notes suggest “various other features, improvements and fixes” too.

You can see the official trailer below:

As always, don’t forget that you won’t be able to access the online services in GT Sport from the moment the maintenance starts until you’ve installed the update. This includes saving the game, so make sure you do that from the main menu well in advance.

Gran Turismo Sport 607 May 25 by Andrew Evans
It’s another new week, and that means a new set of three GT Sport Daily Races. There’s a little something familiar for players this week, but also something a lot…