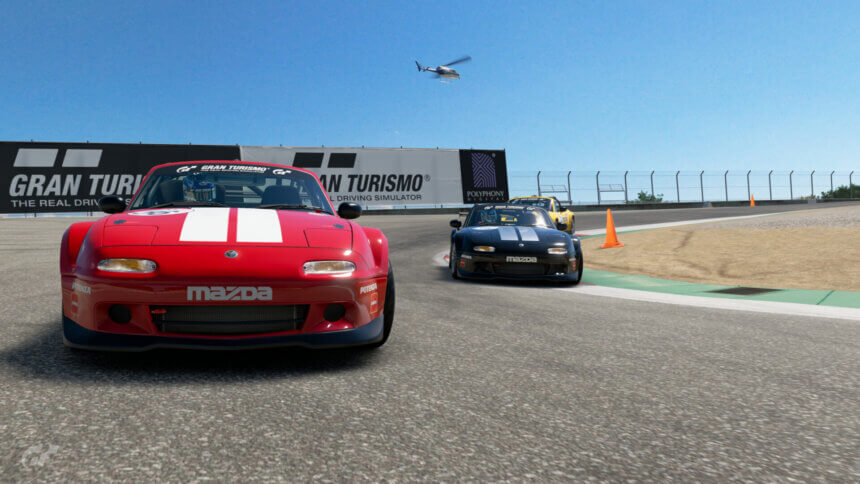 There’s a fresh set of GT Sport Daily Races now available, with players taking race cars — albeit in name alone in one case — to three of the game’s real-world circuits dotted around the globe. As with last week, you’ll be using the two core vehicle classes of GT Sport — Gr.3 and Gr.4 — and enjoying the most-recently added circuit too.

It’s Race A that takes you to the newest patch of road, as you’ll be racing at WeatherTech Raceway Laguna Seca. This fan favorite track came along in December 2019 and — it seems — completed the game’s track roster.

You’ll be driving one of the most fun but also most conflicted cars in the game. The Mazda Roadster Touring Car is a successor to the same vehicle introduced in Gran Turismo 5 — in the Racing Car Pack DLC, no less — and quite clearly a race-prepped version of the famous first-generation Mazda MX-5 (or Eunos Roadster, as Mazda in Japan was experimenting with a whole host of brand names at the time), but is classed as a road car in GT Sport. Nonetheless, it’s an entertaining steer, and it’s yours for four laps of Laguna Seca.

Races B and C bring classic Sport Mode combinations for the week. The former is a Gr.3 sprint race, with players taking their choice of Gr.3 car — the Gran Turismo equivalent of GT3 — for a five-lap blast around the Interlagos circuit. This week’s endurance event will put you in the GT4-equivalent Gr.4 machines for a ten-lap endurance event at Italy’s “temple of speed” at the Monza circuit.

This week there’s no mandatory tires or false start checks to worry about, so there shouldn’t be anything by way of strategy required other than car choice. The Monza event is usually dominated by the Bugatti Veyron Gr.4, a vehicle which isn’t eligible for the game’s flagship FIA Certified Online Championship Manufacturer Series — due to the absence of a Gr.3 car for the brand — so it’ll be a rare opportunity to drag the Bug out of storage.

These three races will run through to Monday, April 12, when another new set of three will replace them. 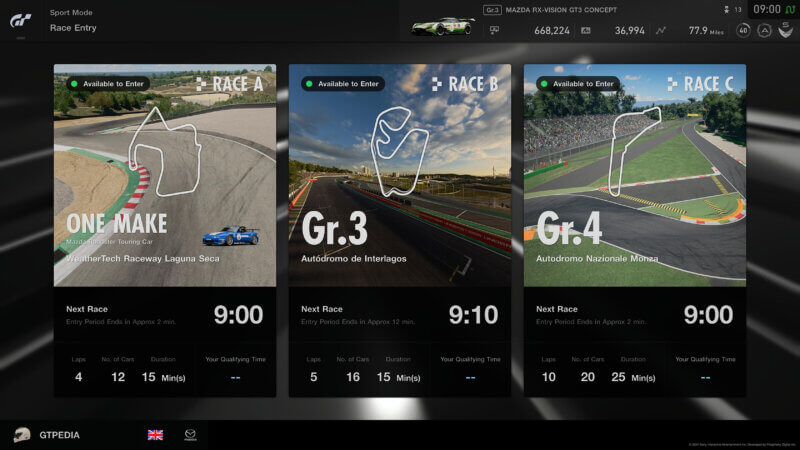 Daily Races
581 Comments Discuss this post in our forums...
Test Your Badge Knowledge With Our Car Logo Quiz

Gran Turismo Sport 107 May 13 by Andrew Evans
If you want to represent your country at an Olympic level for Gran Turismo, your chance is finally here. The official Olympic Virtual Series Time Trial for GT Sport starts…

Gran Turismo Sport 143 May 11 by Andrew Evans
Following on from yesterday’s announcement, the v1.65 update for Gran Turismo Sport is now available. It’s one of the largest updates we’ve seen recently, coming in at over 3GB, but…

Gran Turismo Sport 143 May 10 by Andrew Evans
A new game update for Gran Turismo Sport will arrive this week, according to an in-game announcement mirrored on the official game website. The update will follow a period of…

Gran Turismo Sport 581 May 10 by Andrew Evans
A new set of GT Sport Daily Races gets underway today, with players heading to three of the game’s real-world race tracks dotted around the edge of the Pacific Ocean.…

Gran Turismo Sport 581 May 3 by Andrew Evans
There’s a new set of GT Sport Daily Races starting today, with three new events for players to get to grips with over the next seven days. Each of this…

Esports 13 Apr 30 by Andrew Evans
The second qualifying event for the 2021 International GT League World Series, the Americas Classic, will get underway later today and you can catch it live right here on GTPlanet.…