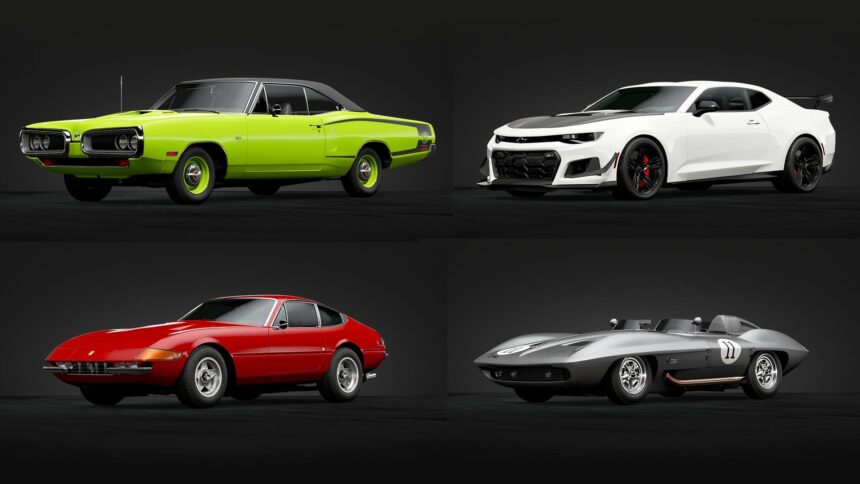 UPDATE: This post has been updated with new information confirming the four cars originally teased for this update.

Given the timings of recent game updates, we’ve been expecting an announcement about the next one — and right on cue, it’s arrived.

Kazunori Yamauchi has, with his traditional silhouette Tweet, confirmed that there’ll be another content update arriving next week. As usual, this provides some very strong hints of the car coming in the update by way of the cover of darkness:

Due to a little slip-up by a guest at Polyphony Digital headquarters, we already know what two of the cars are. Up in the top-left corner you’ll see the Ferrari 365 GTB/4 and opposite it, in the bottom-right, is the Dodge Coronet Super Bee. The latter proved a bit of a mystery at the time — due to the image quality — but it’s exactly what our forums settled on in the end.

The other two have kept their identities secret until now. We have the Chevrolet Corvette StingRay Racer 1959 in the top-right, a car returning from Gran Turismo 6 and possibly another candidate for the money-spinning Nostalgic races in GT League. Bottom-left, and at the other end of the spectrum of automotive history, looks like a present day Chevrolet Camaro, possibly in ZL1 1LE Track Pack form.

We don’t know what other content is on the way in the update, which we assume to be version 1.45, yet. It’s pretty likely that the new wet conditions version of the Tokyo Expressway will make a showing, given that there’s an FIA Online Championship Exhibition Series race on that configuration on October 12, but that’s not a guarantee.

Updates usually bring new — or newly curated — Scapes locations, events in GT League, and a variety of bugfixes and changes. We’ll have to wait for an official announcement to find out what they are. And, for that matter, the date for the update too.

As always, a short period of maintenance will precede the update and you’ll lose all access to the game’s online features until after you have installed it. This includes saving your game, so make sure you save manually with plenty of time to spare.

GT Sport Game Updates
545 Comments Discuss this post in our forums...
Can You Beat the Impossible Gran Turismo Quiz?