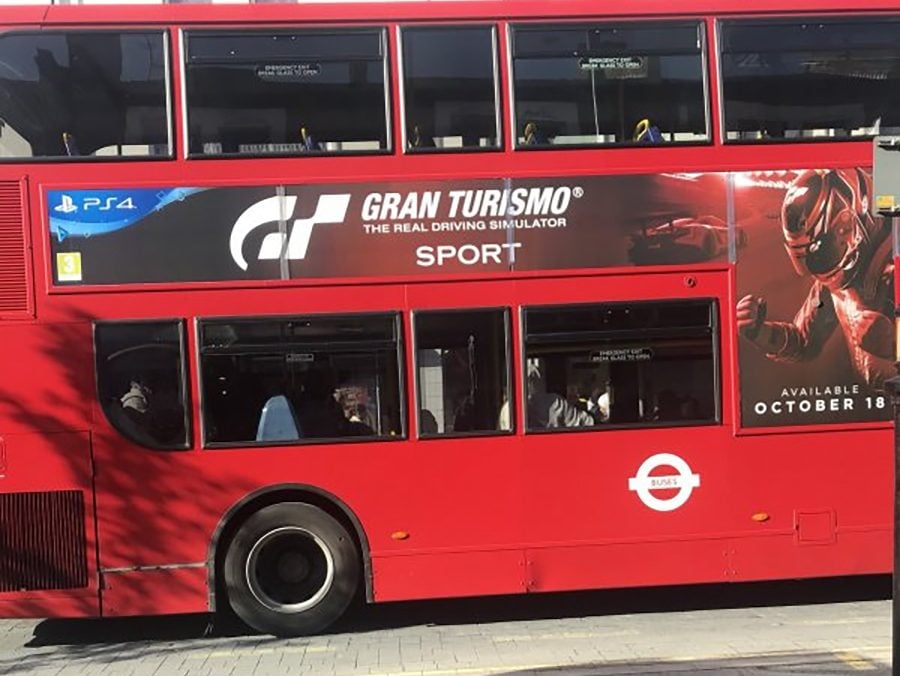 GT Sport is set to land in players’ hands on October 17 and the marketing for the game is starting to push forward. This is especially true in the UK, as the title has started to appear in various mediums.

GTPlanet members have spotted multiple GT Sport ads on TV over the last few days. As it stands, there is no upload of the advert, but it has been reported to have appeared during Channel 4’s Formula 1 broadcast this weekend. Fitting, given the FIA certification the title will possess. It’s encouraging to see GT Sport getting some air time two weeks away from launch.

The series has a history of doing well in Europe and it doesn’t look like Sony wants to lose that stronghold. Things should certainly start picking up the world over next week, as a special four-day demo will arrive.

Alongside the TV ads, Sport has been spotted on the side of buses in England. The photo above shows the ad, carrying the game’s red color scheme, title and release date. As with most marketing materials, we can also see A-spec Andy celebrating some sort of win. Those in large cities in the UK should keep an eye out, you may spot the ad in the wild!

There have also been murmurs of a GT Sport spot appearing before movies in UK cinemas. During Fate and the Furious‘ theatrical run, GT Sport did appear before the film too. It’s unclear if this is the same spot as that seen earlier in year or an entirely new advertisement. Let us know in the comments below if you’ve seen any further marketing or have videos of those above.

Thanks to AKps3 for sharing the above image of the bus advertisement.