This is shaping up to be an action-packed start to the week for fans of Assetto Corsa. What began yesterday with the release of the third and final Porsche Pack and a new update for PS4 owners, continues today with release of the previously-teased Scotland-based fictional track and the Audi Sport Quattro S1 E2 for PC players.

Officially named Highlands, the “ideal” racing circuit was created in partnership with Nvidia and Sparco and is available in a total of four layouts, with each catering to a specific discipline. Built from the ground up, the Scottish locale is available to all players at no additional cost in the following layouts:

Of particular interest is the longer endurance-based layout of the Highlands circuit. Comparable to Circuit de la Sarthe, the ‘Cabhag Straight’ is half the length of the Mulsanne Straight. While the renown 24 hour circuit is unlikely to be featured in Assetto Corsa, this may be the closest players will come until a second installment in the series. 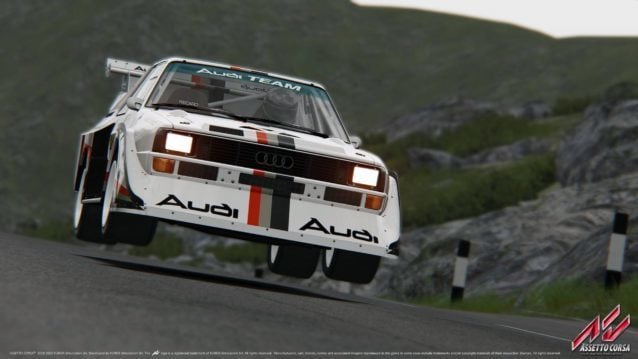 Arriving alongside the Highlands is another free treat in the form of the Audi Sport Quattro S1 E2 Group B rally monster. First seen in the end of the year blog, the S1 makes short work of the track with a howling Inline-5 sending in excess of 500 horses to all four wheels.

The good news isn’t only for PC players, as of today Xbox One will wait no longer and can finally lay their hands on a wealth of new content, as both console update 1.12 and Porsche Pack Vol. 3 are finally available. For everything Xbox One players have to look forward to, again, look no further than yesterday’s update.

The full list of everything affected in the update, including a number of fixes, such as an updated V10 tire model for all cars, and brake fade now being available for all vintage cars can be found below the gallery.