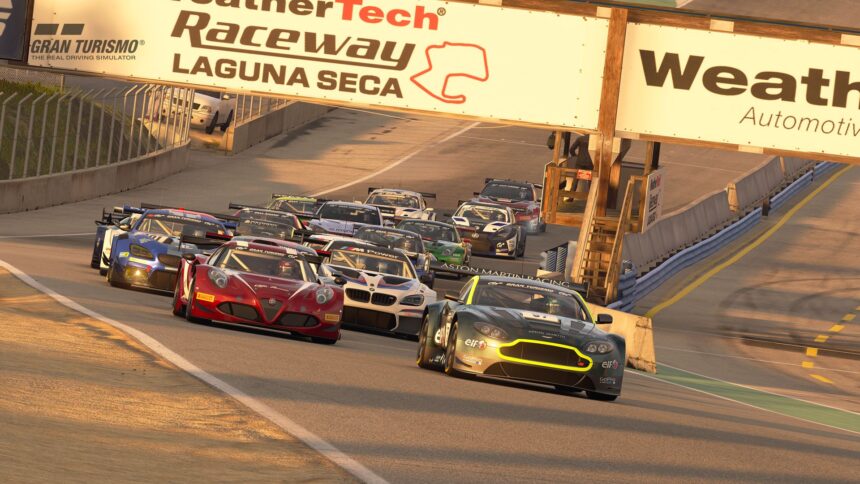 Polyphony Digital has published an official update post confirming all of the content for the update — currently titled 1.53 — which will arrive on December 18. That includes all the cars we already know about, some more details on those that we don’t, and the all-important circuit.

We already knew the identities of four of the cars, but the update post has cast a light on the three mystery cars. Initially it looked like two of the three were police cars — with the Japanese Toyota Crown and the USA’s Dodge Charger. However, despite the bull bars and spotlights on the Dodge, all three are in fact ‘safety cars’.

These are cars used in motorsport to neutralize race conditions. Race officials will tour the circuit in the safety car when the race is not in session, and the race director will call on the car to lead the racing cars round at a controlled speed. You’ll see them at the start of many races, and when there’s a significant incident that requires marshals on the circuit.

GT Sport already features three safety cars, with a BMW M4 and Mercedes-AMG GT available in the Mileage Exchange, and a Nissan GT-R available as a prize car in the game campaign. It’s likely that the three new safety cars — the Charger and Crown, and a Renault Megane — will also appear in Mileage Exchange, although unusually they all have a N-class designation rather than the Gr.X label on the other safety cars. Edit: This has since transpired to be an error, and all three are in fact Gr.X cars.

It seems like forever since Laguna Seca made its GT Sport debut at the World Finals in Monaco, but it’s finally here.

Laguna Seca isn’t the longest track in the world, and its 2.24-mile length only covers 11 corners, but one of them is something else. The Corkscrew is a chicane with a blind crest entry and a 60-foot drop at a peak gradient of 16%, and one of the scariest bits of race track in the world.

The track also holds a special place in Gran Turismo lore, as the first real circuit to appear in the game series back in Gran Turismo 2. Appropriately enough, GT2 celebrated its 20th birthday last week, so the track may be a birthday and Christmas present all rolled into one.

Unusually, the track’s Circuit Experience comes at the same time as the circuit itself. We’ve been used to seeing a circuit in one update and the Circuit Experience in the following update, but here they come together. This will be useful for practice, as we suspect it will appear at the end of the month in the FIA races — and is a shoo-in for a Daily Race soon too.

There’s a special set of Scapes involving the Laguna Seca circuit as well, featuring key areas of the circuit. That includes the main straight and first corner, along with the obvious Corkscrew.

There’ll doubtless be further changes to the game which remain unannounced as yet. Keep an eye on our forums for more information, but for now enjoy the update trailer video below — complete with Mariah Carey-free Christmas jingles:

Gran Turismo Sport 122 Jun 2 by Andrew Evans
It’s not quite two weeks since our last game update to Gran Turismo Sport arrived, but there’s already another one on its way. An announcement on the official GT Sport…

Gran Turismo Sport 2605 Jun 1 by Andrew Evans
The second stage of GT Sport’s radically altered 2020 FIA Online Championship gets underway this week, with another block of ten races in each of the two series. Normally, each…

Gran Turismo Sport 568 Jun 1 by Andrew Evans
The calendar has clicked over to June, and coincidentally it marks the start of another new week. That means there’s a new set of three GT Sport Daily Races to…