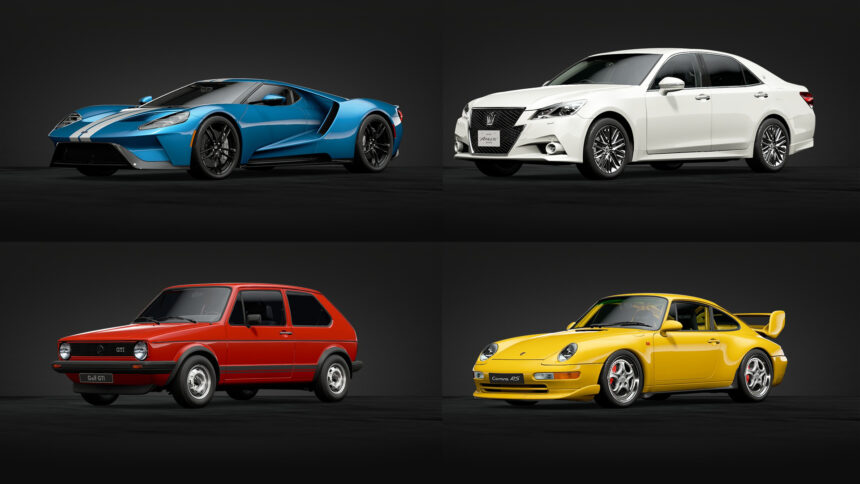 As you’ll be aware, the Christmas update is on its way to GT Sport this week, and we’ve got a sneak preview of some of the content within.

PlayStation Stores around the world are updating to include content that is available across the library of games. That includes cars that you can purchase for GT Sport, even though they are not yet in the game. Thus far, they have revealed four new vehicles.

It’s a fascinating selection, with one returning model from previous GT games, and three new to the series. The vehicle that’ll probably take most of the headlines is the current generation Ford GT, a car that meets numerous fan requests.

Ford created the GT as a homage and successor to the GT line that dates back to the 1960s. The recent film Ford v Ferrari (or Le Mans ’66) covered the genesis of the vehicle, as the GT40, created to hit Ferrari where it hurt in revenge for a failed business deal. Ford brought the name back for a successor in 2005, which you can already find in GT Sport. This third car again exists to beat Ferrari at Le Mans, which Ford achieved again 50 years after the first success.

The road car variant has seen some controversy. Traditionalists were no fans of the 3.5-liter, twin-turbo V6 EcoBoost engine replacing the V8. Ford also adopted an unusual policy of inviting applications to buy the car and selecting potential owners based on influence and visibility. It also bound owners to a minimum ownership term to prevent ‘flipping’ — selling on a desirable car at above list price to circumvent demand — of which some fell foul.

Another significant car on the list is the Porsche 911 (993) Carrera RS Club Sport. This might be the ultimate version of the naturally aspirated, air-cooled 911, as a lightweight, track special. The 3.8-liter flat-six produced 296hp, and thanks to the efforts to reduce weight, powered the 2,800lb car to 60mph in under four seconds. It also came with a full roll cage and very little in the way of creature comforts. Porsche only made 213 examples, so it’s one of the rare cars in the game.

Alongside these is the returning Volkswagen Golf Mk1 GTI — though the GT Sport car is a 1983 model rather than the previous games’ 1976 car. Although not the first true hot hatch, the Golf is probably the car that made the format popular. With 110hp, a top speed of 110mph, and a 0-60mph time just under 10 seconds, the Golf won’t be the performance enthusiast’s choice in GT Sport, but that shouldn’t dull its importance.

Last on the list is the Toyota Crown Athlete G 2013. This will be the 14th generation of Crown, in the sportier — appropriately — Athlete specification. It’s not clear yet which of the real-life engines that power the car will appear in GT Sport, but the sports saloon will likely fit into the slightly crowded N300 category.

The cars confirmed in the PlayStation Store are as follows:

As you may recall from the traditional teaser Tweet over the weekend, the update will contain seven cars. The three missing cars, which we think to be a Dodge Charger police car, a Toyota Crown police car, and a Renault Megane in either police or safety car livery, don’t currently appear in the PS Store. That means that their identities remain unconfirmed for now, but also suggests something further.

There’s only three reasons for a car not to appear in the PS Store. The first is price, with only cars valued at 10,000,000 credits and below appearing in the store. Less common is cars that players cannot purchase at all, such as the recent Supra Gr.4, the Lewis Hamilton Vision GT, and the rare, dirtied Audi R18. Either of these reasons seems unlikely explanations for the three new vehicles.

The final reason is cars only available in the Mileage Exchange. Players can purchase these cars for Mileage Points, and they appear in the player garage as ‘gift’ cars. This seems to be the most likely reason for the cars not appearing in the PS Store, and if so it may prove significant. It would be the first update we’ll have seen to the suite of items available to the Mileage Exchange in over a year, and could suggest a more fundamental change to a feature that has become a little stale recently.

We’re awaiting news of other changes and content — we’re lightly optimistic that the gap in the December FIA schedule will bring a new track, and Laguna Seca is the next on the board. There’ll likely be a teaser video in due course to confirm the content.

This update is due on Wednesday December 18, with a maintenance period scheduled for 0400-0600 UTC beforehand. As usual, you’ll need to manually save well in advance of this to avoid losing game progress.

Gran Turismo Sport 122 Jun 2 by Andrew Evans
It’s not quite two weeks since our last game update to Gran Turismo Sport arrived, but there’s already another one on its way. An announcement on the official GT Sport…

Gran Turismo Sport 2605 Jun 1 by Andrew Evans
The second stage of GT Sport’s radically altered 2020 FIA Online Championship gets underway this week, with another block of ten races in each of the two series. Normally, each…

Gran Turismo Sport 569 Jun 1 by Andrew Evans
The calendar has clicked over to June, and coincidentally it marks the start of another new week. That means there’s a new set of three GT Sport Daily Races to…