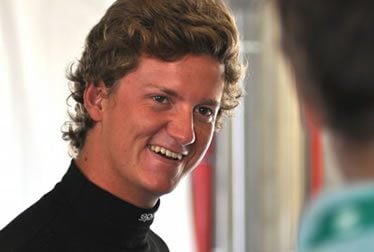 When Lucas Ordonez won the first GT Academy, we all knew he had a lot of expectations riding on his shoulders. He would be given the opportunity to enter a 24 hour endurance race with world-class drivers and sim racers everywhere watched closely as he lived the dream. Since then, we’ve seen him win races and fight for the FIA GT4 driver’s championship around the world. He made it look all too easy, but as this latest interview shows, his accomplishments are the result of a lot of determination and hard work.

If you’re eligible for GT Academy 2010 – which begins in less than 10 days now – you’d be wise to take Lucas’ advice if you want to follow in his footsteps! Keep reading for the full interview…

Q. How did you first get involved with GT Academy?
LO: “I was with some friends and we were looking through a motor sport magazine and I saw an advert from PlayStation and Nissan for GT Academy. I have always been a big motor sport fan and had a little bit of racing experience. I thought if I can train myself to be quick on Gran Turismo then I might have a chance.

“I already had a PS3, but I went straight out to buy a steering wheel and pedals for it as I thought that this would help. I was really determined and I put in lots of hours of practice and developing my skills on the Gran Turismo game. I ended up being the second fastest in Spain and racing in the national finals and I won my place at Silverstone. There I was, driving the Nissan GT-R and the 350 Z at Silverstone…amazing!

Q. How did you find the GT Academy at Silverstone?
LO: “I was very surprised by how tough it was from the fitness angle and by the level of the other competitors. It was really hard work. But the driving was amazing. Driving the 350 Z in a three-way ‘dog fight’ was incredible.”

Q. Did you think you would win?
LO: “After the first couple of days I was down around sixth position and at that time I really thought it was going to be tough. But when we got to do more driving, especially in the last two days, I just really worked hard and my confidence grew. I had some good luck but I also think I handled the pressure well , and I won.”

Q. How did it feel when they announced that you were the winner?
LO: “When they said that Lars and I had won it was an amazing feeling. I couldn’t believe it. But then, almost immediately, Bob Neville [owner of the RJN Motorsports Team] was talking to me about strategy, the car and the races we were going to do. Then I had to do lots of media interviews and then Nissan were talking to me about my contract. So after two minutes, I suddenly already felt like a real, professional racing driver!”

Q. How was the switch from the 350 Z road car to the full race car?
LO: “Our first drive of the GT4 car was at Cadwell Park in the North of England. It is a great track, very narrow but a real up and down circuit and we learned a lot about racing and overtaking there.

“There is a massive difference in terms of driving between the 350 Z GT4 and the road car – particularly in the gearbox and the suspension set up. The GT4 needs to be ‘driven’ a lot more. The gearbox is very stiff and one little mistake with your revs can cause a disaster with the engine. The road car is far more forgiving and you have room for errors, but in the GT4 car you have to concentrate 100% for every second as one mistake and it can be all over.”

Q. You eventually secured your race licence and headed to Dubai for the 24 Hour race. How was that experience?
LO: “I worked so hard in the run up to Dubai, particularly on my fitness. I was absolutely determined to show everyone that I was capable of carrying on racing even after Dubai. I was so focussed on the race. All my friends were asking me what the city was like, but I honestly don’t know as everything was concentrated on driving.

“Doing 250km/h at night on the long straight in the GT4 car was truly amazing. I was really surprised and happy with my lap times because I wasn’t so far away from Johnny Herbert and I think I showed everyone that I was professional.”

Q. What happened next?
LO: “Well that was the prize. I had raced in Dubai. But I did ask Nissan if I could carry on racing somehow. It was a tough three-month wait, but then I got the call and it was a great surprise that I would be racing in the European GT4 Cup with Alex Buncombe.

“When we won our first race in the fifth round at Zolder it was an incredible feeling. I was just thinking about everything that had happened in the last year – from playing the PlayStation to this, and I started crying! The team and Alex were all so happy. It was the best feeling of my life.”

Q. How has your life changed? Did you finish your studies?
LO: “I did pass my MBA in January. It was hard work but I had to study at the same time as preparing for Dubai but I am very pleased that I did it.

“The biggest change in my life has been going from being a student going to university every day to now going to lots of other countries and travelling a lot. I have done many interviews with the media which is very different. At the same time, I still need to stay focussed on my racing and so I train very hard in the gym and I am also busy looking for personal sponsors. This is the real life of the racing driver!”

Q. What next?
LO: “I am going to help out at Silverstone for the GT Academy and then I hope to be racing with Alex again in the European GT4 Cup. We have an unfinished job to complete, but this time in the new 370 Z.”

Q. What would you say to someone who is looking to compete in GT Academy?
LO: “The whole thing is tough. But for me racing cars was my dream, so it was great. Anyone taking part has to be prepared for a real 360 degree change to their life. You have to have total dedication and be prepared to make sacrifices. Lars, who won with me, was a great guy and he was a good driver, but I just don’t think he was focussed enough and he ended up not being ready to race.

“On the other hand, driving on Gran Turismo is great fun. So I would recommend that everybody gives it a go even if it is just to see how quick you are compared to other people. You never know!”

Q. What tips can you offer to people just setting out on the online time trial stage of GT Academy 2010?
LO: “Driving is the same as most other sports. You have to keep practising. I think I played pretty much every day on the online stage of the game. People just kept getting faster so I was always watching the leader board to see what I had to beat.

“Another tip would be to start working on fitness as soon as possible. If you make it to Silverstone it is really important. You have to be confident in yourself that you can give it a go and that it is what you want to do, but you still have to work very hard. The instructors at Silverstone are watching you all the time. Finally, I would say just get on to the GT Academy time trial and play, see how it goes and good luck! It is definitely worth the hard work. But if you don’t make it, at least you will have fun trying!”