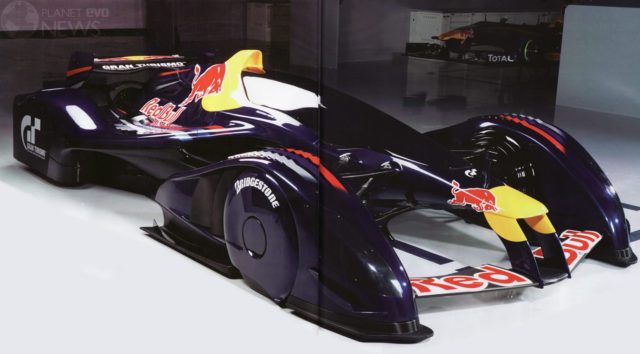 Much like Polyphony Digital’s Citroen GT, it looks like the Red Bull X1 Prototype will also be transitioning from the virtual world into reality – sort of. This is actually just a model, but these pictures from the latest edition of Evo Magazine make it easier to imagine what the real thing could actually look like.

According to Evo, first reports of the car’s gas turbine engine and continuously variable transmission were actually incorrect. Instead, it’s driven by an “F1-derived direct-injection 3-litre twin-turbo V6”, producing 1,483bhp at 15,000rpm and 526lb-ft. at 12,000rpm (that explains the sound heard in the first X1 gameplay video). This elaborate model will be unveiled to the world at the official GT5 Launch Party in Madrid, set to go down in just a few weeks.

Pick up a copy of the magazine at a newsstand near you for more. Thanks to Neal for the tip and the images!