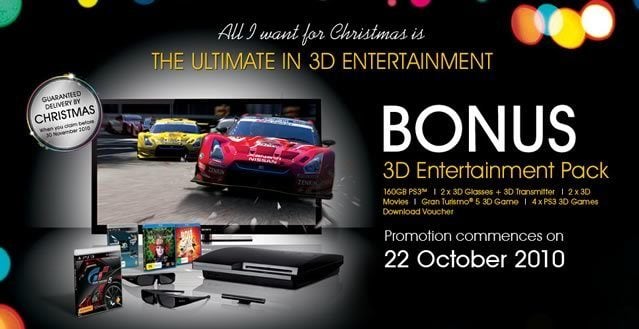 In a knowing nod to those of us anxiously awaiting GT5‘s new release date, Sony Australia has announced a new 3D TV / PlayStation 3 promotional bundle – which includes a copy of Gran Turismo 5 – with “guaranteed delivery by Christmas”.

Here’s how it works: buy a new Bravia 3D TV, be one of the first 21,000 people to submit your proof of purchase to Sony, and you’ll have a new 160GB PS3, two pairs of 3D glasses, two 3D Blu-Ray movies, four PS3 game download vouchers, and one copy of Gran Turismo 5 delivered to your house before December 25th. If you’re an Australian in the market for a 3D television set, it sounds like a pretty good deal to me – get the details here.

Yes, Sony already told us GT5 would be here in time for the “holiday season” when they first announced its delay, but this should be reassuring to those of you who are understandably skeptical. I’d also like to reiterate that some of the retailer dates you’re seeing across the web and your local game store mean nothing – they’re simply placeholders to make customers feel comfortable pre-ordering the game with that particular store. When the real date is announced, it will be news to all of us.

Thanks to Damian for the tip!

3DGT5 Release Date
The original comments for this post are no longer available.
Test Your Badge Knowledge With Our Car Logo Quiz