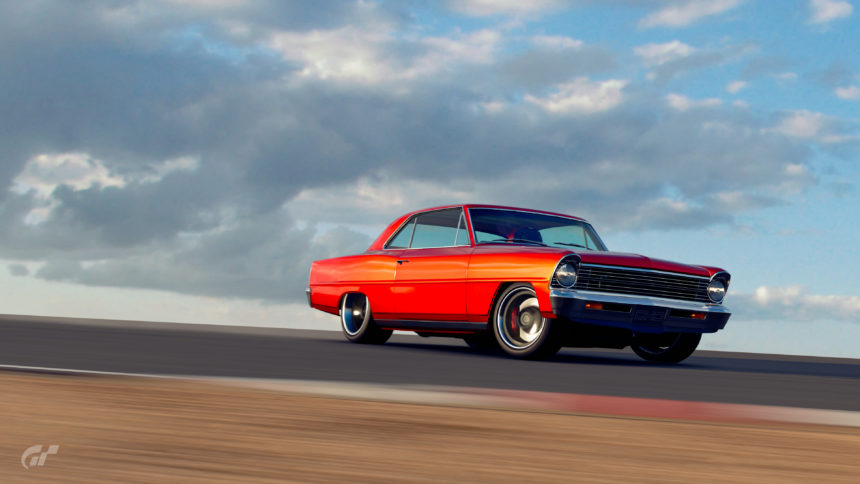 You may have heard a little thing called the 1.10 update landed in GT Sport late last week. Just in time for the franchise’s 20th anniversary — and before some unexpected major down time — it brought a dozen new cars to the game.

We couldn’t resist jumping into the Nova right away. Priced at 300,000 Cr in-game, it doesn’t break the bank, and represents great value in terms of horsepower-per-credit. We’ve treated the 730hp beast to a new coat of bright red paint, courtesy of the Mileage Exchange.

The Nova is as fast as you’d expect in a straight line. That C6 ZR1-sourced engine dominates the experience, with the sort of power delivery that you’d typically associate with a bullet train. It’s when it gets to corners that things get really interesting, though.

The Nova’s natural stance, at least around Willow Springs, was an armful of opposite lock. Third gear, fifth gear — it didn’t matter, applying full throttle swung the tail out. Those wide tires can only contain so much power.

With TCS fully disabled, the Nova is a handful, requiring a lot of concentration and patience. In the N700 class, it’s unlikely to challenge the leaderboards in terms of lap times at anywhere other than the straighter Tokyo layouts. Maybe.

But what the Nova lacks in track attack prowess, it makes up for in grin-inducing fun. A one-make race would be the closest thing GT Sport has yet of a NASCAR series…

Sim racers, especially GT players, are familiar with rally racing. Purpose-built Group B buzzboxes, or the slightly saner Group A cars, are one thing though. Can off-roading in something a little bigger and truck-shaped be just as enjoyable?

It looks like developers think so. Slightly Mad Studios introduced an F-150 in Project CARS 2, and the latest DLC has a Ford Bronco that lives up to the pack’s name. Over in Forza-land, Turn 10 has been adding a bunch of off-roaders in FM7, fuelling rampant speculation of a (long overdue, in our opinion) rallying expansion.

Meanwhile, Gran Turismo’s had trucks since the PS2 days (or PS1 if you count the Subaru Forester). The F-150 is the first to land in GT Sport, and while it seems strange to have it in the same class as the BMW M4 or Aston Martin V8 Vantage, on its own, it’s a hoot.

Strangely, this is the first Raptor, not the more recent, Ecoboost-powered current model. Still, it packs over 400hp from a good old-fashioned 6.2-liter V8. That’s certainly enough to get it around Sardegna and keep things interesting.

But if we’re honest, one of the most fun things about Gran Turismo has always been building up a completely unsuited car for track work. A Raptor race around the ‘Ring? That sounds like a recipe for hilarity!

Stay tuned for more test drives and other developments from GT Sport’s 1.10 update.

Gran Turismo Sport 609 Sep 21 by Andrew Evans
You’ll get a rare chance to test out your oval racing skills in this week’s GT Sport Daily Races, with a new set of three events. Our headline event comes…

Gran Turismo Sport 609 Sep 14 by Andrew Evans
This week’s GT Sport Daily Races, have an unusual twist with two events where the car is provided to you — and in both cases it’s a pick and mix,…

Gran Turismo Sport 609 Sep 7 by Andrew Evans
There’s no taking things slowly in this week’s GT Sport Daily Races, as all three events put you in race cars. Race A sees a return of the front-wheel drive…