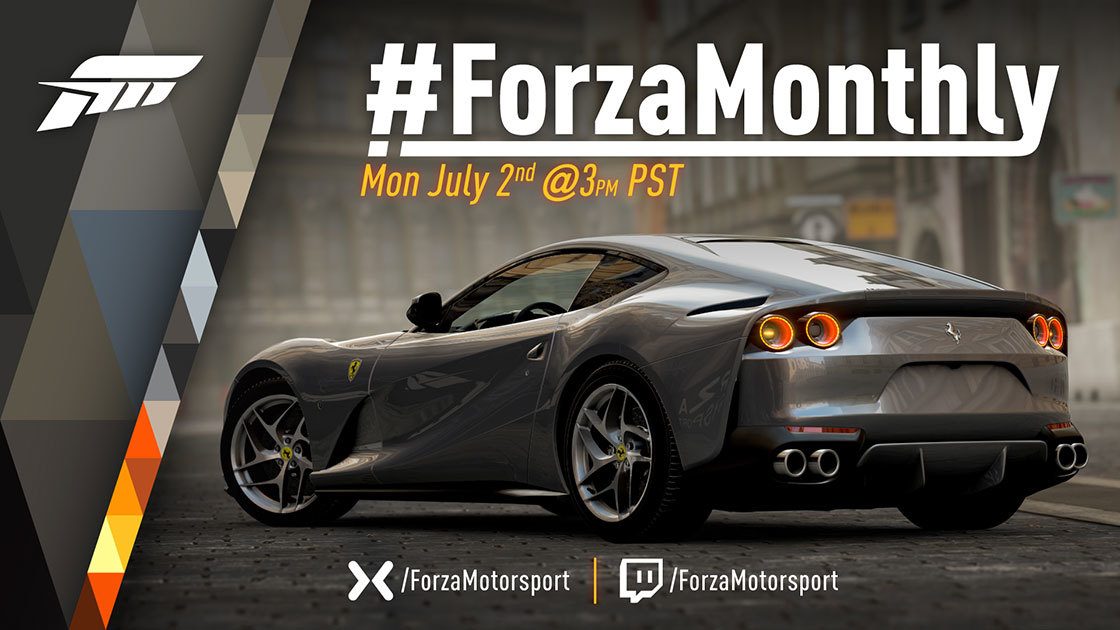 UPDATE: This article originally stated the car pack and game update would land July 3. This was an error, and has been corrected to July 10.

The next car pack is coming to Forza Motorsport 7 very soon. Supercar fans will have lots to look forward to, as Turn 10 has confirmed the current front-engined V12 Ferrari, the 812 Superfast, is coming next month.

Eagle-eyed fans first spotted the car on the official Twitter channel. The image up top advertises the second episode of Forza Monthly — a new live stream talking all things Forza, broadcast directly from the Turn 10 studios in Seattle.

With the mega-GT sitting front and center, it was clear the 812 Superfast was coming to FM7. Community manager Brian Ekberg then confirmed as much in yesterday’s Week In Review. The 789hp coupe will be the first new Ferrari to land in the game since launch.

It’s not the first time this new show has given players a hint of what’s to come, either. Last month’s inaugural episode featured the McLaren 720S in the studio. Ekberg would go on to confirm the Macca’s inclusion in the July update during the show.

Of course, car packs in the Forza world aren’t just two cars. The July pack will feature seven new rides, and the team has released the latest batch of clues to tease the community. It’s safe to say the first two are about the known quantities, but can you figure out the rest?

Clue 4: Deliverance, Army of Darkness, Gremlins, Johnny Mnemonic. What do they all have in common?

Clue 6: It is a relatively compact missile.

Clue 7: “That which we call a rose
By any other word would smell as sweet.”

A popular suggestion for Clue 5 in our community is the Porsche 904. The reasoning? Check out the very exact length of the Washington State Route 904…

The July car pack is the first of two summer packs coming to Forza Motorsport 7. Turn 10 extended the Car Pass to include both, whereas it originally only included the first six.

In addition to the car pack, a new game update will land on July 10. No details on that yet, though we’re hoping for an update on the Race Regulations system.