If you didn’t tune into the ForzaRC Grand Finals yesterday, you missed out on some incredibly quick (and close) racing. A dozen of the fastest Forza drivers all faced off for the chance to call a 2017 Ford Focus RS their own, and it ended in a nail-biting 1-on-1 showdown.

Heavily favoured after he pulled off a clean sweep in the Week 1 qualifiers, TX3 Laige would eventually claim the keys to Ford’s latest hot hatch, but not without a fight. Lightning — one of five eSports+Cars drivers in the event — narrowly snatched pole position from the Frenchman at Watkins Glen. He couldn’t keep his #06 Focus up front though, eventually succumbing to pressure in the final third of the race to finish second. BAM ASIX13 rounded out the podium.

The second race took place at Catalunya. Qualifying saw Laige again lock up second place, with Lightning tumbling to third as his teammate Chemical secured the top spot on the grid. The front-runners swapped a bit of paint in the opening lap, which allowed Chemical and Lightning to put distance between themselves and the rest of the pack. Laige would briefly fall to fifth before working his way back up to a podium finish, as the eSports+Cars duo swapped places, giving Lightning the race win and the points advantage heading into race three.

The Nürburgring hosted the final planned race of the day. Laige would qualify at the top in Germany, with Lightning on second and teammmate Bbbox in third. Chaos broke out at the first turn, with all sorts of nudging shaking the order up. Bbbox emerged in the lead, with Chemical close behind. Lightning suffered a small amount of engine damage during the incident, potentially dashing his chances of victory.

Bbbox ran an impressively quick race, holding off Laige the entire duration to secure a win, propelling him to third place overall and earning $10,000 USD. Laige took second, while a late pass on Chemical netted Lightning third. For those keeping track, this meant a tie for first between Lightning and Laige. 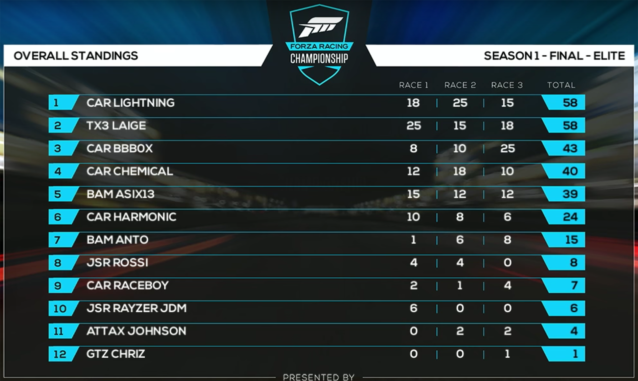 This was obviously not planned for, as the hosts of the event worked quickly to decide exactly how the winner would be determined. Amidst plenty of calls in the Twitch chat for Ford to hand out two cars, it was eventually decided Lightning and Laige would run a quick 4-lap showdown at the same circuit, with qualifying.

We’ve already spoiled the results in the title, so there’s no beating around the bush: Laige clinched it, qualifying ahead and staying there for the race. It was a respectful duel, but with drivers of such high calibre in identical cars, errors are pretty much the only opportunity for passing at a circuit like the ‘Ring GP.

A hearty congrats to all who took part, and especially to Laige for winning a new ride!

Ian Webster (@HeliosT10), Turn 10 Community Manager, was also on hand for the broadcast. Amidst the post-race celebrations, he quietly confirmed that a second season of the Forza Racing Championship will be coming this November. No other details were officially revealed — such as which manufacturer may sponsor the new season, or if it will migrate over to Forza Horizon 3 — so stay tuned to GTPlanet as we learn more.