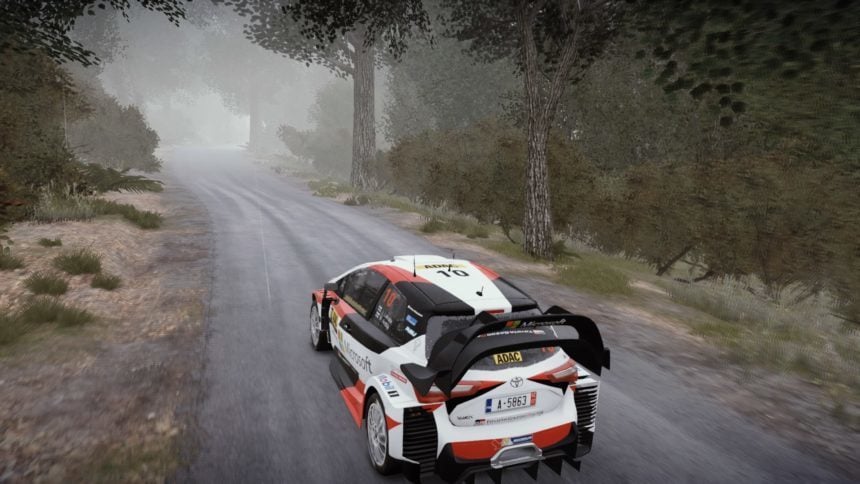 WRC Esports Championship Round 2 Recap: Coasting in The Germany Countryside

After a pretty average showing at Monte Carlo, I was looking forward to the next challenge in the WRC Esports Championship. Dropping the technical madness of the Monte for a more speedy affair, Germany is certainly a fun drive. I was confident of a better placing at least, and I set a goal to finish in the top 200 in light of this.

The first stage in this round is a fast and frantic sprint through the German countryside. If the track did loop, it wouldn’t be far off from being a proper Super Special Stage. Truth be told, I was reasonably confident of a good performance.

Right from the start, you can see exactly what makes the German rally a favorite for those who like speed. The tarmac surface makes the WRC-spec cars very grippy and it takes the power of a handbrake to stop the threat of understeer. This admittedly caught me off-guard a few times so I had to stop the Yaris squirming, dropping precious milliseconds in the process.

Long straights also mean that missing a co-driver’s pace note could prove fatal. Especially with the many roadside obstacles and sharp acute hairpins that aim to catch you off-guard whilst you dash through the countryside.

Disappointingly, this was my poorest performance of the round. Initial placing had me in the top 350, which wasn’t ideal given my aim for the leaderboard. It looked like a stellar performance on the Epic Stage would be a necessity.

The elements hadn’t really played a part in the WRC Esports Championship up until this point. Sure, there was the odd time of day change but nothing to really up the ante. That changes now. A misty rain fell on Mittelmosel, just enough to make you second guess that choice to go full throttle on the many straights. As far as I was concerned, it certainly made things a lot more interesting.

Germany’s Epic Stage is one of my favourites in WRC 7. The combination of speedy countryside and technical forest areas is pure rally. Throw in some crazy inclines and Mittelmosel becomes a challenge for even the most hardened WRC pro.

As far as my drive went, I can’t really complain. The lack of visibility made my single attempt a bit more difficult. I had to rely on the co-driver’s pace notes to guide me through some of the faster sections, of which there were many. Sometimes though, my lax approach got the better of me, making for some necessary turn recoveries. Overall, not the fastest run put together but just enough to help push forward after a disappointing Special Stage.

With the better performance at Mittlemosel, I managed to push up more than one hundred places, finishing 221st. This does mean that I finished 21 places outside of my goal for the round but I’m just happy to be improving each week. Round 3 takes competitors back to a snowy challenge in Sweden, which should prove…interesting.

The final results for round 2 can be viewed right here. Fancy giving the championship a go? Check out our review of WRC 7 to see our full impressions.

Gaming 1 Sep 24 by Michael Leary
The cloud gaming market has just got a little more crowded — and interesting — as Amazon has revealed its long-rumored service at a special hardware event today. It goes…

Gaming 23 Sep 24 by Andrew Evans
Ever since Microsoft revealed it would return to its own custom data storage solution for the Xbox Series X, we’ve been a little curious about what the cost would be…

Gran Turismo Sport 111 Sep 24 by Andrew Evans
Players waking up to GT Sport this morning will find a fresh set of Time Trials starting today, to challenge them over the next two weeks. It’s a mixed surface…

Gran Turismo Sport 509 Sep 21 by Andrew Evans
You’ll get a rare chance to test out your oval racing skills in this week’s GT Sport Daily Races, with a new set of three events. Our headline event comes…

Gaming 31 Sep 19 by Andrew Evans
Sony has apologized for how it handled PlayStation 5 pre-orders, and has promised to rectify the situation with further console availability soon. Despite a comment earlier in the year that…