Earlier this week we celebrated the long-awaited arrival of the 2017 Porsche 911 RSR in Assetto Corsa for PC players. If there were one word to summarize the experience it would have to be “phenomenal”.

With that in mind, the all-new mid-engined 911 wasn’t all that was included in this week’s 1.13 patch: it was accompanied by the Mazda duo of the Le Mans-winning 787B and first-generation MX-5 Miata. It’s worth noting that both vehicles have already been available to PC players in the form of third-party mods for quite some time now, and with both becoming official members of the car roster it was time to take them for a spin once more.

The Mazda 787B is the first up, and as the only machine to hold a victory at Le Mans from a Japanese brand there’s a burden of respect involved; a sense of wanting to drive the Group C prototype to the ragged edge in a bid to prove that it still has “it” around the track. Luckily there are no dire consequences in the virtual world so that’s exactly what we did. 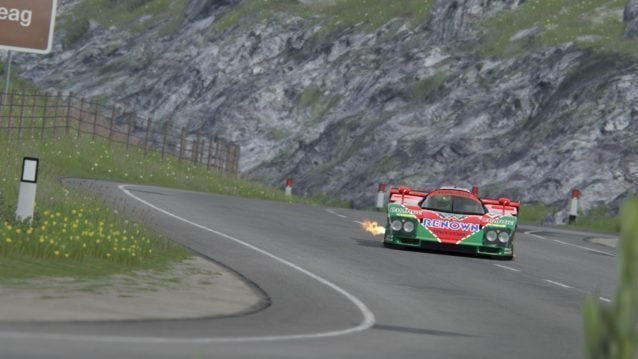 Surprisingly, the rotary howling prototype is more adjusted and calculated than one would come to expect from a 90’s era machine. Make no mistake, in a machine weighing under a ton and being propelled into motion by 700 horsepower, the Le Mans winner commands respect but it does so without making the journey punishing. You’re in control every step of the way, that is until you bite off more than you can chew which by our account is going to be often.

The Group C racer gives you just enough confidence in its abilities to carve a fine line through corners and barrel down any stretch of tarmac, that it never comes across that the machine is in fact egging you on to go faster and be more daring through the corners. Taking it to the site of its victory in 1991 wasn’t on the cards so we’ve opted for a little bit of everything else: the Highlands track introduced back in February for PC players.

A modern prototype by no means, the Mazda doesn’t feel out of place going around the Long ribbon of the fictional Scotland-based circuit, in fact it’s quite the opposite. Allowing for speeds upward of 180 mph the 787B feels right at home, and encourages aggressive driving to get the most from what it has to offer. Therein lies the problem, though: too much aggression often led to kissing the wrong side of the circuit or spinning like a top. There was no middle ground that we could find other than backing off and being a little more reserved.

The lightweight MX-5 Miata is up for a drive next. The stark contrast between it and the Group C machine are blatantly obvious from the get-go. We’d wager that as a result of driving the 787B there’s a lasting effect that drives you (pun intended) into wanting to push the MX-5 beyond its natural ability.

There’s no dancing around the fact that the MX-5 is a blast to drive. With 115 horsepower under the hood courtesy of a 1.6-liter inline-four the Miata NA will get to its destination without much trouble, and if one happens to ‘adventurously’ explore their options while doing so in a sports car weighing just over a ton — who’s going to stop them?

Circuito di Magione was the ideal location for these sports car antics. After going toe-to-toe with the 787B and getting that visceral seat-of-the-pants experience, the only thing we wanted from the first-generation MX-5 was to have a little fun; to see how much the little Mazda could, nay, would tolerate before bucking loose. 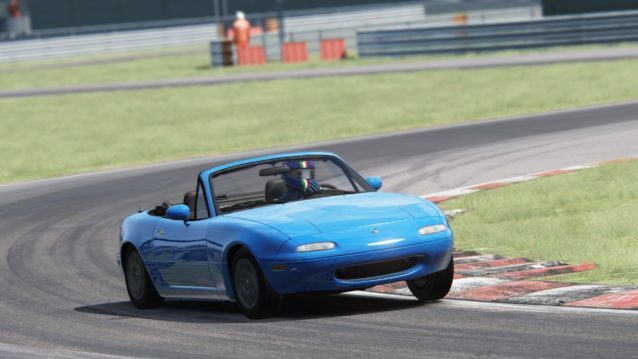 Surprisingly we never came up with an answer to that as the MX-5 tolerated everything that was thrown at it and remained extremely calm, cool, and collected throughout. Driving the Miata in an aggressive fashion is a little more rewarding than one would expect and plays incredibly well to its “Jinbai Ittai” design philosophy. There was never a moment of disconnect, and if something went awry we knew exactly what went wrong and where.

The immediacy of the handling and power delivery lends itself very well to technical outings, leaving no aversions as to why the Miata is as highly reputable among enthusiasts and racers alike. As mentioned, driving the NA hard is more rewarding than it probably should be which only encouraged more of the same albeit in a little more intimacy; a Jack that has mastered its trade.

Assetto Corsa is available on PlayStation 4, Xbox One, and PC. Update 1.13 is currently available to PC players, while no release timetable has been offered for console racers though players can look forward to Private Lobbies touching down in April.