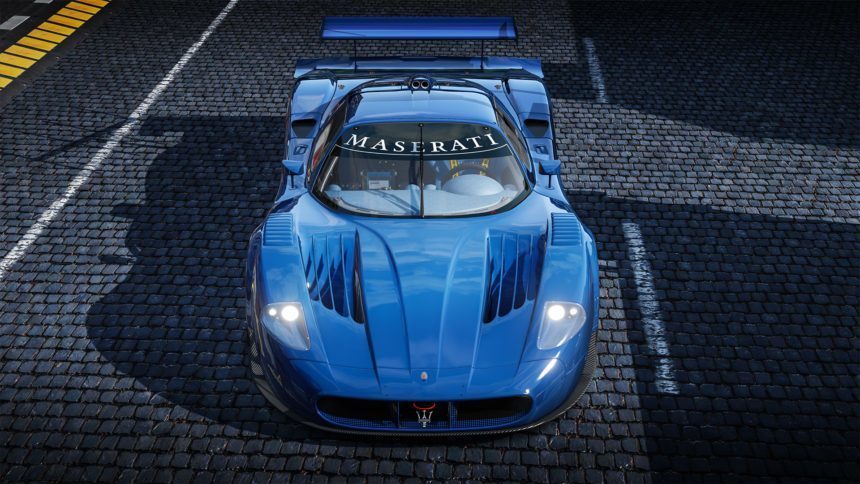 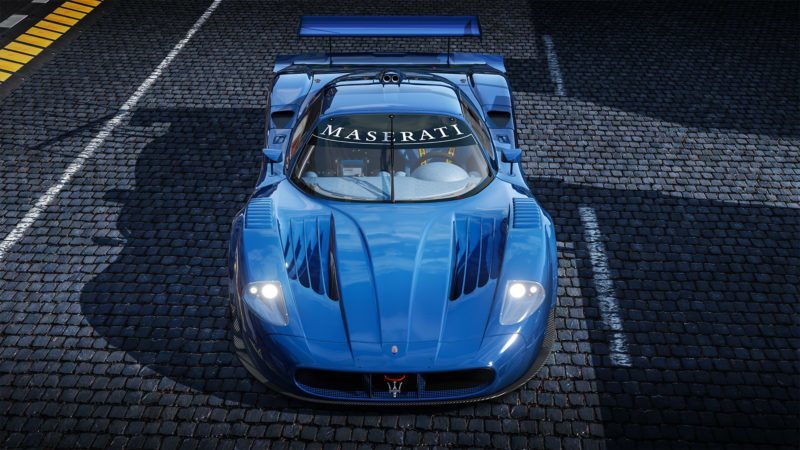 Assetto Corsa players have received a fair amount of goodies this month. Yesterday saw the much-anticipated launch of the 1.14 update on PS4, and today brings the latest car pack DLC to the original PC version.

The Ready To Race Pack introduces ten new cars into the fold. These new machines cover a broad spectrum, ranging from a lightly-fettled Audi TT to two full-blown Le Mans prototypes. Players can grab the pack from Steam now, where it lists for $7.99/£5.99/€7.99.

There’s been one notable change to the pack since it was first teased last week. Unfortunately, the liveries first shown for the Maserati MC12 GT1 will be unavailable in Assetto Corsa, at least officially. Modern liveries require a developer to jump through a lot of legal hoops. Due to this, the car will run without the iconic Vitaphone livery.

While the PC community will undoubtedly crank out a user-generated replacement in no time, the same solution will not be available for console players when the pack eventually lands on the PS4 and XB1.

Alongside the RTR pack, a new update has also gone live for Assetto Corsa. The latest upgrade brings with it numerous detail changes, including the addition of a wind algorithm. For the full list — it’s a big one — head to the bottom of the article.

As we tend to do around these parts, we’re going to take a closer look at the cars included in the Ready To Race Pack. The R8 LMS, TT-RS, and MC12 have already been detailed earlier this week, but we’ve included them here again in case you’ve missed them. 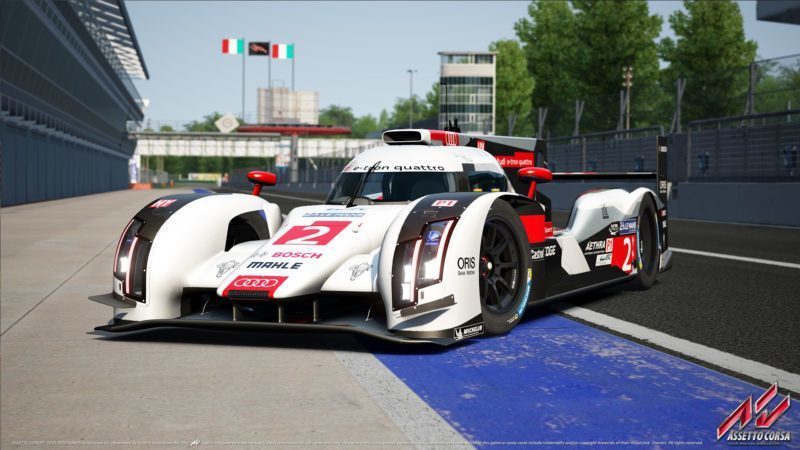 This year marks the first time this millennium where an Audi will not be competing in the top class at Le Mans. How appropriate then, that Assetto Corsa welcomes the final iteration of the R18 to win the historic event. This is the 2014 version of the car, which — to our eyes at least — is a much better-looking racer than the later versions.

The R18 pulled a 1–2 victory over Toyota and Porsche in the 2014 race. A year later, Porsche would return with a revised car and snatch victory from its VW Group sibling. Thanks to a tragic last-minutes failure on Toyota’s part, Porsche repeated the feat. All three cars are now available in Assetto Corsa, as well as another LMP1 challenger…

The second generation of Audi’s production-based racer is one of the most common GT3-class vehicles out there. Over 200 customers have taken delivery of an R8 LMS since the program began, and the latest model can be yours for a little over $400,000. That makes the digital version quite a bargain, then.

The TT Cup car is based off the third-generation TT. Created for a one-make support series, the engine is very slightly more powerful than the road-going TTS. Don’t let the power figure — or the fact that it’s front-drive — fool you: this is not a boulevard cruiser. Scrapping the four-wheel drive means the Cup only has to haul 2,480 lbs around, plus it boasts race tires and bags of aero grip. Not to mention, it’s equipped with a handy push-to-pass system.

Audi built the TT RS for a specific class of the VLN series, and in an unorthodox move, converted the car to front-wheel drive. That’s right: despite looking like an evolution of the wild DTM TTs from a decade previous, this car sends its power to the front. With the five-cylinder engine pumping out 380 hp, this car should be quite the handful.

The 3-Eleven is the first new Lotus model in five years. It’s also the fastest, most powerful, and boasts the best power-to-weight ratio in the company’s road-car history. The car included in Assetto Corsa is even crazier, though: it’s the 460 hp race version.

Following the principles of company founder Colin Chapman, Lotus engineers comprehensively upgraded the Exige V6 by throwing most of it away. Gone are the roof, doors, and windshield — so much was shed that the 3-Eleven tips the scales around 400 lbs less than the Exige. 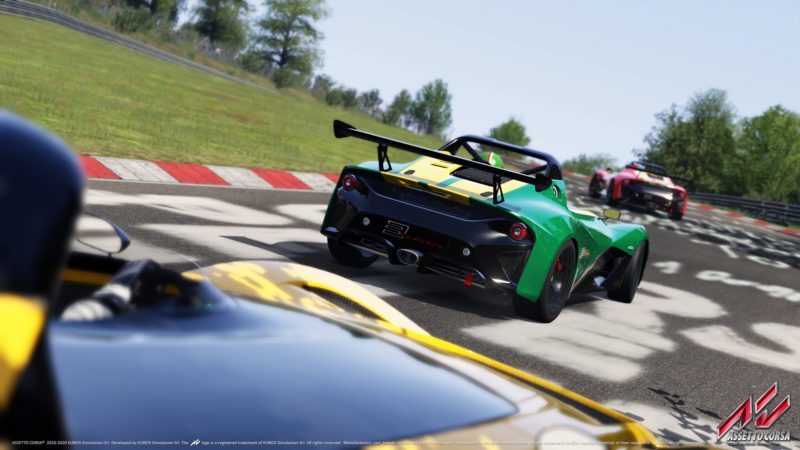 The MC12 should be very familiar to fans of early-naughts sports car racing. This ultra-rare Maserati was crafted from the bones of the Ferrari Enzo. Maserati completed a short run of road-going models to satisfy homologation rules before the car began its on-track domination. In the 94 GT Championship races the MC12 took part in, it won 40.

McLaren continued its road-car expansion two years ago with the introduction of its “entry level” Sports Series. While the 540C is the starting point of the range, the 570S is the highlight. Billed as a more everyday proposition than the 650S (and the recently-unveiled 720S that replaced it), the 570S does battle with the likes of the 911 Turbo and Audi R8. With both of those already a part of Assetto Corsa, we’re betting some players will be putting their own comparison tests on.

The P1 GTR was built to celebrate the 20th anniversary of the legendary F1’s Le Mans win. No longer confined to the limitations of road use, McLaren bumped power up to the magic four-digit mark (1000 ps, or 986 hp) and stripped weight out. Thanks to these changes, the car boasts the production-based lap record at numerous circuits across the globe.

There’s never a bad time for pop-up headlights. The ST185 Celica arrives in Assetto Corsa sporting the instantly recognizable Castrol livery that numerous Toyotas wore in the 90s. For a generation that grew up with Gran Turismo, there are few more evocative designs.

Sure, the ST185 can’t compete with the Group B madness of the Audi Quattro S1 that was recently added to the roster. But we don’t care.

The final car of the pack is another LMP1 challenger. The TS040 was a top-shelf prototype that only could have come from the world’s leading hybrid manufacturer. While the TS040 and its wailing 3.7-liter atmospheric V8 couldn’t defeat Audi at Le Mans in 2014, Toyota played the long game. By the end of the 2014 FIA WEC season, the team handily out-pointed the competition, winning five of the eight rounds. Toyota won both the Drivers’ and Manufacturers’ Championships. 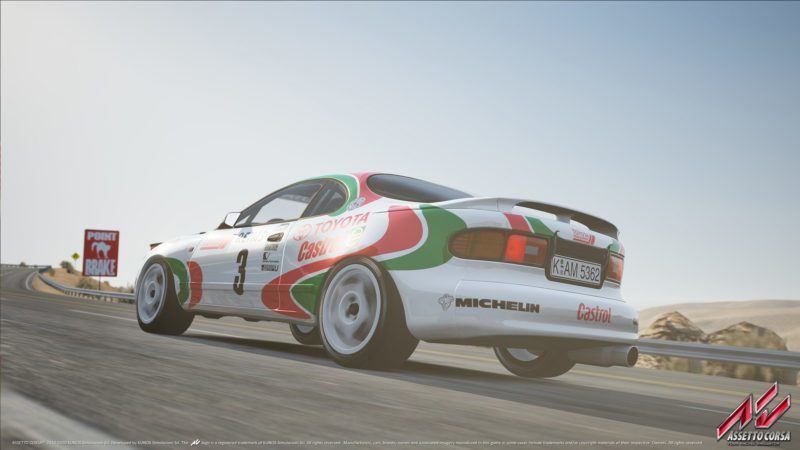