As Assetto Corsa gets closer to a mainstream release, buzz around the game is expected to grow larger as time goes on. A video released on Youtube – by Kunos Simulazioni team member Aristotelis Vasilakos – aims to build around this buzz, showing off just how well AC handles (and looks) compared to reality using the bellissimo Italian combination of an Alfa Romeo 4C on the Modena Circuit.

This clip is an interesting view as it shows a direct comparison between real-life and the game. A lot of comparisons are manufactured to be as similar as possible, but here the intention was literally to show off how close AC and it’s team believe they are to the thrill of driving these cars in real-life, so from a car enthusiast and gaming angle it’s worth a watch.

The video appears to show correlative behaviour for the 4C between AC and reality; it’s squirrel-like nature being projected well as it gets ‘hooned’ around the track in a uploader-proclaimed ‘dirty’ lap, before making a more traditional ‘grip’ lap showing off the brake-power and lateral grip the Italian sports-car is capable of. 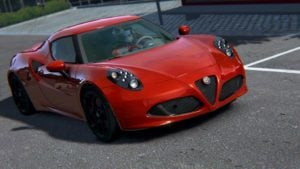 Looking at the clip seems to suggest that AC has done a great job in replicating the general movement of the car: there are some minor differences with how the real-life car reacts to inputs, but on the whole we can see the level of accuracy Kunos have tried to replicate. It is worth noting that we see the real-life car actually appear a bit easier to control compared to it’s virtual counterpart, although this could be down to the virtual tyres having different grip qualities compared to reality.

Unfortunately if you were looking forward to doing this yourself on the console version of Assetto Corsa in April you won’t be able to, as Modena Circuit is a mod track not included in the base title.

Thanks to JohnnyPenso for bringing this to our attention! Photomode image provided by Taz.