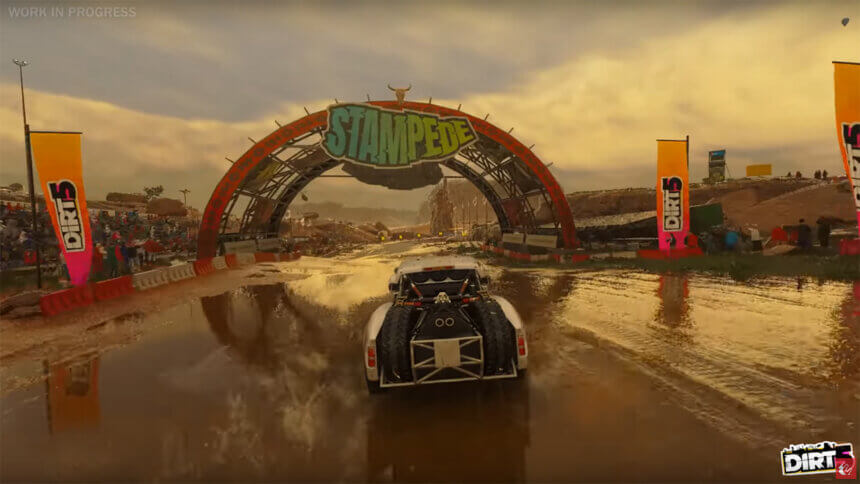 The next entry in the DIRT series, DIRT 5, won’t be with us until October, but Codemasters isn’t shy on releasing information and content. That’s the case again today, as a new clip of the off-road racing game brings yet more new stuff.

Earlier in the summer we heard about DIRT 5‘s career mode, which drafts in renowned voice artists Nolan North and Troy Baker — who play the Drake brothers in the Uncharted series. More recently, Codemasters has released a full list of all the various car classes in D5, and the locations around the world that will play host to its events — along with the events themselves.

Only last week the publisher showed off some official gameplay, featuring a Rock Bouncer tackling the new Path Finder event type, in what we think were the foothills of the Atlas Mountains in Morocco. This week it’s back for more, with a different car, event and location all in one clip.

The latest gameplay sequence features the Stampede event. In this clip, the event seems to take place on an extremely compact circuit created with little regard for elevation changes either in the direction of travel or across it. There’s enormous jumps, steep drops and some pretty severe camber, as the track weaves around the rocks. Although the video shows a time trial event, up to 12 cars can race in a Stampede race at once.

In terms of location, this race is an ocean and a continent away from the previous clip. It’s set in Arizona, specifically in the famous Monument Valley region of the USA’s Colorado Plateau. The desert landscape is marked by hundreds of miles of largely flat terrain, with the occasional sandstone butte rising up to 1,000 feet above the ground below.

Tackling this race is a Jimco Trophy Truck. These machines feature a full spaceframe chassis with a Chevrolet or Ford V8 worth north of 850hp, all wrapped in a fiberglass shell that usually resembles a popular pickup. They fit into the game’s Unlimited class, which is just about the quickest way to get over… anything.

The video also shows off some aspects of DIRT 5‘s dynamic weather system. During the first part of the clip you can see a thunderstorm rolling off into the distance, having soaked the track through to form giant puddles. This dries off nearer the end, becoming more like the Arizona we’re familiar with.

DIRT 5 will launch on October 9, for PlayStation 4, Xbox One, PC, and Google Stadia. It’s also due for a release on the PlayStation 5 and Xbox Series X consoles when they arrive later in the year.