Usually a game update is a time of joy, but today’s update to DIRT Rally 2.0 will be tinged with some sadness for the game’s fans. It’s a relatively small update, but with major implications: it represents the end of the road for DR2.

The game is the 13th in Codemasters’ Colin McRae Rally series, the seventh since being rechristened as “Dirt”, and launched close-on two years ago, in February 2019. DR2 is the more serious sibling of the Dirt game series, providing a sim-like rally experience rather than the more arcade nature of DIRT 4 and last year’s DIRT 5.

Featuring a wide range of real-life rally machines and both point-to-point rally stages and rallycross DR2 is often hailed as one of the finest simulations around, and not just in the sphere of rally sims. It also has its own esports series, and plays host to the official FIA World Rallycross esports series too. Likely helped by a spell as a free PS Plus game back in April, DR2 has a player base of over nine million — impressive numbers for a serious rally sim. 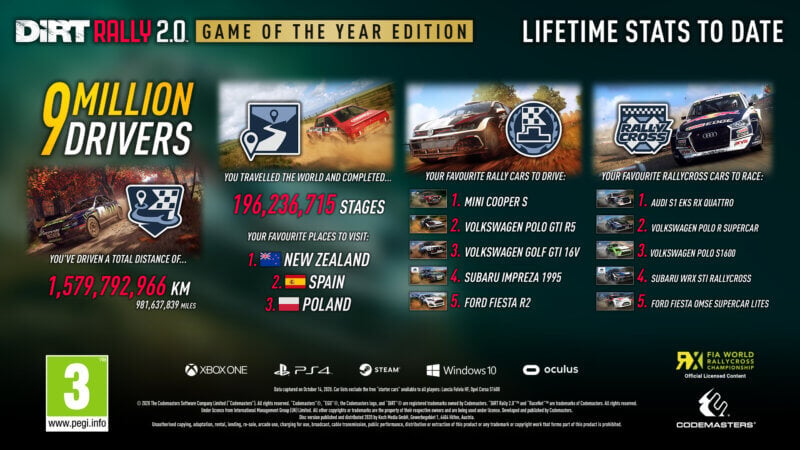 Today’s update is officially known as v1.17, though the PlayStation and Xbox version number will likely be v1.29 when it arrives down the line. It brings minor changes and bugfixes but, more importantly, is “currently the final scheduled update for DiRT Rally 2.0” according to the game’s community manager.

Of course ending update support doesn’t mean Codemasters is shutting DR2 down altogether. Scheduled challenges — daily, weekly, and monthly — will continue, just as they still do with its predecessor, and there’s still plenty left to do in the game through the Clubs section.

That leaves DIRT 5 as the only current title in the Dirt series, and what the future might bring to Dirt is very much up in the air right now. A successor, which we’ll tentatively call Dirt Rally 3, is likely already in the works, but thereafter all bets are off.

Codemasters has already secured the rights to produce official WRC games from 2023, and that might leave Dirt Rally surplus to requirements. There’s also the question of what will happen after EA officially completes its acquisition of Codemasters.

Andrew Evans · Feb 16, 2021· Comments
All eyes may be on the next title in the DIRT series, DIRT 5, but DIRT Rally 2.0 still has a few things to give. Today, Codemasters has announced that the World Series esport competition, running in DR2, will return for 2020.

Andrew Evans · Feb 16, 2021· Comments
DiRT Rally 2.0 players could win a trip to Washington for a rally school lesson from Oliver Solberg, in a new competition that starts today.

Andrew Evans · Feb 16, 2021· Comments
The realities of coronavirus quarantines around the world are starting to set in, but for PlayStation gamers at least there’s a crack of light peeking through the gloom. Off-road racing sim DiRT Rally 2.0 will become available for free to all PS Plus subscribers this month.

Michael Leary · Feb 16, 2021
Codemasters has announced a new version of DiRT Rally 2.0 that veterans and newcomers alike will be able to get their hands on later this month. Dubbed the Game of the Year Edition, this new release includes over 80 cars and 26 locations.

Andrew Evans · Feb 16, 2021· Comments
As teased earlier in the week, there’s something new coming to DiRT Rally 2.0 soon. Codemasters has now revealed all, and in March players can take part in a celebration of all things Colin McRae.

Andrew Evans · Feb 16, 2021· Comments
If you’re still undecided on whether to pick up DiRT Rally 2.0 or not, Codemasters has released something to help you make your mind up.