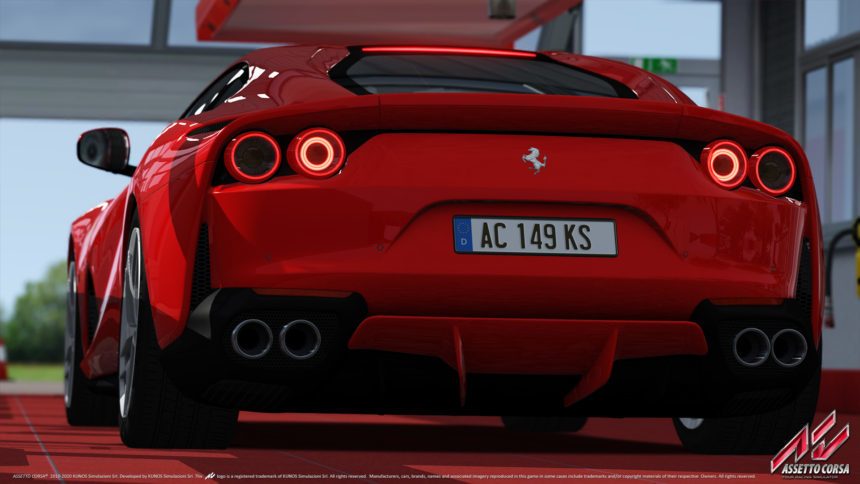 The developer of Assetto Corsa has provided an update on the current status of the console release for it’s latest DLC pack. Kunos Simulazioni’s “70th Anniversary Ferrari Pack” adds a selection of the marque’s finest models and arrived on PCast month. According to a post on the official AC forums, console players may not be too far behind.

The team has submitted the Ferrari-centric DLC to the approval process for both PlayStation 4 and Xbox One. As with all releases on console, the new content must pass through criteria set by each manufacturer. Once Sony or Microsoft are happy with the new update, it can then be deployed to the version in question. On the back of this, 505 Games has also stated that a release date will be set once the results of the submission comes through.

Players will gain access to six new Ferraris in the anniversary pack. Classics like the 250 GTO are also joined by the 2017 812 Superfast. If you’re a big fan of classic Formula 1 cars, the Ferrari F2004 is also here. The full list of included cars are listed below:

In terms of updates, the console versions of Assetto Corsa have just about caught up. Life for Xbox and PS4 players was initially tough as the long-awaited Porsche packs started to arrive on PC during the release window. It would be quite a few months before those on console got to drive cars from the motoring icon, but waiting time between updates have lessened over time. Xbox players had a slightly worse time still, as V1.14 was delayed by months compared to PS4.

Now that the console updates are seemingly being tackled in a unified process, we hope Kunos can keep up with updates across the platforms. The recent announcement of the Bonus DLC pack ensures that AC certainly isn’t done adding content for its dedicated fanbase.

Assetto Corsa DLCFerrari
27 Comments Discuss this post in our forums...
Test Your Badge Knowledge With Our Car Logo Quiz