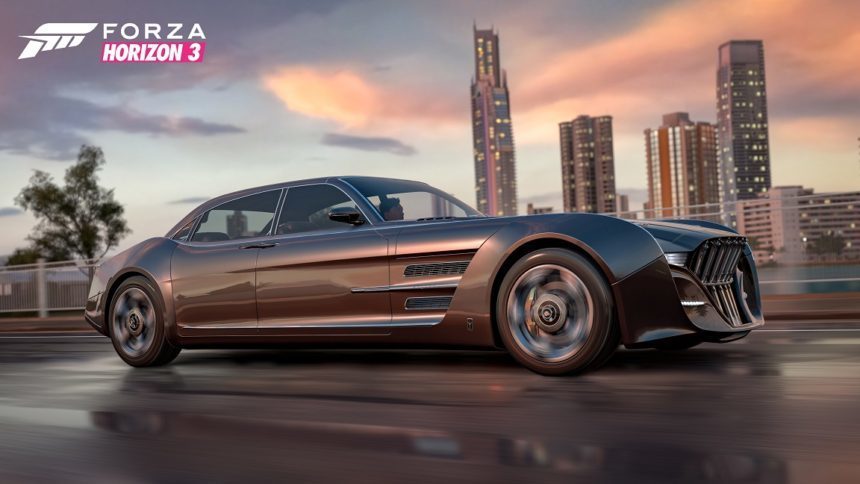 As the fantastical, arcade-minded sibling of the Forza Motorsport series, Forza Horizon has received some pretty weird cars in its history. It started innocently enough, with a couple rides plucked out of The Fast and The Furious. Then Horizon 3 received Halo’s Warthog. More recently we got Hot Wheels cars, and at this point it seems all bets are off. Apparently, anything is possible in the Outback.

Yes, the very same Regalia that Prince Noctis and his friends Gladiolus, Ignis, and Prompto drive all over Eos in Final Fantasy XV, you can now use to venture across Horizon 3’s Australian wilderness. The car is available free to owners of both games, and players should receive a download code on August 1.

In FFXV, the Regalia is actually a character in its own right. Main character Noctis receives the car from his father, King Regis. According to the game’s director, Hajime Tabata, the car symbolizes a son’s relationship with his dad. The Regalia can be customized in a variety of ways, and a recent update gave players the ability to transform it into a monster truck. At one point, you can even fly it as an aircraft — though, sadly, neither is possible in Horizon 3.

Driving the Regalia in FFXV is a mostly underwhelming experience. Most of the time you’re constrained to roads with invisible walls, and the game isn’t shy about taking control and steering for you. Anyone who played FFXV hoping to do some light cruising in between missions was likely disappointed. Fortunately, they’ll get their chance now.

The vehicle’s design was inspired by the Maybach Exelero and Cadillac Ciel. It certainly shows, making the Regalia a suitable choice against Horizon 3’s massive luxury coupes. The car hides a 7.2-liter supercharged V12 under that big hood, pumping out 536 horsepower. That’s not a bad starting point, but we expected a little more grunt. Considering its majestic origins, as well as the intimidating grille and absurd proportions — it’s 21 feet long — that power figure seems only adequate. It can’t even match the new Rolls-Royce!

Now, let’s hope the off-roading Regalia Type-D is next. There can’t be a more luxurious way to scale Blizzard Mountain.

Forza Horizon 3 DLC
63 Comments Discuss this post in our forums...
Test Your Badge Knowledge With Our Car Logo Quiz