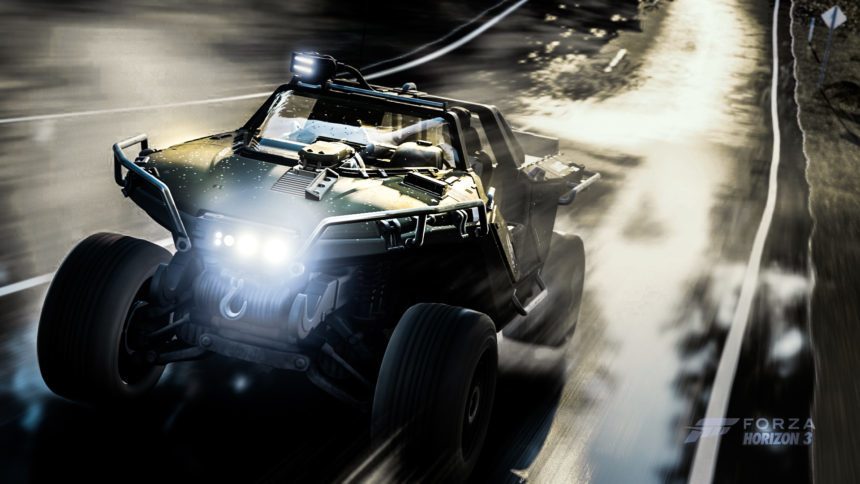 It has been five years since Microsoft’s Turn 10 Studios and previous Halo developer Bungie teamed up to bring the M12 Force Application Vehicle to Forza Motorsport 4. Now, the battletested four-wheeler from the future returns to the home front for a more racy cameo in Forza Horizon 3.

Although this is not the first time the fictional vehicle — assigned to the equally illusory United Nations Space Command — has appeared in the Forza franchise, it marks the first time that Forza gamers will be able to drive the Warthog outside of the Halo universe. Back in 2011, Master Chief’s assault vehicle was merely a prop for Forza Motorsport’s newly debuted Autovista mode, with rather comedic narration by former Top Gear presenter Jeremy Clarkson.

Those who had previously embarked on journeys in Halo 5: Guardians or Halo: The Master Chief Collection gained early access to the turret-less M12S in Playground Games’ open-world racer. For all others, the Warthog becomes accessible starting this week with Round 4 of Forzathon.

After opportunities to bank the highly sought-after S14 and, most recently, an Xbox Racing-liveried Falcon FG, the AMG Transport Dynamics M12S Warthog can find a spot next to the Audis and Toyotas of your garage with the completion of a relatively simple in-game task. Then, stock up on three Halo-themed horns through more online gameplay:

Unlike the three previous rounds of Forzathon, no vehicle discounts are being offered.

If a cross-title promotion in Forza sounds familiar, you don’t have to look far to find Turn 10 Studios’ partnership with Bethesda Game Studios. With the release of Forza Motorsport 6, the two developers worked together to bring the Chryslus Rocket 69 to the virtual world of sim racing at a time when Fallout 4 was fresh on the scene.

Round 4 of Forzathon is scheduled to kick off October 28 (time zone permitting), and close on October 30. Check the in-game ‘Social’ tab for a live countdown to the event’s start. For tips and tricks from the GTPlanet community, visit the Forzathon discussion thread in our forum.

ForzathonHaloM12S Warthog
The original comments for this post are no longer available.
Test Your Badge Knowledge With Our Car Logo Quiz