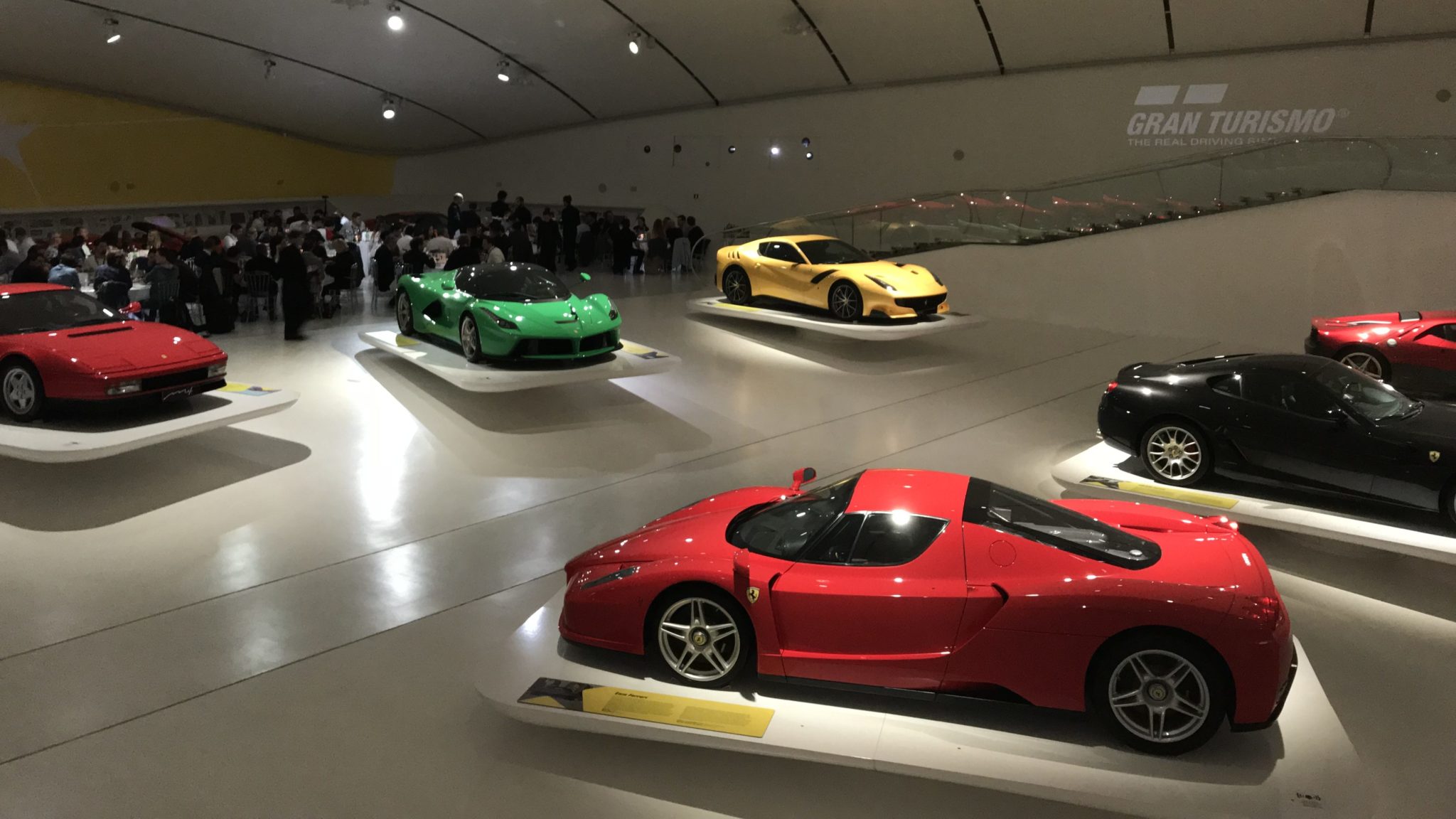 Gran Turismo games come with big launch parties. For Gran Turismo 5, Polyphony Digital hosted a swanky event in the City Hall of Madrid. The Gran Turismo 6 event was even larger, consuming the entire city of Ronda, Spain and the nearby Ascari Race Resort.

For Gran Turismo Sport, we were headed to Italy. Held in Modena — home to the country’s most revered automotive brands — it was an incredible two days of parties, exotic cars, and virtual racing.

As the only media representative from the United States, I arrived a day early. Outside the hotel, workers replaced the hotel sign with the Gran Turismo logo, indicating I was in the right place. Until then, the location of the event had been a well-kept secret. I smiled as I watched a few teenage boys recognize the logo and try to figure out what was going on.

I had the first night in Modena to myself, and used the time to explore the town. As I walked down the picturesque Via Emilia, a coffee shop played “downtempo” chill-out music for the small gathering of patrons outside. Passing cars rolled over the cobblestone streets, driving straight out of a Photo Scape and into the real world. It was a quintessentially “Gran Turismo” atmosphere, and a beautiful way to start the trip. 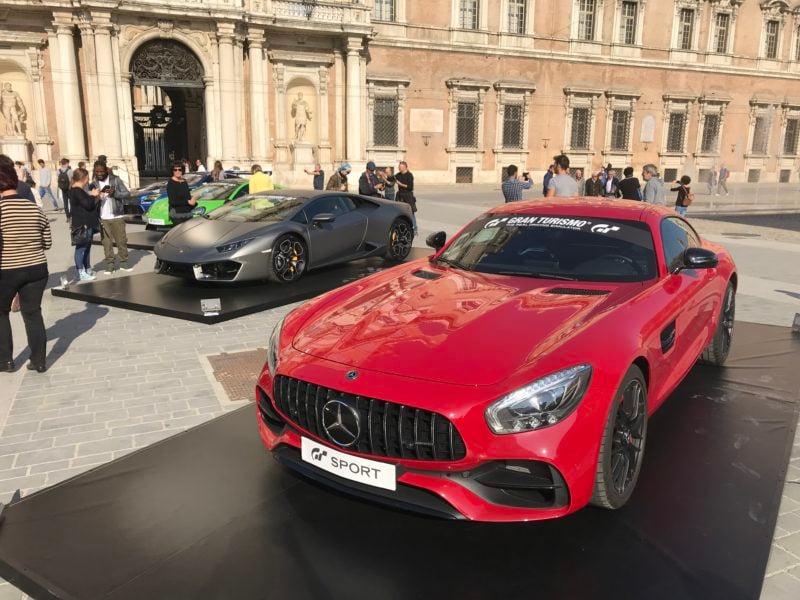 Upon checking in the next day, we enjoyed lunch at the excellent Caffè Concerto. Full of pasta and tiramisu, it was a short walk over to the GT Sport display in the heart of the city. Exotic cars lined the Piazza Roma in front of Modena’s historic Military Academy, which stood in sharp contrast to the futuristic “Gran Turismo” domes built for the event. The domes housed a private media lounge and GT Sport racing pods, offering our first look at the latest build of the game.

It was here where I finally met the most notorious oracle in the world of Gran Turismo: “Amar212”. A passionate fan of the series, Amar runs GTSurgeons, the largest Croatian GT fan site. He has a storied history in the community, having driven the series’ rumor mill for almost 15 years. If you’re reading, Amar, it was an honor and a pleasure to finally meet you! 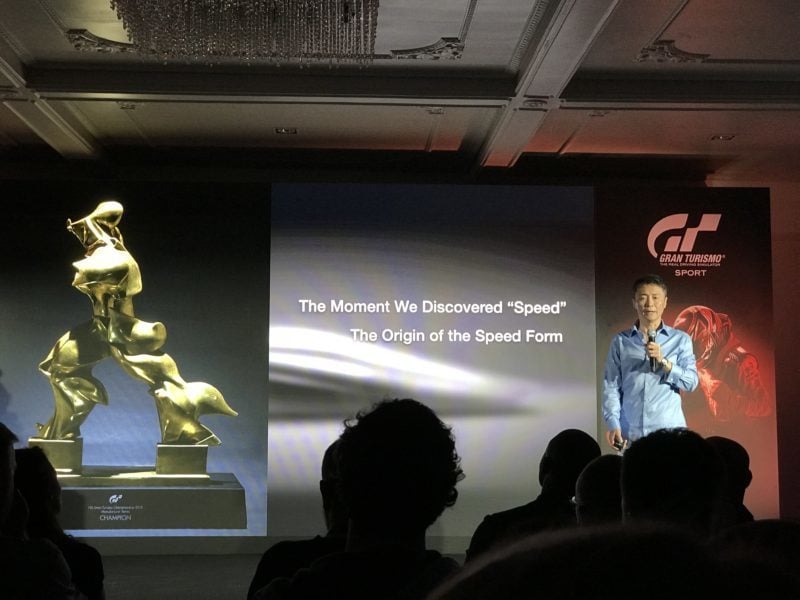 Before long, it was time to return to the hotel for drinks, canapés, and Kazunori Yamauchi’s opening presentation. Kazunori-san offered an overview of GT Sport, but his major revelation was the starting date of the FIA Online Championship and the championship’s new trophy, modeled after Umberto Boccioni’s “Unique Forms of Continuity in Space”.

With the presentation complete, it was time for dinner at one of the most spectacular automotive venues in Europe: the Enzo Ferrari Museum. We enjoyed wine and lasagna while sitting amongst the likes of a Ferrari F40, Eric Clapton’s bespoke Ferrari SP-12 EC, Jay Kay’s mint-green LaFerrari, and dozens more priceless models from the Italian marque.

At dinner, it was announced that Kazunori Yamauchi would be receiving an honorary doctorate degree from the University of Modena and Reggio Emilia on the following Tuesday. He was joined by over 50 attending Polyphony Digital employees as they posed for a picture with a giant Gran Turismo logo projected overhead.

Things started early the next morning, as we headed to the nearby Autodromo di Modena. A howling Lamborghini Huracán Spyder and Mercedes AMG GT-C Roadster welcomed us to the track, along with a spread of pastries, coffee, and GT Academy instructors ready to guide us through the day.

My group started off with a Porsche 911 Carrera GTS and a BMW M2 to drive on track. As curious as I was about the M2, I opted for the 911; it was a very good choice. The car was incredible: responsive, lots of power, and more than enough grip to make it through the corners. It was a treat to drive.

The real treat was next, though, as I learned I would be getting into the passenger seat of the Walkenhorst BMW M6 GT3. Yes, that’s the same car featured in GT Sport, and the same car Kazunori Yamauchi himself drove last year in the Nurburgring 24 Hours. 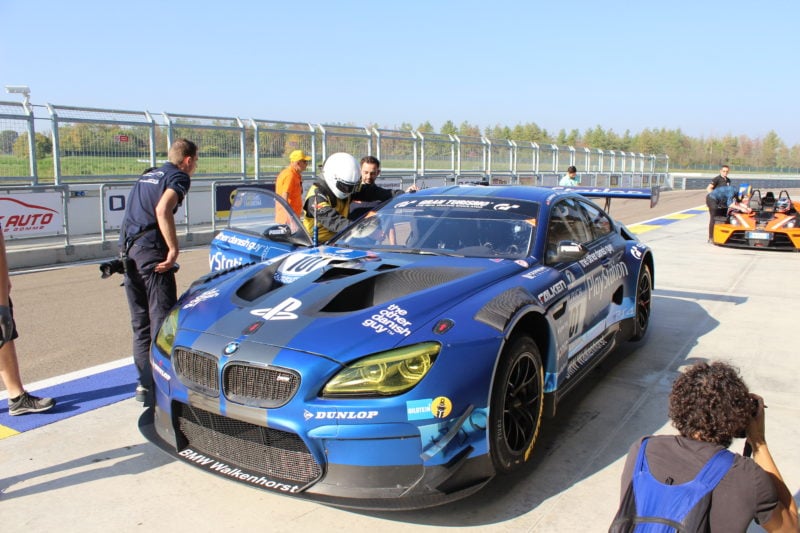 The experience was nothing short of exhilarating. Driven by team director Henry Walkenhorst himself, the M6 was violent and visceral. The other cars on track — the 911, the M2, a KTM X-Bow, and a Lamborghini Aventador — were nothing to laugh at, but it was comical how effortlessly we could overtake them.

My mouth dry from that shot of adrenaline, I was happy to take a break in the pit garage next door with Gran Turismo Sport. I was still a bit wired, though, and it helped me set the fastest lap time of the day in the challenge.

We moved on to the autocross course, with the chance to compete for prizes behind the wheel of either the AMG GT-C or Huracán Spyder we had seen earlier. The instructors placed me in the AMG; I set a time within one second of the leader, but it wasn’t quite enough!

Thanks to Mike Channell for help with the photos!

Back at the hotel, we had a few hours to decompress before the grand finale: an “esports”-style live race. I won all the qualifying rounds earlier in the day, undefeated heading in to the final race. There was a lot to compete for: the winner received over $2,500 in prizes, including a new TAG Heuer Connected Modular 45 watch, a PlayStation 4 Pro, and a Thrustmaster T-GT wheel.

The race was a quick, three-lap sprint around Suzuka East in Gr. 4 cars, but I struggled to get a clean qualifying lap. Starting third on the grid, I knew I had to stay out of any carnage and make up as many positions as possible. Through the first corner, I was in second, and fought with the leader throughout the opening lap.

I could see I was faster, but I wasn’t sure if I would have enough time to get a clean pass on this short version of Suzuka. To my surprise, he made a mistake early in the second lap, running wide and losing momentum as I took the lead.

After his mistake, my goal was to stay calm and not make one of my own. This was easier said than done: the crowd — who had been taking full advantage of the open bar — screamed and cheered as Tom’s commentary worked them into a frenzy.

Somehow, I maintained focus across the finish line, securing victory and a new TAG Heuer, PS4 Pro, and Thrustmaster wheel! Photographs and congratulations followed; it was special to bring home the win in front of so many friends and Polyphony Digital team members. We celebrated late into the night, with more racing, food, drinks, music, and dancing until the hotel staff finally kicked us out of the venue. 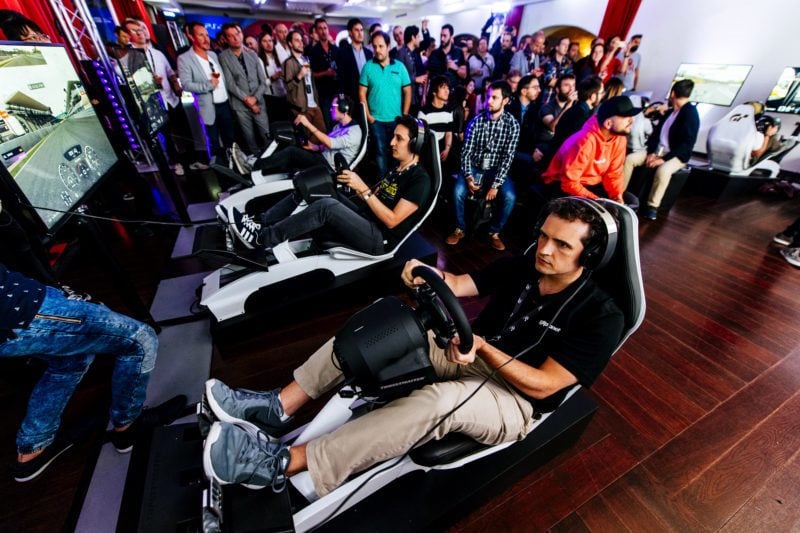 It was a fitting end to yet another spectacular Gran Turismo launch party, and a rousing endorsement of GT Sport as a competitive platform. With good competition and a lively crowd, virtual racing can be very exciting. If the FIA Online Competition is anything like this event, we’re all in for some great racing next year.

Thank you to the staff from PlayStation UK, Jardine International, TAG Heuer, Thrustmaster, and Polyphony Digital who helped make it all possible. It was a pleasure meeting and spending time with you all!