Live streaming is now complete. Thanks to all who watched!
Click here to view the archived streams and competition results.

After eight long weeks of online time trials held in the GT Academy 2012 mini-game, the top 33 Gran Turismo players in the United States have earned their place in the National Finals.

Only 16 of these drivers will survive in the competition, advancing to the GT Academy Boot Camp in Silverstone, where just one will be chosen as the 2012 U.S. champion and become a professional racing driver for Nissan.

For the first time of any GT Academy final, the entire event will be broadcast live, with full commentary and coverage of all the head-to-head races, available via IGN Pro League and here on GTPlanet.

If you’re in San Diego, you can also attend the event for free as an audience member; just head to Jolt’n Joe’s during the event hours.

Here’s an overview of the event format and rules: 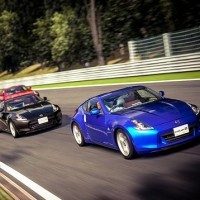 The 32 remaining contestants will be divided via a random drawing into eight groups of four contestants each. Contestants in each group will compete in three online race events in each round. Each contestant will earn points based on finishing positions in each event in his or her group. Points will be awarded as follows:

National Finals’ Rounds will be as follows:

Race difficulty gradually increases per round of the National Finals, with later races being in more difficult cars and tracks. Event organizers will select the tracks, number of laps, cars, and car settings prior to start of each round.

Sponsors may have one or more race judges on site to monitor contestants during competition. The race judges (whose judgment on all race matters is final) may monitor races and may issue warnings for behaviors that violate standard rules for professional racing. Examples include:

Each contestant is allowed two warnings. A contestant receiving three warnings will be disqualified from the race. Certain flagrant behaviors may also result in immediate disqualification.

Hit the play button at the top of the page to begin the stream, or stop by our GT Academy forum to join the discussion with the rest of our community. Good luck to all of the competitors!