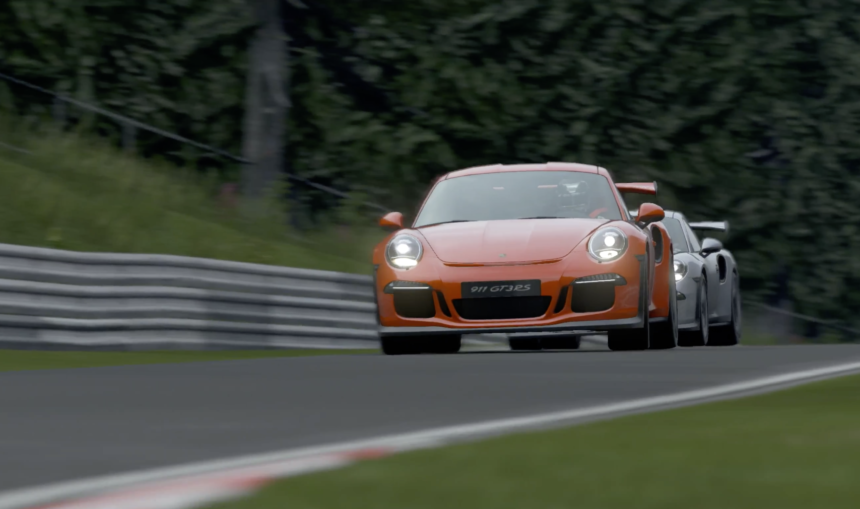 Tokyo Game Show may have wrapped up but gameplay continues to filter through from the event. GT Sport had a good presence at the show that included a live broadcast race and a playable demo on the show floor for attendees to try out. A further stream of the game has given us a look at the Porsche 911 GT3 RS in action.

The gameplay appears at the tail end of the 15 minute video above. We’ve cropped the video to start at that time so you can see the Porsche being taken for a spin. The driving quality is admittedly poor but this is our first proper direct capture footage of the GT3 RS.

The aforementioned poor driving appears to have been a result of an option GT Sport provides. Players can drive GT Sport with three main control systems; Analog stick control, D-Pad and — questionably — motion controls. The driver goes with D-Pad controls, which we imagine isn’t up to the task of driving a 500hp supercar.

As a result, we don’t get a very good look at what the car is capable of but we do get to see the dust particles when hitting the dunes on Willow Springs. A lot. If you’ve been keeping up with recent GT Sport gameplay videos you may be sick of Willow but still, it’s worth watching for the Porsche alone. GT Sport launches 17 October.

Thanks to gtone339 for tipping us off for the above video!

Gran Turismo Sport 243 Oct 22 by Andrew Evans
The latest set of GT Sport Time Trials is now available, running for the next two weeks. It’s a bit of a change of pace this week, and a very…

Gran Turismo Sport 379 Oct 19 by Andrew Evans
After a few complicated races in recent weeks, this week’s new set of GT Sport Daily Races is a return to simpler times. It’s a case of picking how fast…

Gran Turismo Sport 379 Oct 12 by Andrew Evans
A new set of GT Sport Daily Races starts today, with something of a focus on cars with the engine in the middle. There’s three races as usual, with two…

Gran Turismo Sport 243 Oct 8 by Andrew Evans
There’s another set of new Time Trials starting in GT Sport, and taking us through the next two weeks. After some recent outings on dirt roads, it’s a return to…