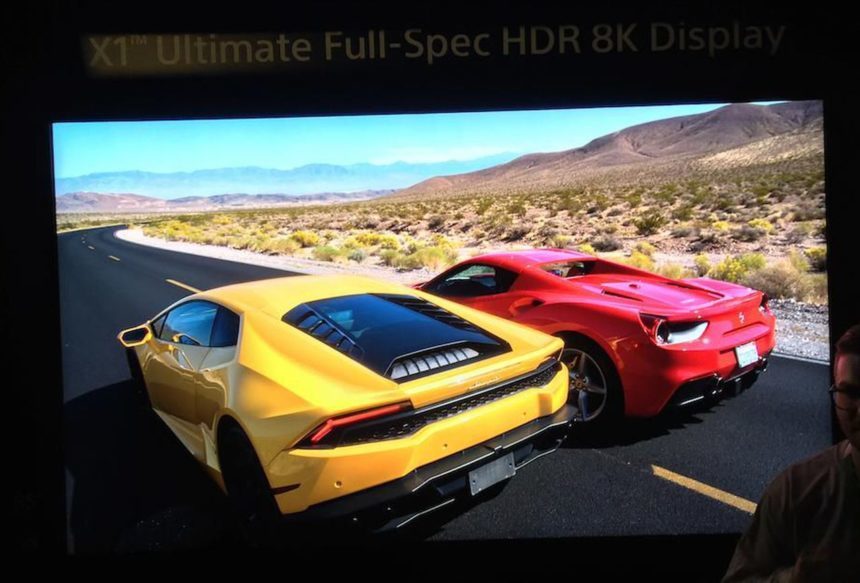 Tech enthusiasts from all over the world have descended upon Las Vegas for the annual Consumer Electronics Show. The 2018 iteration is in full swing and PlayStation’s head company Sony is in the thick of the action.

Alongside future consumer goods, many companies use this as a proving ground to show off prototype technology and this year Sony brought something very big.

Hosted in the company’s booth at the event is a massive 85-inch TV. This isn’t just any television set though, as the X1 Ultimate Prototype outputs a mammoth 8K resolution with beautiful HDR to boot. Not bad at all.

Unsurprisingly, those on the show floor are commenting that the display is staggering. For us at GTPlanet though, there’s got to be a hook for why this thing interests us as fans of the racing genre. You probably know where this is headed.

Sony is running GT Sport‘s opening cinematic on the display to highlight the TV’s capabilities. Considering this sizzle-reel already looks stunning on 1080p and 4K displays available right now, we can only imagine how fantastic this looks in action. It’s also a huge credit to Polyphony Digital to see the electronics firm relying on its creation to show off Sony’s new toy.

Way back in November 2016, Polyphony gave a breakdown of the technical capabilities of GT Sport. At the time, the PS4 Pro was new, and Yamauchi-san had discussed the “future-proof” nature of the BT.2020 standard. Coincidentally, the system supports up to 10,000 nits of brightness. It appears we’re living in the future, then.

You can catch a glimpse of the video on Digital Trends’ report on the display. Unfortunately, the glory of the X1 can’t really be captured by a clip like this. Attendees are the only ones fortunate (for now) to see an 8K 10,000 nits display in action. Who knows, perhaps this will become the norm in the near future.

Thanks to hankolerd for bringing this to our attention in the GT Sport sub-forum. Featured image—which isn’t a GT Sport one—courtesy of Forbes.

8K ResolutionCES 2018HDRSony
60 Comments Discuss this post in our forums...
Can You Beat the Impossible Gran Turismo Quiz?

Gran Turismo Sport 590 Jan 20 by Andrew Evans
Keeping it on the island will be the key to this week’s three GT Sport Daily Races. The new set of events all pose a similar challenge, whereby a loss…

Gran Turismo Sport 590 Jan 13 by Andrew Evans
There’s a certain sibilance surrounding the circuits in this week’s set of Sport Mode sprints. The new selection of three races features some friends from right back when GT Sport…