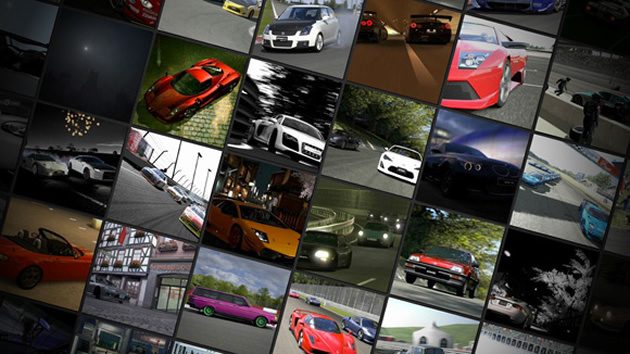 As reported a month ago, the Photo Stream service of Gran Turismo 5 has now gone live. Using this function, any photo set by any player to “Share with Friends” will be anonymously published to the official Gran Turismo website for anyone to see, rather than limiting your works to only the people on your PSN Friends list. There is, however, a small catch in that the service is not available yet to users outside Japan and Asia:

“The new “GT5 Photo Stream” service has been started on gran-turismo.com. In GT5 Photo Stream, photographs taken in the photo mode of Gran Turismo 5 and set to “Share with Friends” are be shown in a list on a webpage, and can be viewed publicly by anyone. […] This service is initially limited to Japan and Asia.”

Other regions’ players have been greeted by the following update to the original February announcement:

“[March 15 Addendum] In the following article, the commencement of the GT5 Photo Stream service was mentioned as being “With the coming Gran Turismo 5 update planned for March 2012. However the release timing for the next GT5 update has been postponed, together with the GT5 Photo Stream Service. We appreciate your patience as the next GT5 update is prepared, and thank you for your understanding.“

You can already view photographs submitted by eligible players on the official site for Japanese and Asian users since the service went live at 1200 UTC. The images are available at a reduced resolution, with a width of approximately 1024 pixels.

Photomode
The original comments for this post are no longer available.
F1 2020 Review: A Winning Formula

Gran Turismo Sport 301 Jul 6 by Andrew Evans
GT Sport has flipped its 2020 yearbook into a new week, and that means it’s time for a new set of three Daily Races. The mix is the typical spread…

Gran Turismo Sport 212 Jul 2 by Andrew Evans
There’s a rare chance to get your hands dirty in the newest set of GT Sport Time Trials, which start today. Over the next 14 days, you’ll be competing against…

Gran Turismo Sport 1868 Jul 1 by Andrew Evans
The second stage of the official Gran Turismo Sport 2020 FIA Online Championship comes to a close this weekend. That means we’re only a few days away from the third…

Gran Turismo Sport 301 Jun 22 by Andrew Evans
Three more Daily Races have arrived to mark the new week in GT Sport, and the line-up is a pretty unusual one. Of the three, it’s Race B that provides…