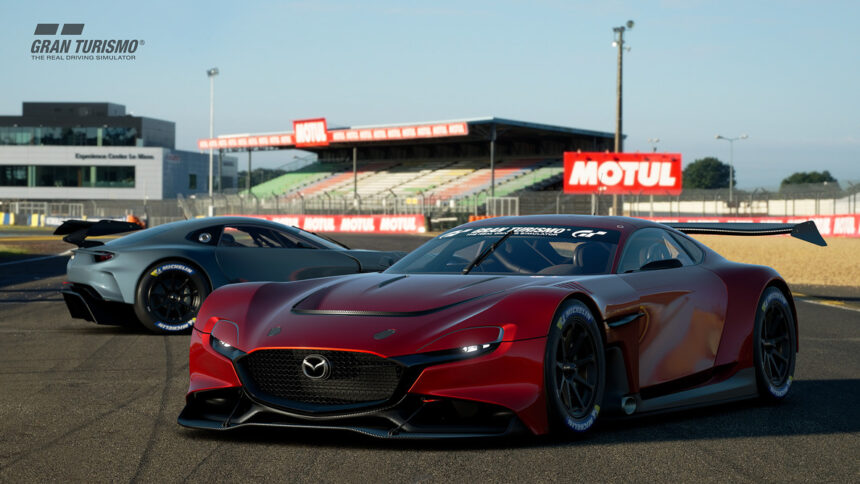 There’s a new GT Sport update coming tomorrow, May 22, and it introduces a car first teased at the 2019 World Final in Monaco.

Yes, the Mazda RX-Vision GT3 finally hits our hard drives on Friday. To mark the debut of a brand-new — and Gran Turismo exclusive — race car, Polyphony Digital has released a trailer dedicated to the machine.

Although it bears the word “Vision” in the name, the Mazda is not a Vision Gran Turismo car. In this case “Vision” is a generic motor industry term used for concept cars that showcase designs and technology that may form part of the brand in the near future.

The original RX-Vision was one such car, designed by Ikuo Maeda — the man responsible for Mazda’s current “Kodo” design philosophy, the Mazda LM55 Vision GT, and son of Mazda RX-7 designer Matasaburo Maeda — for the 2015 Tokyo Motor Show. It made quite a few headlines at the time, thanks to stunning looks and the suggestion of a rotary engine — branded as “SkyActiv R”.

This GT3 version is a racing concept based on that 2015 car, sporting huge aero surfaces and slick tires. We can also hear that, for GT Sport at least, the RX-Vision does indeed use a rotary engine. The clip above has the unmistakable wail of a rotary although, other than the fact it’s a quad-rotor, the exact configuration is unknown.

Mazda hasn’t made a rotary with anywhere near the stock 562hp output of the RX-Vision GT3 since the early 1990s. This might suggest a new development in the rotary family, a four-rotor based on the Furai’s 450hp triple, or simply the LM55’s engine (and sound sample) dialed back a little.

Players will be able to get their hands on the RX-Vision GT3 when the update lands on Friday. It will also immediately become eligible for Gr.3 category races in the game, including the FIA Manufacturer Series. Anyone not currently signed to a manufacturer will be able to sign for Mazda and drive it at next weekend’s Interlagos race. There’s also an opportunity to switch manufacturers at the end of the current round.

Gran Turismo Sport 6 Nov 28 by Andrew Evans
The second of this year’s Regional Finals in the 2020 FIA Gran Turismo Online Championships is soon to get underway, with 16 drivers from the Americas fighting for four places…

Gran Turismo Sport 2077 Nov 24 by Andrew Evans
While the finalists from the official 2020 FIA Online Championship season are fighting for their World Finals places right now, there’s still plenty of racing for the rest of us.…

Gran Turismo Sport 656 Nov 23 by Andrew Evans
It’s all about racing cars in this week’s new set of GT Sport Daily Races, as players have a choice between three different types of racing machine. Race A this…