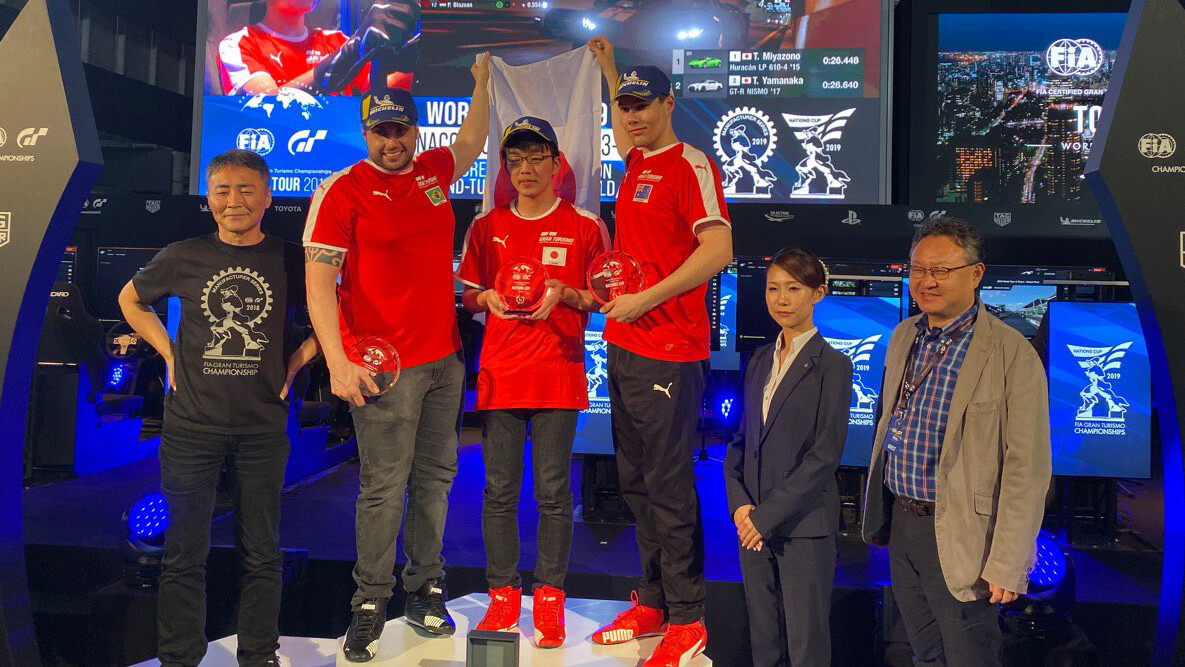 Local driver Ryota Kokubun has come through a rather chaotic event in Tokyo to claim the final automatic spot at the World Final in Monaco.

The Japanese driver, and Asia champion from 2018, becomes the first competitor to win their home event in this season’s World Tour.

Despite Kokubun’s obvious abilities, it’s fair to say it’s an unexpected result. He’s been at every event so far this year and put in solid performances, but only made one final before today’s. That put him outside the top ten in our driver rankings, but he immediately set about turning that form upside-down in qualifying.

The first session, held at what would be the combination for the final with the F1500T-A formula cars at the Circuit de la Sarthe, saw Kokubun finish behind only countryman Takuma Miyazono, and only by 0.001s. That put him through to the superpole shootout, where he repeated the feat. Miyazono, on form right now, took pole from Kokubun, with Rayan Derrouiche in third. 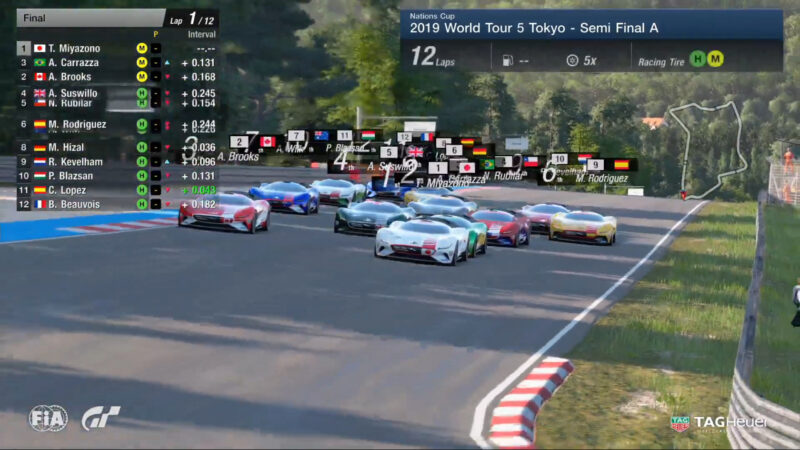 This race saw the first ever red flag at a World Tour event, and it came amid some apparently unrelated chaos. Driving the new Jaguar Vision Gran Turismo Coupe, a huge first corner incident totally rewrote the race order. Rick Kevelham of the Netherlands took to the grass off the lights and, possibly with dirty tires to blame, missed his braking point with catastrophic results.

The red flag, reportedly due to a technical fault, reset the grid except for Kevelham. Unimpressed by the display, the stewards relegated the Dutch driver to the back of the grid. Despite a prominent warning to all drivers to respect driving standards, the restart was little better — perhaps with 1000hp EVs on a tight road course being a factor.

A tight first lap saw Adriano Carrazza and Andrew Brooks leap to the top of the standings, but another huge incident, this time at the far hairpin saw an incident involving Brooks, Coque Lopez, Nicolas Rubilar, Manuel Rodriguez and Miyazono almost completely re-order the field.

With some clear air at the front, Carrazza and Lopez made hay on the medium tires, stretching a five-second lead. Rubilar, recovering from that first lap incident, had dragged himself up to third on the hard tire. The pit window opened on lap four, shaking the order up yet further as various different strategies came into play. While most drivers who’d started on the hard chose to almost immediately change to soft, some — notably Rubilar — opted to run much longer.

The drivers seemed to struggle with the car, with numerous incidents up and down the field. Race leader Carrazza, Rubilar, and Adam Wilk all found the unforgiving barrier on the exit of the final corner, while few could run side-by-side into turn one. Miyazono in particular seemed the focus of several incidents.

However, as the lap count ticked away Carrazza continued to guide the car to the checkered flag. Following him home was Coque Lopez — continuing his form of never needing a repechage — with Rubilar and Wilk claiming the two other qualification spots. 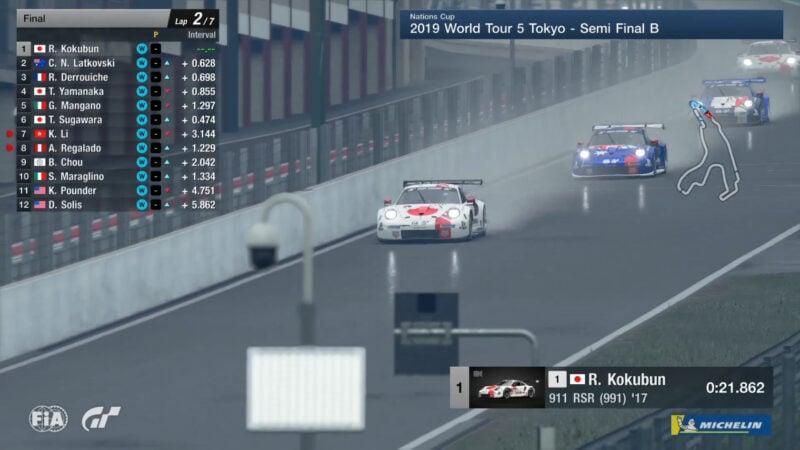 After a rather madcap first race, the recipe for the second might have seemed a bit like an invitation to do it all over again. A wet version of a track the drivers cannot practice at home, in rear-wheel drive race cars? Sounds like a disaster waiting to happen.

However, with the nice, wide asphalt at an F1-grade circuit, the mayhem never truly arrived. The second semi-final proved a much more studied race, and with no pit stops required it was simply a case of thinking about road position rather than strategy.

All of the major incidents occurred on the first lap. Right away, Daniel Solis was almost ruled out of contention. The American driver lost control of the Porsche in the Bus Stop chicane even before the start line. Kin Long Li of Hong Kong — our team-mate in our Pro-Am victory — was the next driver in trouble, as he made contact when the cars bunched up at La Source — the incident pushing Salvatore Maraglino out and back into 11th.

Meanwhile Kokubun, Cody Latkovski and Derrouiche were busy getting away from the cars behind. Although you could throw a towel over the three, they seemed to be working well together to draw out a couple of seconds’ advantage over Tomoaki Yamanaka in fourth. Latkovski, ever the competitor, wasn’t letting Kokubun having it all his own way, but a small penalty for track limits at Raidillon kept the order intact.

That meant the race for the final spot was the focus. Yamanaka and Giorgio Mangano, clear of Tatsuya Sugawara in sixth, were in a race-long scrap that seemed like it could go either way. However Mangano made the move into Les Combes on the penultimate lap, sliding the 911 past through the apex, and never looked back.

With the top three finishing in the same order they’d been throughout almost the whole race, that means Kokubun, Latkovski, Derrouiche, and Mangano made it through to the final. 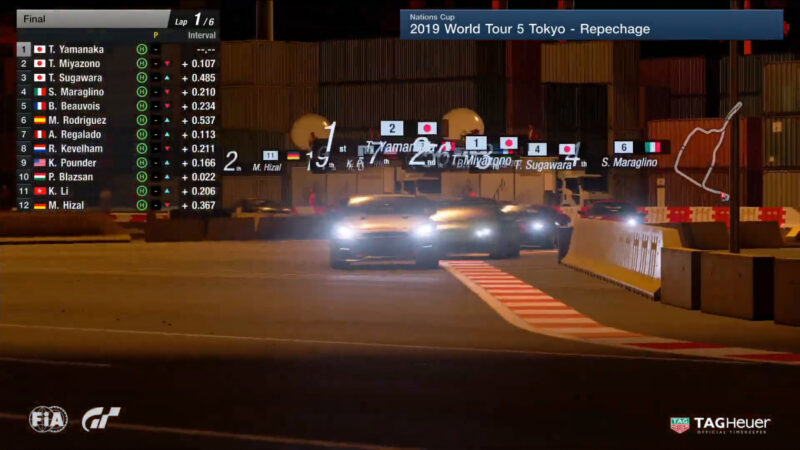 The Repechage is usually a bit of a coin toss, and for the Tokyo event the race was a little less outside the box than usual. Taking on the (dry) Tokyo Expressway South Outer Loop — a track the competitors will be familiar with after its introduction at the World Final last year — the competitors had an N500-class lottery. It’s a combination that wouldn’t be unusual to find in a Daily Race.

That, and probably a stern reminder from the stewards after that first Semi-Final, lead to far less door-banging that we’re used to in the Repechage. Of course that’s not to say that there was none!

In the initial stages, Miyazono seemed to lose his way somewhat as Yamanaka breezed past the Huracan. However Miyazono retook the place on the next lap and didn’t look back. Under further pressure from Baptiste Beauvois, Yamanaka made an error and put the GT-R into the barriers, allowing the NSX to coast through.

A race-long battle ensued between six drivers, with Yamanaka, Rodriguez, Maraglino, Regalado, Sugawara and Hizal all looking like they could finish anywhere from third to eighth. At any given corner, any one of them could be at the front or rear of the pack. As they pushed to score the qualification spot, mistakes crept in — but every incident seemed to affect the driver immediately behind (or alongside) too.

Ultimately in came down to who made the fewest and the least severe errors. That proved to be Maraglino and Rodriguez, with the unfortunate Yamanaka ending in fifth. 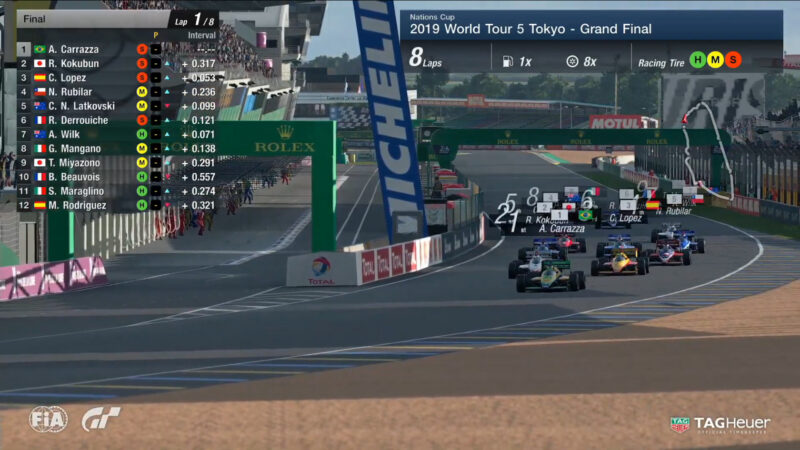 The race for that final automatic qualification spot began with an unusual standing start. Pole man Carrazza got the best of it, with Kokubun following him — both on the soft tires — through the Dunlop Curve for the first time of asking.

GT Sport’s fictional 1980s F1 cars are a bit tricky to drive, with sudden spikes of turbo boost leading to loss of traction. However it was the 1980s brakes that affected Derrouiche. Under slipstream from Latkovski, the Frenchman missed his braking spot at the second chicane and took a trip straight to the gravel.

Kokubun was making the slipstream work for him as he swept round Carrazza on the drag to Indianapolis. However the Japanese driver made an error in the Esses on lap two, allowing both Carrazza and Lopez — also on soft tires — past. Meanwhile the guys at the back of the pack were starting to show their strategic hand. With a minimum two laps required on each tire grade, those medium and hard runners in the back five were swapping as soon as they could and looking to run the last four laps on softs.

The three front-runners were busy making those soft tires work. Latkovski, in fourth and the leading medium runner, was dropping off the slipstream with a five-second deficit. Unexpectedly, Kokubun — who’d got back past Lopez on the Hunaudieres — and Lopez pitted on lap three, allowing Carrazza to run an extra lap without the pressure from the rear.

Carrazza made that lap pay, pulling out a 1.5s gap from Kokubun. The two drivers maintained their places through the middle stint, with both pitting at the end of lap six for their mandatory two-lap stint on hard tires. However the Brazilian had used more fuel, and Kokubun leapfrogged him in the pits.

The positions almost immediately swapped as Kokubun managed to draw 1.5s of penalties for exceeding track limits. With all pit stops done it became a sprint to the line, and the three front runners — all on hard tires — had to defend from Latkovski and Miyazono now on softs.

An extraordinary finish to lap seven saw Miyazono leap up into third. Coming into the Porsche Curves, Latkovski and Lopez tripped over one another — although the stewards harshly issued a warning to the Australian. This resulted in the Spaniard running wide first on the right-hand first corner and then again on the second left. Miyazono somehow found space that didn’t seem to be there and passed both before the Ford Chicane. That allowed Carrazza and Kokubun to escape at the front.

However, Carrazza wasn’t having it all his own way. Exceeding track limits at Tertre Rouge, he picked up half-second penalty of his own. That put Kokubun right onto his gearbox, and then past into the second chicane. The slipstream allowed Carrazza to retake the lead into Mulsanne, only for Kokubun to slip past in the same place he had on lap one.

As Carrazza ran wide leaving Arnage, Kokubun broke free, but now Latkovski was back in contention — with the lead four only two seconds apart. Kokubun seemed to have it wrapped up, but an incredible late braking move in the second Ford Chicane brought the Brazilian back level.

It was a brief position swap; Kokubun had the inside line for the drag to the finish line, taking victory by just 0.4s. Latkovski took third, with Miyazono fourth from Lopez.

Andrew Evans · Oct 27, 2019· Comments
Michelin, official Tire Supplier and Technical Partner of Gran Turismo, is staging a special online competition for players in south-east Asia and Oceania, with an all-expenses paid experience at Yas Marina, Abu Dhabi, for the winner.

Andrew Evans · Oct 27, 2019· Comments
A new set of Gran Turismo Sport Daily Races is now available, with the unannounced change to a four-weekly cycle now seemingly the standard from this point forward.

Andrew Evans · Oct 27, 2019· Comments
Following on four weeks from the last set, a new set of Daily Races is now available in Gran Turismo Sport as players get used to the new scheduling for the 2017 title.

Andrew Evans · Oct 27, 2019· Comments
For the first time in nearly a month, there’s a new set of Daily Races in Gran Turismo Sport for players to enjoy for the foreseeable future.

Andrew Evans · Oct 27, 2019· Comments
It’s the inevitable fate of any game that, once it is succeeded, it will eventually wither away as support is withdrawn. While this process usually takes months at a minimum, GT Sport seems as if it could be sidelined in record time.

Andrew Evans · Oct 27, 2019· Comments
Despite being superseded by Gran Turismo 7, GT Sport’s Daily Races seem to be continuing on their weekly cycle — for the time being at least.

Andrew Evans · Oct 27, 2019· Comments
Although Gran Turismo 7 is now out, GT Sport shows no signs of slowing down any time soon, with a new set of Daily Races now available to players.

Andrew Evans · Oct 27, 2019· Comments
Gran Turismo Sport will finally be superceded by Gran Turismo 7 this week, but there’s still plenty to be getting on with in the current title — starting with a new set of Daily Races.