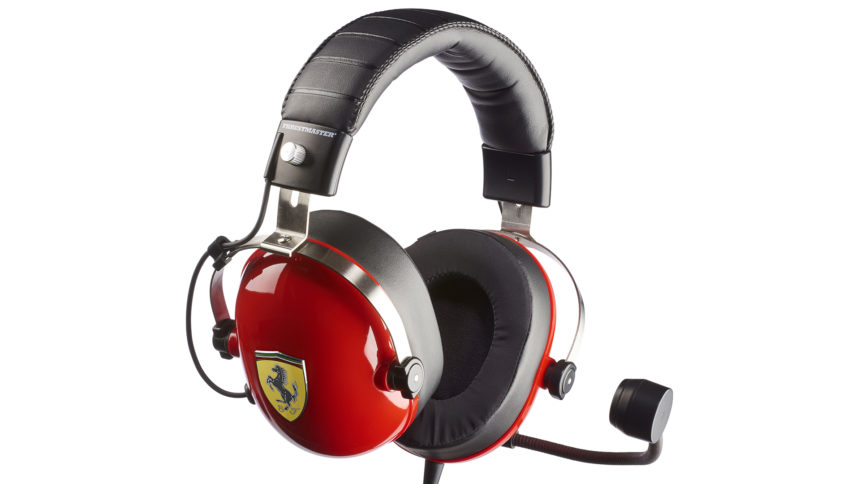 Thrustmaster has a new addition to its Ferrari line up of peripherals. Joining the T80, TS-PC, and 250 GTO wheel add-on is a new Ferrari-branded accessory.

Called the T.Racing Scuderia Ferrari Edition headset, it was introduced this past weekend at the Ferrari Store City Race in Milan, Italy.

Like any good Ferrari product, it’s the perfect shade of Rosso Corsa. It also prominently features the famous Prancing Horse logo on the side of the earpieces.

However, this is not simply a standard headset with a logo on it. Instead, Thrustmaster designed its new headset to mimic the ones worn in the F1 paddock.

The inner working of the headset looks pretty good too. For the drivers, Thrustmaster went with 50mm/2” analytic drivers to provide the best possible sound. From there, it then set about tuning the frequency to balance sound across bass, mids, and treble.

This combines to put out 116dB of sound with less than 1% distortion.

These specs put it in the same class as other premium gaming headsets. Both the Razer Man’OWar and Kraken are slightly better on paper though. But the Ferrari headset does hold the edge over a few of the Logitech G series units.

For comfort, Thrustmaster made sure the cushions were up to snuff. They are one inch thick and use both memory foam and gel layers. This allows the headset to seal around the ear creating passive noise isolation.

Unfortunately, the headset is not wireless. However it does come with a 10ft cable which is plenty long enough for those using cockpits.

For compatibility, anything with a 3.5mm headphone jack will work. Thrustmaster did say though that it’s optimized for PS4, Xbox One, Nintendo Switch, and PC.

No word on price for headset yet, but we think it’ll mirror other premium units. This should put it right around the $125 mark. The Ferrari branding could drive this up a little bit though.

FerrariThrustmaster
19 Comments Discuss this post in our forums...
F1 2020 Review: A Winning Formula

F1 2020 48 Jul 2 by Andrew Evans
With just over a week to go (or less) until F1 2020 arrives, Codemasters has revealed some more information about the variety of features the game will include. We’ve already…