Toyota is kicking off the North American International Auto Show with the reveal of their latest flagship concept – the FT-1 Concept coupé.

This concept is not Toyota’s Vision GT concept, as explained on the Gran Turismo website:

“In addition to the creation of the FT-1 in GT6, Toyota is also represented in the groundbreaking Vision Gran Turismo project. A celebration of the franchise’s 15th anniversary, the project invites leading brands to design their vision of the future of driving. The resulting concepts will be released exclusively on GT6 later in the year.” 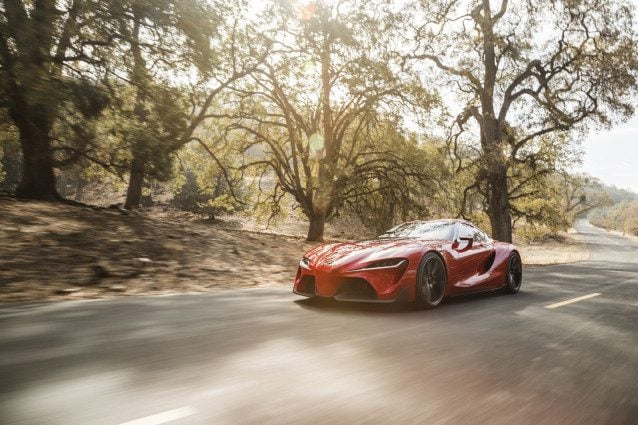 The FT-1 was designed by the Calty Design Research group as a tribute to Toyota’s classic sports cars, staples in Gran Turismo’s history.

The name says it all. FT-1 stands for “Future Toyota,” and the number “1” represents the ultimate. According to its designers at Calty Design Research, the FT-1 Concept is the ultimate expression of a Toyota coupe design, building upon Toyota’s rich sports coupe heritage dating back to the 2000GT, Celica, Supra, MR2 and most recently Scion FR-S. In addition, the concept draws inspiration from Calty’s more recent sports car concept work such as FT-HS (2007) and the Lexus LF-LC (2012).

The project started nearly two years ago and represents a labor of love by a passionate, dedicated and gifted Calty design team. “The FT-1 is a dream-project for a designer and car enthusiast like myself,” said Alex Shen, Calty’s Studio Chief Designer. “Our team was heavily influenced by Toyota’s sports car past, especially Celica and Supra, and we sought to capture some of that history. It is an aggressive, track-focused sports car concept with a presence that has been amplified for shock and awe.” 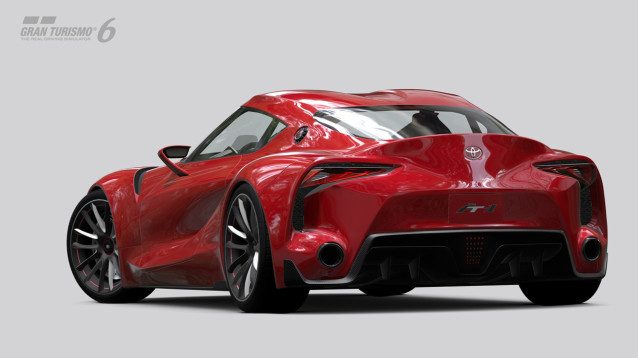 Toyota describes some of the features you can expect to find on the concept:

The front engine rear-wheel drive configuration locates the cockpit far rearward within the wheelbase to improve weight distribution. This design element also helps create the classic sportscar proportions one would expect from a vehicle poised to dominate even the most challenging road course. The cockpit’s wraparound windshield and side glass openings are a distinct nod to the design of the legendary Toyota 2000GT.

The interior is a focused, highly functional “place of business” that locates the driver at the controls behind an F1 inspired steering-wheel. The intimate, low slung cockpit has its A-pillars set far back to help optimize cornering vision and sensation of the cabin’s intimacy. A delta-shaped display zone surrounds and integrates the driver to provide an exhilarating sense of being connected to the vehicle. The cockpit’s sense of minimalism adds to the purposefulness of the driver-focused environment with an emphasis on light weight components such as the composite seat covered with just the right amount of padding in only the areas that come into contact with the driver. A color heads-up display keeps the driver’s attention on the road ahead, with vital information projected just above the steering wheel within the driver’s line of sight.

While technical specifications do not accompany the concept, one can assume that the FT-1 represents an ideally balanced front-engine, rear wheel-drive layout that is powered by a high-technology, high performance internal combustion engine. Beneath a transparent glass hood, an ambiguous engine cover hides a powerplant left to the imagination of the onlooker. 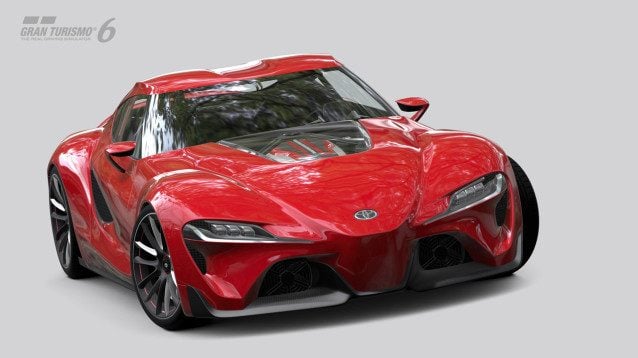 Polyphony Digital worked hand in hand during the development of the FT-1 Concept:

In preparation for pitching the concept to Toyota management, Calty worked with Polyphony Digital, creators of the popular Gran Turismo driving simulator, to bring FT-1 to life in a virtual world that captured the excitement, passion and performance conveyed by the concept model. Toyota executives were offered the opportunity to take FT-1 for a timed lap around a computer-generated Fuji Speedway. Behind the wheel of the concept, Toyota president Akio Toyoda, an accomplished race car driver, completed the virtual circuit faster than his best real-world lap time at Fuji in his LFA. From that moment, he was convinced and the concept was approved to be built in model-form for the international auto show circuit. 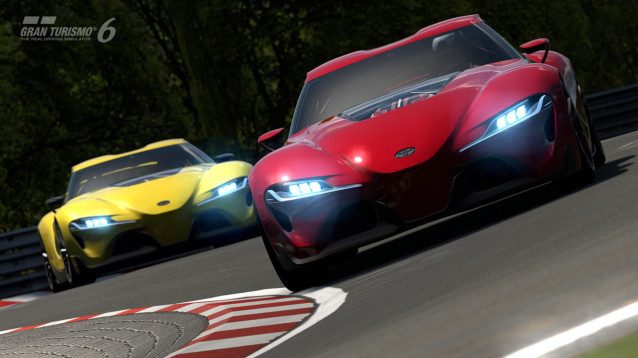 The FT-1 will be available for download starting tomorrow, January 14th, as free DLC in the same style as the BMW M4, coming with a dedicated Seasonal Challenge. After test driving the latest car in GT6, be sure to discuss it with fellow enthusiasts in our forums.