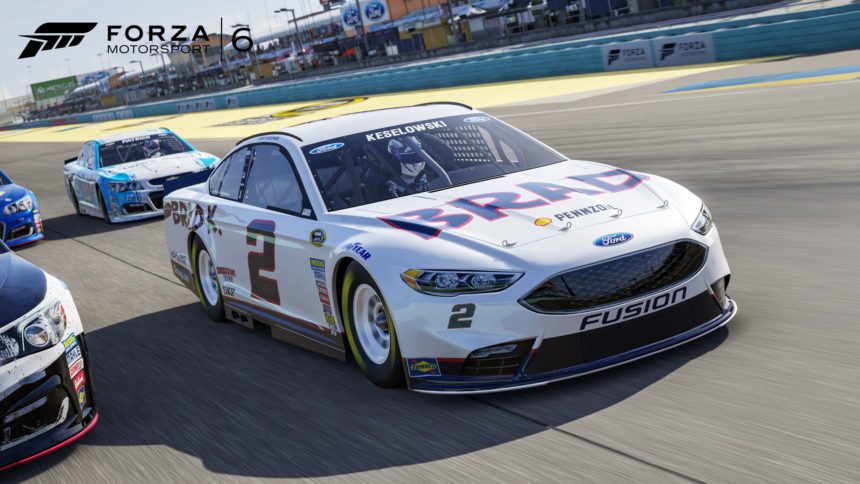 Leaving nothing to superstition, Turn 10 have officially announced (thus confirming earlier reports) the NASCAR Expansion for Forza Motorsport 6 that will be available today. Releasing hot on the heels of this month’s Hot Wheels Car Pack, and the debut of Forza Motorsport 6: Apex on Windows 10, the expansion officially introduces America’s most popular motorsport to the franchise.

The expansion features an all-new NASCAR World Tour career with over 10 hours of racing, taking the new lot of racing machinery in an interesting direction by way of “What if?” racing scenarios. Now you’ll have the opportunity to discover for yourself how any one of the 24 stock cars would fare against the likes of Australian V8 Supercars or WEC prototypes.

The expansion will not only include cars from the 2016 season from teams the likes of Joe Gibbs Racing, Chip Ganassi Racing and Hendrick Motorsports, the new content will also enlighten players to the history and technology of the sport where drivers Jimmie Johnson, Kurt Busch and Chase Elliot will serve as your mentors in the “Voices of Motorsport.”

As mentioned previously, the expansion will introduce 24 new cars to the game and will further increase the game’s stellar list of real-world tracks, introducing Homestead-Miami Speedway with three different layouts, as well as rain variations. The cars are listed below:

In addition to the new career mode and exciting lineup of racing metal, the tension of pack racing will be complimented by new features. Rolling starts, a new Quick Stop mode, and a more complex drafting model have all been introduced to flesh out the expansion, making it feel like a true part of the game. These new features will be included in this month’s content update that will preface the availability of the expansion. We’ll have the full breakdown on the title update in a few hours once it goes live.

20 new Achievements totaling 250 additional Gamerscore also makes way with the expansion, in addition to NASCAR-themed Rivals, Leagues and multiplayer hopper events allowing players to experience the grit of the sport in their places of comfort. Gamers will find all 24 cars instantly added to their garage upon purchase. It’s available now on the XBox Store for $19.99.