One of the biggest announcements from Xbox’s E3 showing was the unveiling of Forza Horizon 3 – the latest installment in Playground Games’ open-world racing series – with the game taking center stage at the keynote conference on June 14th. The showing included an official reveal trailer and a small discussion about the game’s features. However, Microsoft may have teased (accidentally or intentionally) an unannounced manufacturer for FH3 as willbsn13 has spotted on the GTPlanet forums. 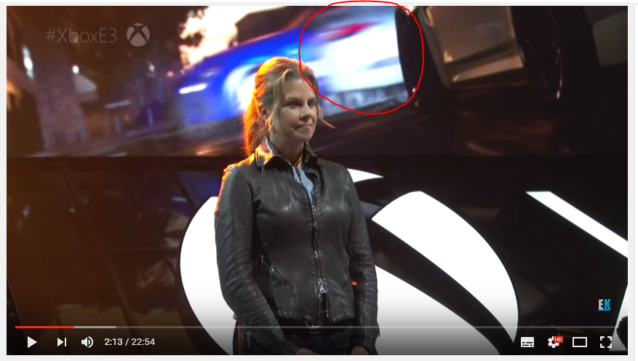 Between the video times of 2:10 and 2:15, the screen behind the Playground Games rep shows an easily recognizable ‘Ute’ type vehicle – very popular in Australia – but also a mysterious but recognizable Supercar. This is where it gets interesting, this car is most likely to be a RUF but it is possible it could also be the Porsche GT3 RS 4.0 – as indicated by it’s looks and the grey stripe visible on the side.

It’s certainly an interesting catch, given Assetto Corsa’s recent Porsche license reveal it’s entirely possible the GT3 that featured in Horizon 2 and Forza Motorsport 6 could be making it’s way down under with the Horizon festival. As it stands, neither RUF nor Porsche have been confirmed to appear in FH3 but from this footage it seems we’ll get either or maybe even both. Let’s not forget that RUF was mysteriously absent in last year’s FM6.

Assetto Corsa recently securing the right to use the Porsche license has left driving game fans dreaming that their own favorite series could be next (With Ian Bell of Slightly Mad Studios also sparking some talk). Forza has had a fair share of Porsche models before – even with EA’s existing licensing deal being intact – though it’s long been assumed Microsoft has had to cough up a hefty asking price to do so. Due to this, the prospect of having Porsche in-game from release is tantalizing to say the least. Horizon 3 looks to be the most ambitious Forza game to date, and the addition of some German goodness would definitely add to the fun.

Gary Slater · Jun 24, 2016· Comments
We suspected that it may be coming sooner or later, but now Turn 10 has officially confirmed the news: Forza Horizon 3 is reaching the end of the road.

Michael Leary · Jun 24, 2016· Comments
It appears Forza Horizon 3 still has some life left in it – at least, enough for what looks to be a final hurrah.

Michael Leary · Jun 24, 2016· Comments
Big savings have once again come to pass for the Forza series, courtesy of Deals With Gold. This week, Microsoft has combined Forza Motorsport 7 and Forza Horizon 3 into a neat bundle. If you’ve yet to make the jump, now is as good of a time as any.

Kyle Patrick · Jun 24, 2016· Comments
Amidst all the news about the upcoming Forza Horizon 4 this past month, an impressive stat on its predecessor flew under the radar. According to Ralph Fulton, FH3 has had over 9 million players since its September 2016 launch.

Brendan Rorrison · Jun 24, 2016· Comments
Xbox Live Gold members can pick up two discounts on substantial Forza DLC. With reductions for Motorsport 7 and Horizon 3, those looking to enhance their experience should have a look at what the sale has to offer.

Kyle Patrick · Jun 24, 2016· Comments
Playground Games is keeping the Forzathon events coming for its open-world Forza spin-off. Players will have regularly-scheduled challenges all the way into February 2018, according to a new set of Xbox achievements.

Gary Slater · Jun 24, 2016· Comments
The latest Forzathon challenges are now live for Forza Horizon 3 players. The focus for this weekend is all on hypercars. Going under the name “Speed Is Key”, the newest challenges will see players putting their foot down in the world’s fastest cars.

Gary Slater · Jun 24, 2016· Comments
This weekend marks one year since Forza Horizon 3 was first released. To celebrate the occasion, the latest Forzathon events offer players a new batch of car and manufacturer-specific challenges.