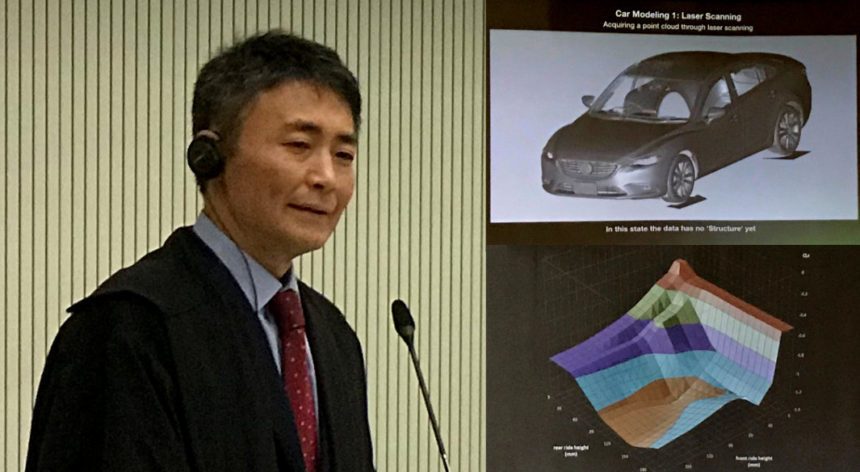 In the days following the launch party for Gran Turismo Sport in Modena, Italy, one of the country’s top engineering schools awarded GT series creator Kazunori Yamauchi with an honorary doctorate.

After accepting the degree, the University of Modena and Reggio Emilia asked Yamauchi to give a lecture to its students about the production of Gran Turismo. We were able to attend the unique presentation, which offered a rare look behind-the-scenes at how the engineers and artists at Polyphony Digital work.

First up was the car modeling process. The team laser-scans both the exterior and interior of cars, resulting in a “point cloud” of unstructured data. From there, Polyphony’s human artists manually convert the raw data into a proper structure of 3D polygons. 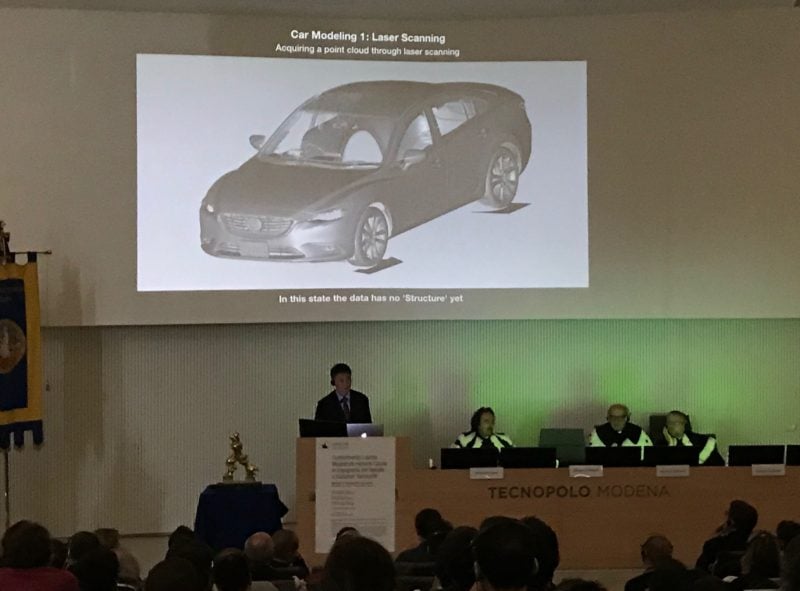 “Each car is created, from beginning to end, by a single artist on our staff,” Kazunori said, confirming Polyphony’s meticulous approach to its work. “This process takes a lot of experience and skill. Converting the point cloud into structured data takes about three months, and once the data has structure, we start applying materials to it.”

Astute observers will note the presentation slides include the Lamborghini Countach LP400 in a Photo Scape. Considering the LP400 does not yet appear on the official Gran Turismo Sport car list, this is our first look and confirmation of the car in the game.

Kazunori continued his presentation on the modeling process for tracks, sharing photos and information about Polyphony’s laser-scanning equipment. The team uses a combination of stationary and mobile laser scanners, supplemented with photogrammetry (image-based modeling), resulting in data with various degrees of accuracy.

The stationary scanner provides the highest level of detail, providing 4mm of accuracy at a distance of 150m. The mobile scanners can cover more ground, but offer less accuracy of around 35mm. Once scanned, the track’s point cloud data goes through the same process of conversion to polygons by the company’s artists. 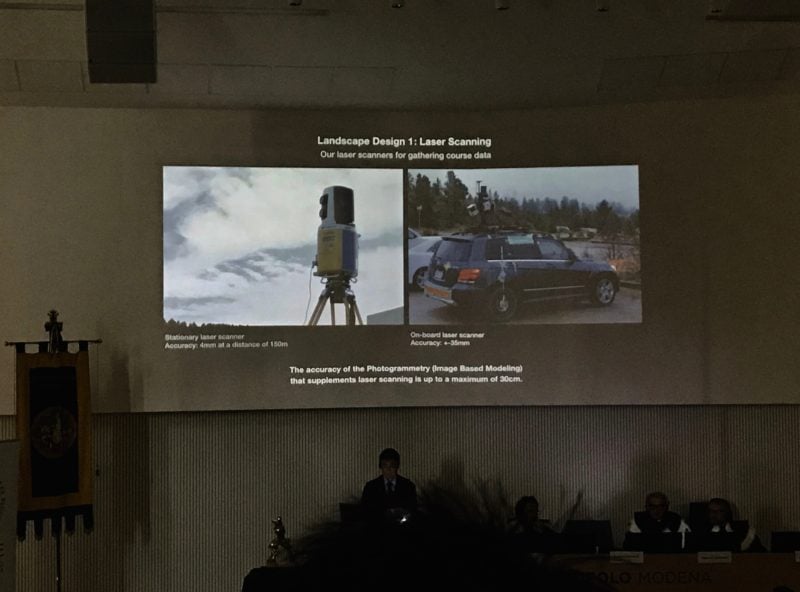 A photo shows the laser scanning equipment mounted on a modified Mercedes GLK. We’ve actually seen scanning vehicles before: you might remember the Ford Focus Polyphony used to scan the Isle of Man’s Snaefell Mountain Course when it visited the island in July of 2014.

Next up: vehicle dynamics and physics. Kazunori confirmed Gran Turismo Sport uses a single physics simulation model for all the vehicles in the game, with each car having “several thousand parameters” as input to that model. Specialized vehicle features like AWD systems, four-wheel steering, and hybrid systems are all handled individually. 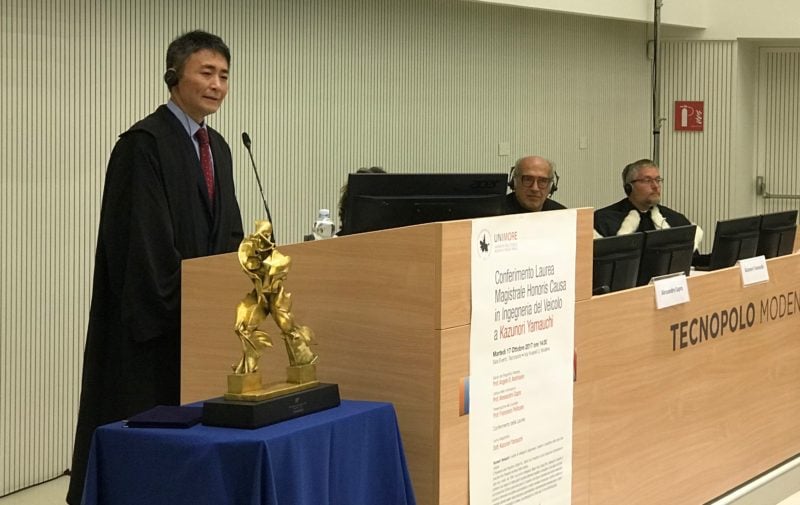 “The most difficult simulation is the tire model,” Kazunori said. “It was actually not that difficult for us to simulate tires that could match real-world lap-times; we did that accurately for the first time back in 2007. The difficulty comes in making that simulation drivable in the game.”

Some of the most interesting slides from the presentation discussed the game’s aerodynamics simulation. It sources data from CFD (computational fluid dynamics), using algorithms to determine the aerodynamic effect on a car’s body, and real wind tunnel testing. The simulation combines the data to create an “aero map” for each car. 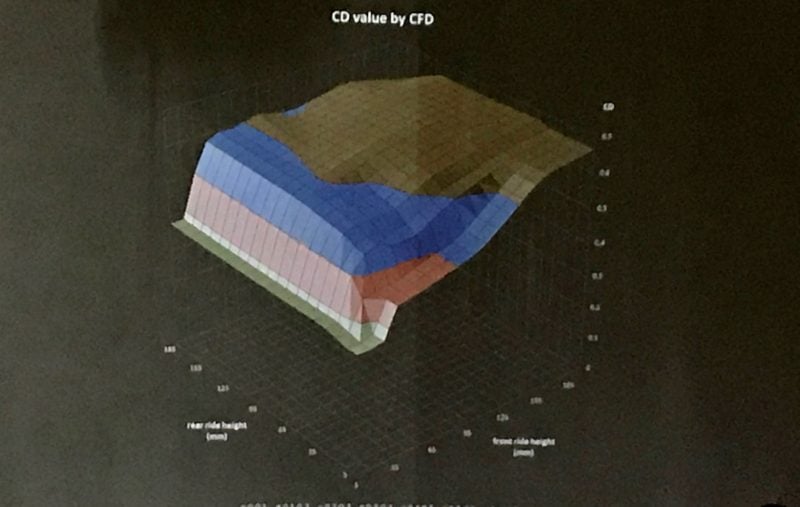 As you can see, drag is at its lowest when both ride heights are at their minimums, and the front ride height has the most significant impact on drag.

Aero maps can also be used to show the lift coefficient (CL). The aero map below shows how the ride height also affects negative lift at the rear of the car — better known as downforce. As you can see, rear lift is at a minimum (and downforce at its maximum) when the car’s front and rear ride heights are near their median values. 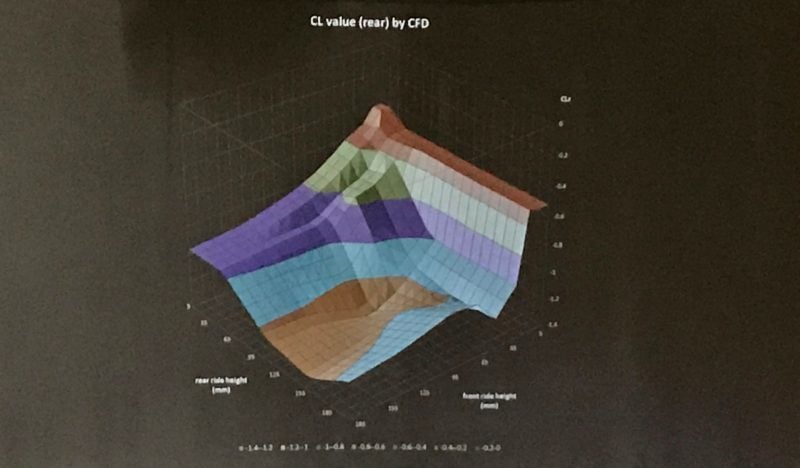 The aero map for lift on the front of the car is also intriguing. Although it has a more obvious slope, it reveals that the car generates maximum front downforce with a ride height of around 80mm. As the ride height goes below that number, downforce is actually reduced. 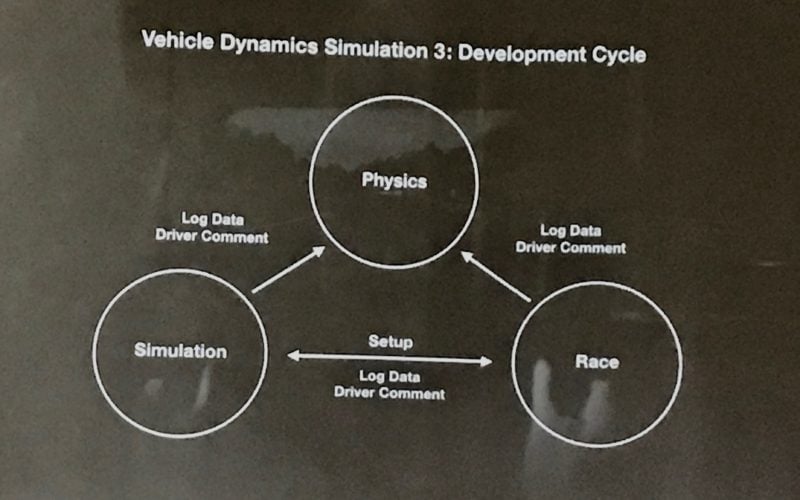 Yamauchi used a flow chart to demonstrate how the development cycle for the physics actually works. Polyphony Digital uses data from the game to help with car setup in real-world races (we’ve heard this before), then collects data from the real car and uses that to improve the simulation, in turn. The data, combined with driver input and feedback, ultimately defines how the car behaves in the game.

To demonstrate how it all comes together, the presentation also briefly showed rare videos of Gran Turismo Sport‘s debug mode. The mode reveals tire load and other variables which describe the car’s activity in the environment. He didn’t explain everything however, and the projector did not provide enough resolution to see the labels.

Nevertheless, it wrapped up a unique presentation that offered a refreshing departure for Yamauchi. It wasn’t about making new announcements or promoting game features; he was simply sharing how Polyphony Digital works, while hopefully inspiring the next generation of great Italian engineers.

Kazunori YamauchiPolyphony Digital
232 Comments Discuss this post in our forums...
Test Your Badge Knowledge With Our Car Logo Quiz