With the Formula 1 circus officially on summer break after last weekend’s German Grand Prix, Codemasters is taking advantage of the lull period and is showing off a new trailer for this year’s upcoming game, and are announcing a new championship — all with 14 days left on the clock until its release.

The expansive career mode in F1 2016 is a return to form for the franchise, and will span up to 10 seasons. Described as “the most immersive career mode [we’ve] ever featured,” it will introduce such new features as a car upgrade system that will ultimately allow players to turn back-marker teams into potent title contenders, manual race starts that will liven up getting off the line, and hospitality areas. All features (and many more) intended to heighten the level of immersion, blurring the line between the two realities. 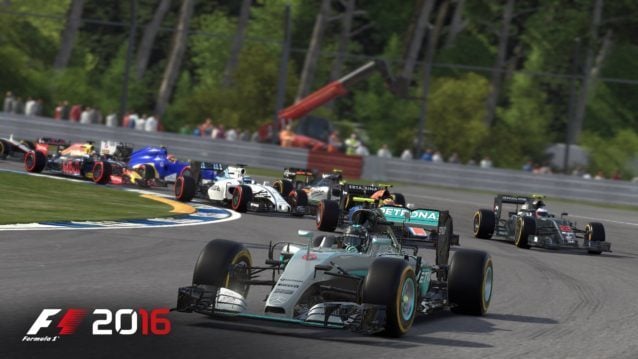 The Multiplayer Championship will be a new in-game mode pitting 22 players against one another over the duration of an F1 season. Players will be able to race as team-mates or have at it across different teams; either way things will ultimately come down to every man for themselves, there will only be one champion when everything is said and done.

That factor of tension will lend itself well to league racing, and championship progress can be saved allowing for a season over the course of many weeks. If you’ve missed an update or simply need a refresher, here’s a recap of everything currently revealed for this year’s title:

F1 2016 will be releasing on August 19th for all platforms, and is now up for pre-order. If you’re interested in the original reveal you can head over to the Codies Blog to see it for yourself, and remember to swing by our F1 games forum for more in-depth discussion.